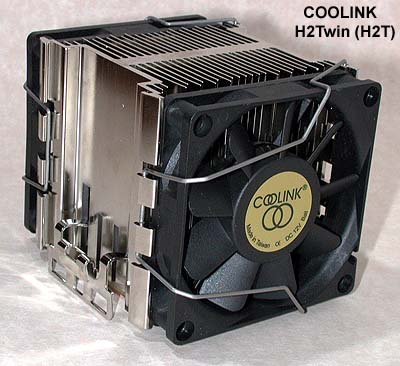 The good guys at Coolink were nice enough to send some samples of their heatsink called the COOLINK H2Twin (H2T). Coolink is a new face on the US scene. Currently, they are mainly sold in Eastern European markets. They are looking for US distribution, so if interested, drop them a line.

This is a twin fan model with the fans blowing into the center core. The airflow is quite good and there’s a fair amount of air coming off the heatsink’s top. For consumers who like “fail-safe” products, a twin fan heatsink has some attraction.

Looking down into the heatsink 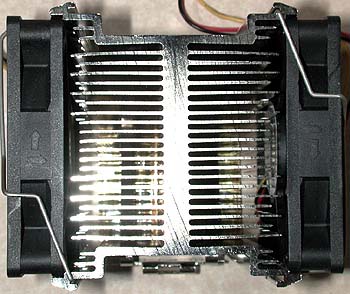 shows the “H” pattern – we are seeing more variations on this theme in the market recently. The center column distributes heat from the CPU core into the fins radiating from the core. According to Coolink:

The “H” shape aluminum base and fins are copper (inner) and nickel (outer) plated. This copper-plated surface further enhances the heat transfer efficiency.

I don’t know if it makes that much difference, but it’s an interesting detail. 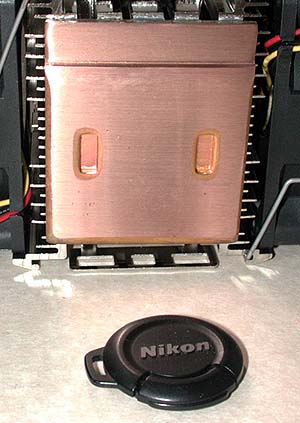 is flat but could stand a better finish – one sample showed pit marks in the base – lapping would be a plus. The base is soldered onto the aluminum top piece. Coolink did inform me that these units are “first production run” and that the finish will be better on subsequent units.

The clip is a good one – engages all three socket lugs. The only drawback is it requires a screwdriver to mount/dismount from the socket.

In summary, an interesting twin-fan, copper base, aluminum extrusion heatsink with a very secure clip.

The COOLINK H2Twin (H2T) was first tested on the CPU Die Simulator which gives results that are unaffected by motherboard influences. I then tested it on an Iwill KK266+, modified to read AMD’s on-die diode, as an example of what users might see on their systems.

With a better base finish, the COOLINK H2Twin (H2T) will most likely perform better, pushing it up further in the rankings. All told, this is a nice cooling solution for the performance and fail-safe minded consumer.

Thanks again to Coolink for sending this our way. They are looking for US distribution, so if interested, drop them a line. Their website shows a wide variety of designs available.

Some thoughts on PIV cooling and a performance test of Intel’s PIV heatsink. — Joe