The CoolIt Vantage ALC is not the first self-contained watercooling loop to hit the market, and certainly won’t be the last. We have reviewed several already at Overclockers.com: including the CoolIt ECO A.L.C. and the Corsair H50. The Vantage, however, is the most advanced self-contained watercooling product that we’ve seen to date, featuring an LCD screen, wireless-ready monitoring capabilities and customizable performance profiles.

This product fits my needs perfectly. My main aversions to watercooling include maintaining the loop, anxiety about leaks and the price. The CoolIt Vantage eliminates all of those concerns and is reasonably priced at $114, half the price of an average DIY loop.

The box is unassuming for such a highly-anticipated product. Simple blue and black coat the entire exterior of the package. Contents of the package include all the necessary brackets for LGA1156, LGA1366 and AM2/AM3+. Other than that, the Vantage comes fully-assembled, including a thin, perfectly-spread layer of CoolIT Pro ATC thermal grease (CoolIT kindly provided an extra tube of their homemade TIM to accommodate additional mounts for thorough testing of the Vantage).

Missing from the above specifications is information regarding the radiator fan. Before starting this review, I spoke briefly with Geoff Lyon, CEO of CoolIt Systems. He was kind enough to explain some of the decisions behind the scenes and about the product. When I inquired about the manufacturer of the fan, he assured me it was designed entirely from ground up by CoolIt. The fan is your standard 7-blade 120mm fan pushing air against the radiator. Users have questioned the decision to have the fan in push configuration instead of pull. After quite a bit of testing at CoolIt, this configuration was deemed best. Though I did not have a chance to investigate, a forums member with a different CoolIt product tested this theory . Similar results are to be expected with the Vantage. If users are still not satisfied with the configuration or fan itself, third-party fans are compatible with the Vantage’s fan RPM controller.

One of the most unique features is the customizable LCD screen located on the pump/CPU-assembly. The LCD displays the fan speed (in rpm) and coolant temperature (in °F or °C). Several menu choices are available by utilizing the simple two-button interface on the pump/CPU-assembly. Users need not worry about using the buttons while the computer is on, simply pressing lightly does not affect the position of the CPU-assembly nor result in any temperature fluctuations.

Fan speeds on the radiator adjust automatically based on the selected profile, choices include: Quiet, Performance or Extreme. Performance for each profile is outlined later in the review.

If that was the extent of the customizable features on this unit, it would have been enough. However, users can also alter the orientation and color of the LCD screen. This provides the ultimate flexibility for users who want the Vantage to match their case and color-scheme to perfection. All four orientations are available, as well as six color choices: White, Red, Purple, Green, Blue and Amber. The unit would look nice in a case with a side window.

The images included below give a general sense of the appearance of the LCD screen, but please note that in person the colors are much brighter. Unfortunately, my camera was unable to capture this. 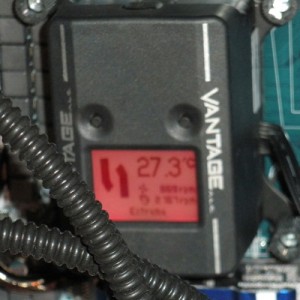 Users can also set the LCD screen to pulse, which turns the color on and off. At first, it sounded annoying, but after trying it, the feature is actually aesthetically pleasing.  The pulse is gradual, not at all like an annoying strobe light. CoolIt CEO, Geoff Lyon, explained to me the feature was intended to simulate the “heartbeat” of the computer. Kind of a cool concept, the Vantage pumping coolant to the heart of the PC, the CPU. Ultimately it makes me think the folks at CoolIt really thought long and hard when designing this product.

Installation really is as easy as CoolIt claims. Instead of outlining the details, excerpts from the User Manual are included to depict the simplicity of the process:

The tubing was extremely durable – almost too rigid in fact – which made it slightly difficult to bend in the correct direction for installation. This is not an overall negative however because it means the tubing is unlikely to leak.

Following installation the fan remained at a constant ~2450 rpm, the maximum fan speed. Thermal fan regulation was disabled as outlined in the instruction manual. After playing with several thermal control BIOS settings to no avail, I plugged the Vantage directly into the power supply using a 3-pin to 4-pin adapter. Even though the Vantage utilizes a 4-pin plug, it functioned properly when connected to the 3-pin interface on the adapter. In the scheme of things, this is not a big deal, however it did take some time and creativity to figure out this solution. A novice PC-builder may not have figured out a solution, so this minor issue is worth noting. This might be a motherboard compatibility issue.

At stock, the cooler barely broke 1,000 RPM at full load, which means you can barely hear the Vantage in action. Idle temperature was a solid 23.5 °C and load temperature was an impressive 42 °C. Clearly, this CPU needs more juice and more MHz to generate some real heat. Let’s see how the Vantage fared with 1.35 V at 4.5 GHz:

After applying a hefty 30% overclock and some extra vcore (1.35 V in total to be exact), the Vantage still held it’s own. This cooler keeps load temperatures under 70°C, even with a pretty large overclock running 24/7. For just about everyone (aside from our benching team maybe), the Vantage is a solid option even if you plan to overclock. However, I was surprised to discover such a small difference when comparing the three performance profiles. There was very little variation in the RPM, coolant temperature and not surprisingly, CPU temperature.  No matter how much stress was applied to the CPU, I was unable to heat it up enough to get the fan to run at the maximum RPM or show a large variation in performance among the three profiles. Using an i5 655k was probably not the best choice for this testing as it is 32nm and 73W TDP, so it tends to run a bit cooler than the i7’s. Hopefully at some point I can test the Vantage with hotter and more powerful chip to see how it fares. For now, I will remain impressed with the cooling prowess of the CoolIt Vantage.

This cooler fits my needs perfectly. If you are looking to do some overclocking and do not want to spend your time maintaining a DIY watercooling loop, then the Vantage is a great solution. For the price ($114.99 MSRP), this cooler packs a punch that many other products out there cannot touch.

Thanks to CoolIt Systems for supplying this product for review and Geoff Lyon for taking the time to explain some of the unique features. If you like the Vantage, stay tuned for a software package set to control various cooling products from CoolIt later this year, called Maestro. The Maestro ESP chassis control system will allow users the ability to control all fans within your system, monitor temperatures and generate custom performance graphs through the software package. Hopefully, I will get my hands on Maestro in a month or two for testing.

For more information on this product, check out Jolly-Swagman’s thread. He included several photos of his rigs (far better looking that mine) and results.

Corsair has been known for a long time for their great RAM, today we’ll be looking at the Hydro Series H50, their attempt at breaking into the CPU cooling market.

Today, Alphacool announched the launch of its ST25 full copper line of radiators. Measuring only 25.5mm thick, they are sure to come in handy for those who prefer smaller cases. The ST25 will be available in 120mm, 240mm, and 360mm.

Is your router getting too hot? Try water-cooling it! This tutorial covers everything you need to know from router selection, component selection, and putting everything together. If you like extreme cooling, this mod is for you!