As a regular of Overclockers.com, I was really taken by Joe’s article on Copper CPU Spacers after my many years of using them and equivalent methods on all my projects.

All the components of the CPU package – the heat spreader plate, the PGA/BGA package, the Slot 1 PCB or the Socket 370 – are all at a temperature higher that the cooling assembly. If all the “work” and “assumptions” that I have made over the years are correct, the addition of the copper spacer will ‘pull’ heat from the PGA/BGA package that was being transfered from the heat spreader plate and core, and in addition increasing the overall “contact” area of the cooling assembly, lowering the temperature even further.

But even with all my “assumptions”, Joe had tested and prepared a very well thought out article that cast doubt on everything I was basing my CPU modifications on. Either I was wrong about sub-ambient advantages of copper spacers or total ‘bonding’, or we needed to further the testing to “broaden” the understanding of the pro’s and con’s of the copper spacers being sold all over the internet, and this would be based on actual controlled testing.

Now in discussion with some of the “guys” at Intel, I was able to find out the thermal conductivity of the epoxy they used, but not the manufacturer’s name. Much to my surprise, the epoxy that I use from Epoxies, Etc., the 51-3100, had the same properties and was identical in color and consistency to that on the both 800E’s – a strange coincidence. I then ‘bonded’ the thermistor to the heat spreader plate. Once the epoxy had cured, the face of the heat spreader plate was lapped perfectly flat.

Now I don’t use copper spacers any more; rather I ‘bond’ the cold plate directly to the entire PGA/BGA package, so I had to find copper spacers. In checking out all the different vendors, I found that the only difference from one spacer the to the other was the material supplier and alloys of the copper, but the conductivity of each alloy was of such insignificance that I just picked up one sample from cool-computers.com .

Now in order to cover all the different system configurations, I set up a test for both the Slot 1 package and the FC-PGA package using all three of my prior “Thermal Acceleration” projects. 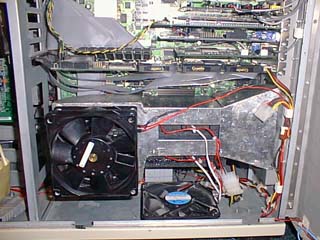 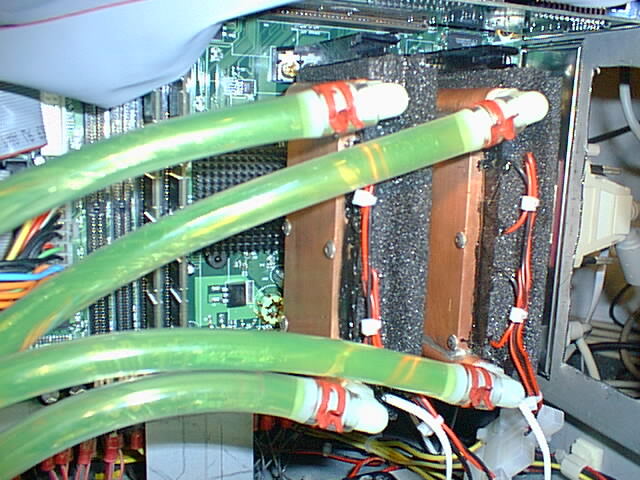 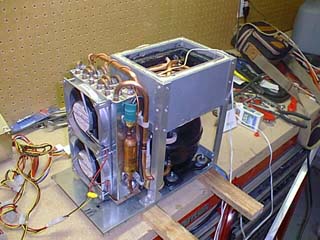 Each of these projects are all sub-ambient cooling solutions and should provide a substantial data base proving or disproving the effectiveness of a copper spacer. Each system will be tested on the Slot 1 package and the FC-PGA package, with and without the copper spacer.

The first test on the Slot 1 was with a modified Mark 80 heat sink from Computer Nerd USA using two Ice 71® peltiers from TE Distributing Inc. (80W each) and on the FC-PGA processor using a Alpha FC-PAL6035 from Computer Nerd USA and a CP1.4-127-LH1 peltier from Melcor (105W). Each system used 1/8″ copper cold plates. The tests were run under Windows NT4.0 running [email protected] for 2 hours to establish full load processor operating temperatures. Each 800E was set at 1.75V and accelerated to 1067Mhz.


The net gain at the core is 2.9C with the spacer.


The net loss at the core is 0.9C with the spacer.

Tests were run twice on the Pentium III FC-PGA because of the surprise results. After further evaluation of these results, I began to conclude that the Slot 1 package could be more effectively insulated from ambient temperatures and residual heat gain from components on the motherboard. The FC-PGA processors were actually pulling additional heat loads through the PGA package from the motherboard, adding heat load and reducing the cooling ability of the cooling system. But what if we increased the ability of the cooling system by providing more effective heat sinks? Next system please….

The second test on the Slot 1 was with my custom built copper exchangers using two Ice 71® peltiers from TE Distributing Inc. (80W each) and on the FC-PGA processor using a a-MAZE-ing Water Block from Danger Den and a CP1.4-127-LH1 from Melcor (105W). The Slot 1 system used 1/8″ copper cold plate and the FC-PGA used a 1/4″ cold plate. The tests were run under Windows NT4.0 running [email protected] for 2 hours to establish full load processor operating temperatures. Each 800E was set at 1.70V and accelerated to 1067Mhz.


The net loss at the core is 2.9C with the spacer.

Well the tests did not lie; the conjecture we arrived at from the first test was correct – the PGA package was now acting as a heat sink for the motherboard, adding heat load to the cooling system.

But this test had some variables that had not been accounted for. No insulation had been provided to the back of the motherboard and the CPU/Exchanger enclosure was not completely air tight and fully insulated.

I decided to re-run the FC-PGA test taking additional temperature readings at the back of the Motherboard (centered on the Socket 370) and 1/2 inch from the Socket 370, outside the insulation coverage. The enclosure was fully insulated to ‘Supercoolin’ specifications and a 3/8″ x 8″ x 8″ piece of closed cell foam was bonded to the back of the Motherboard.


The net loss at the core is 2.7C with the spacer.

The proof is in the pudd’n as they say. We were now cooling the Socket 370 and Motherboard by adding the copper spacer and increasing the load on the cooling system, thus reducing the effective CPU core cooling and raising temps.

Well now I’m pissed at Joe – his initial conclusions about the addition of the copper spacer to your cooling system might just be correct in the case of a FC-PGA processor package. This has overwhelming repercussions in as much as the Slot 1 and Slot A processors are not going to be around much longer.

One conclusion which can be soundly drawn is that those “dumb ol” engineers at Intel might just really know what they are doing. The reduction of the heat spreader plate on the FC-PGA/BGA package served the purpose of focusing the heat removal on the CPU core only, as the PGA/BGA package is a much better heat conductor that the old ceramic packages.

At this point any further testing would most likely yield the same evidence, but now there was a question that in really low temp cooling solutions, how much effect would the copper spacer have in reducing Motherboard temperatures to a point that condensation outside the air tight enclosure would become a problem. Since the only change from test 2 to test 3 would be the substitution of the radiator for my hand built phase change system and cpu core voltage set to 1.65V, we decided to finish the testing.


The net loss at the core is 6.6C with the spacer.

*NOTE: The closer the delta is to 0C, the more effective the cooling is at negative cooling temps.

This was the tell-all test for me – the use of the copper spacer on the Slot 1 package yielded no usable gains and in the case of the PGA package, it was a disaster. Not only was the effective cooling of the CPU core substantially reduced, the remarkable cooling of the back of the motherboard would surely result in major long term condensation problems.

Hopefully these test results will provide you with enough information about the effectiveness of the copper spacers being sold all over the internet, so that you can decide whether or not they will give you any cooling advantages. But I have learned that in my projects, the ‘bonding’ of the cold plate directly to the entire package will result in even poorer results on FC-PGA processors in ‘Supercoolin’ projects, so thanks Joe for shoot’n down all my great ideas of the past and as usual, great work on bringing the facts out for us “Overclockers”.

I have been trying some different things with lapping CPUs to see what makes lapping so effective. I had a hunch that exposing the copper underneath the nickel (I am guessing it’s nickel) cap of Intel’s CPUs is as important

SUMMARY: Mounting a heatsink on a Coppermine requires more care due to the possibility for misalignment resulting in poor cooling. Intel’s Coppermines hold incredible promise as a premier overclocking CPU. A large part can be attributed to the superior cooling