The CPU in this review IS NOT an engineering sample – I bought this chip from High Voltage Computers and it came in a sealed retail box. This is a Malaysian PIII 500E SL3R2, FPO# Q944A007, MM# 825584, Version # A01304-001, Pack Date 11/6/99. It comes with an Intel heatsink which I did not test yet; I used an Alpha Socket 7 on a Soltek slotket SL-02A+. This is their Coppermine slotket which takes PIII 500 and 550s – apparently there is another version in the wings which will take higher speed Coppermines. 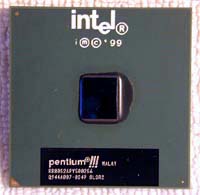 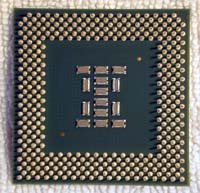 As you can see from the pictures, the chip itself is miniscule – it measure 3/8″ x 7/16″ and sticks up about 1 mm over the chip’s base. The back of the chip has a number of exposed components as well, probably capacitors. In practical terms, the size of the chip presents a real challenge when you mount a heatsink – it is very easy to mount a large sink (like the Alpha) in a way that it does not contact the CPU’s surface squarely. I took special care to make sure the Alpha was aligned evenly on the chip the second time I mounted it and noticed better cooling performance.

I think these chips may require better clips on heatsinks to ensure absolutely level mounting – I could not use my AquaStealth on this due to the lack of a secure mounting method. It was apparent from the CPU’s thermal diode temp that the AquaStealth must have been slightly off. I will have to make some kind of adjustable clip for this.

Mounting the 500E on the slotket with the Alpha (see pic below) required a slight modification – the handle of the ZIF socket is a metal one that made contact with the base of the Alpha. I carefully straightened it slightly such that the handle now rests below the Alpha’s base – very easy to do with a pliers but a necessary mod. 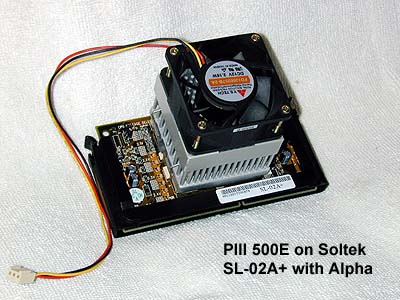 The test system was as follows:

The SOYO picked up the 500E at boot, adjusting the voltage to 1.6. I was not sure if it would so I adjusted the voltage on the Soltek to 1.6, but this is not necessary – leaving it on AUTO is fine. I tested the various FSBs using SOFT FSB – I booted at spec speed and voltage and then varied FSBs. At each step tested I used Prime 95 to stress the CPU to a stable temp. The reported temps are using Motherboard Monitor readouts and reported CPU speeds. I also used SiSandra 99 to benchmark MIPS and MFLOPS at each stage – all of this data is presented in the following table:

I pooped out at 155 MHz but I did not get a BSOD – Prime 95 failed but it was still running OK. Now looking at this table a number of things pop out:

I don’t know what alignment of planets made these speeds possible with this setup, but I can only tell you what I found and with what. This is a sample of one – as others buy the 500E and try it out, we’ll see if this is just a freak or not; I suspect it is not because the core is spec’d to hit 733 MHz, and I believe with the right board (whenever the 810s get bug free) and cooling I don’t doubt that 800 is achievable, and with super-cooling I’ll bet someone will break 1,000.

As I was testing the CPU, I was flabbergasted. I called my pal at PC Nut to see if I was hallucinating, and Humphrey verified that the Matrox G400 16 MB can in fact sustain very high AGP speeds and the SOYO is incredibly stable at all FSBs. I believe the 500E will not be around too long and if you are thinking of upgrading, this is way better than the PIII 450. I think Intel really did their homework on designing this CPU for heat dissipation and speed.

SUMMARY: Mounting a heatsink on a Coppermine requires more care due to the possibility for misalignment resulting in poor cooling. Intel’s Coppermines hold incredible promise as a premier overclocking CPU. A large part can be attributed to the superior cooling