So it is time again for an update to Core Temp: here I will go over the new additions to 0.99.7 and explain some of the fixes.  It is available for download immediately on the Core Temp homepage.

The other fixes are minor, and self explanatory. 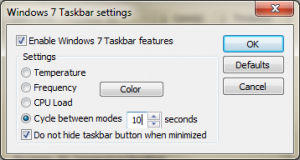 Core Temp will now, if enabled, place a progress bar in the taskbar button and a small icon showing the current mode (the small icon will only be displayed if your taskbar buttons are not set to “Small”) There are 3 modes and a 4th option is to rotate between these 3 modes at a user determined interval. The options are really straightforward:

There are also other minor bug fixes, as usual. I really hope to get your feedback on this release.

You can download the new version at the usual location, Core Temp’s home page.

I have also released a media center add-on to enable HTPC users to monitor their processor status from within Media Center, you can download it from the Add-ons page. 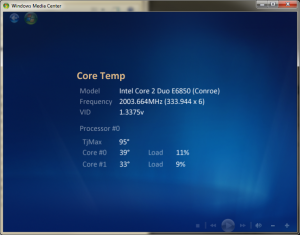