SUMMARY: A top performing kit at a reasonable price. 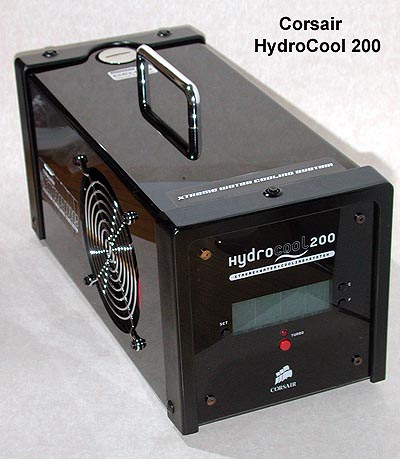 The good guys at Corsair Memory were nice enough to send a sample of their latest product, the Corsair HydroCool 200 to test out. This is a diversification by Corsair, noted for their memory products.

Of more significance is the fact that this product was developed by Delphi¹. This is a well established company that booked $27.4 Billion in automobile related sales last year. According to Corsair, Delphi Thermal Systems designed this unit. I believe Delphi Thermal Systems is part of the Safety, Thermal and Electrical Architecture division, which booked $9.7 Billion in sales during 2002.

I would not be surprised to see additonal “big guns” entering this market, either directly or through marketing alliances with some familiar names. The second message is even more clear:

My opinions, but sure looks like watercooling, once dominated by techies, is seeping down to the non-techie – big time. One of the great things about the Overclocking crowd is that we get a good view of what’s coming down the pike, usually by one to two years.

The HydroCool’s key features include:

The instruction manual is nicely done, comprehensive and easy to read. The retail price in the US is supposed to be about $215 – very competitive with other systems.

First I’m going to give you a detailed look at what’s inside, and then a performance test using the Die Simulator.

Shipping with the HydroCool 200 are the following parts: 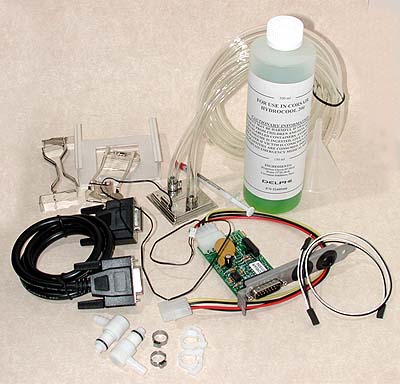 ¹ Delphi is part of the more widely known company of AC Delco, which is spinoff from General Motors – Thanks Steven and Tom!
{mospagebreak}

When I opened the shipping box, the HydroCool was wrapped in clinging plastic – I quickly found out it was clinging because it was wet. Somewhere in the HydroCool there was a leak. The system was not totally dry (probably tested before shipping) and I was concerned that the circuit board might short out if not thoroughly dry.

Normally I would test it first, then take it apart to look at the innards; this time, I took the cover off first to mop up water and make sure it was dry before firing it up. Removing the cover required that I remove some plastic fan studs holding the fan grills in place – once done, the cover came off easily after removing four screws. I’ll discuss what’s inside after taking a look at the key components.

The waterblock is not large: 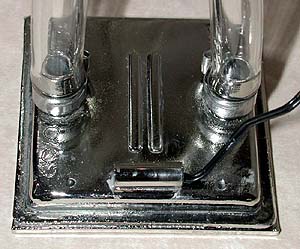 it measures 50mm/2″ square. This gave me some pause – waterblocks of this size usually are not strong performers. The base 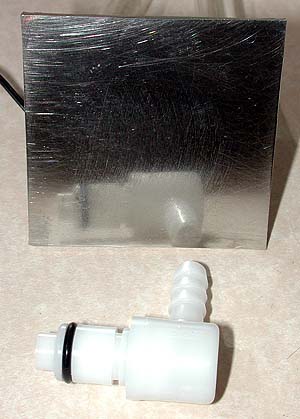 shows some polishing marks but I could not feel them, so they are minor. 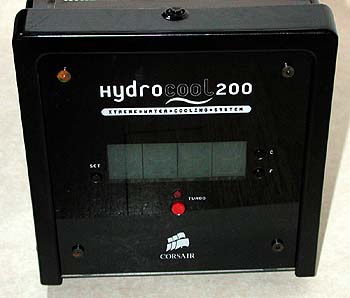 shows the LEDs and four control buttons – one to set, two for temp (C or F), and one for over-riding the fan to run it at full speed. The back shows 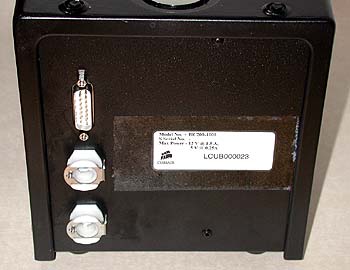 the two quick disconnect hose connections and the control cable port. This is used to power the external box and relay temp data for fan control.

With the cover removed, I found the leak: 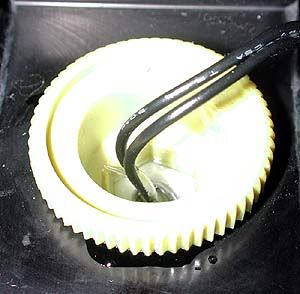 This is the cap which holds the low-water alarm in the reservoir. Even fully tightened, it still leaked slightly. The moral here is not to overfill the unit and don’t tip it. I can’t tell you this is a generic problem, but it’s something to watch.

With the cover off, you can see the fan 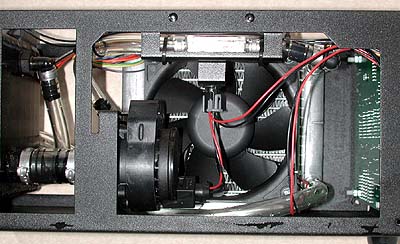 a 120mm x 37mm unit – pretty hefty. On the right is the PCB control panel and in front of the fan is the 12 volt water pump – there are no external power connections needed, it’s all powered by the PC’s power supply. The pump is nicely done – it’s mounted in a large rubber collar to isolate noise from the case.
{mospagebreak}

Looking down into the case

shows the reservoir on the left, the fan/radiator (5½” x 7″) at top, the pump in the lower middle, the flowmeter and front panel PCB at the extreme right. The flowmeter lights up when powered:

A side view shows the rad 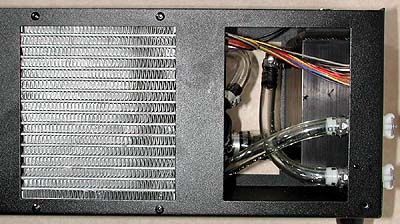 and the quick connect fittings at the rear. A look from the other side 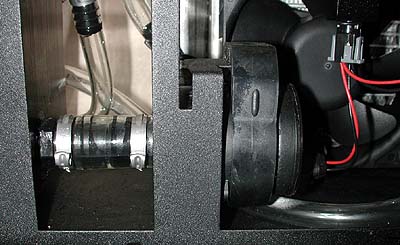 shows the pump – note that the fittings between the reservoir and pump are larger than the tubing size (1 3/8″ vs 3/8″ OD) – something I have not seen before. To the right of the center strut you can see the large rubber bushing which holds the pump in place – a nice move for sound isolation. 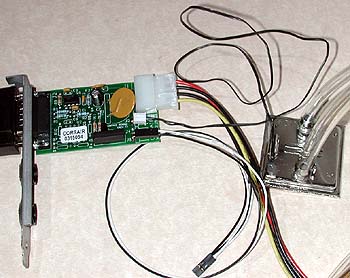 I really like this last feature – if for whatever reason water stops flowing and temps escalate, the controller shuts down the PC. Note that this is independent of the Operating System – it’s a hardware shutdown. Users can program the shutdown temp.

The controller fits in a PCI slot cover, but does not mount into a PCI connector – it’s free standing. What’s nice about that is if all your PCI slots are taken, you could remove the slot cover and mount it inside the PC, allowing room in the case for the tubing and interface cable. 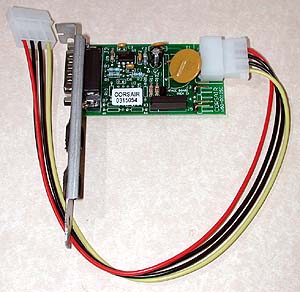 On powering the HydroCool, it beeps once, the fan runs first at full speed, then quickly slows down. I measured fan speed at 1471 rpm @ 26.0C waterblock temp and 2252 rpm @ 24.5C at the Turbo setting. At the low setting, I could not get a reading for system noise 3′ away with a Radio Shack sound meter – < 50 dBA. However, the noise you hear is not so much from the fan but the pump - sounds like a low humming noise.

At the Turbo setting, fan noise is louder – I measured it at 57 dBA three feet from the fan – not terrible, but definitely noticeable.

I tested the HydroCool kit using the Die Simulator with the Socket A clip. The clip is stiff, engages three socket lugs and you need a screwdriver to mount it on the socket lugs.

At its highest speed (Turbo), Die Simulator results place the HydroCool at the top of watercooling kits tested to date (Heatsink Ranking). At its low fan speed, results still place the HydroCool in the top rank. This is much better than I expected, considering the smallish waterblock.

Corsair’s collaboration with Delphi has produced a very good external watercooling solution. With retail pricing expected around $215, the HydroCool 200 looks like a very competitive kit for aggressive cooling with easy setup effort.

For a first time effort, Corsair/Delphi hit a homerun – not unexpected considering the resources that this team can bring to the party.

Thanks again to Corsair Memory for sending this our way.


Cheap Evaporative Cooler in a Bucket

I have been playing with evaporative coolers ever since Steve published his results HERE. So far, I have built 4 different models. I have been focusing on small, low-flow versions made with 2 litre pop bottles and 10 inch drop