“It gave me the impression that this ram was just getting started, as the rest of my system decided it had had enough.” (Pg. 3)

“Coupled with the fact that at DDR446, I was still running at the lowest available voltage, and fairly tight timings of 7-3-3-2.5. I feel I left a lot of this memory on the table,
unable to fully wring it out with this system.”
(Pg. 3)

“I feel certain they had more to give, but the balance of my system just wouldn’t carry them there.” (Pg. 3)

When I wrote these lines in my original review, I firmly believed these statements to be true. The system I originally tested them in seemed to run out of headroom long before the Corsair did, topping out at 222FSB.

At that setting (222FSB), the Corsair XMS PC3200LLPRO was still running at fairly tight timings in the BIOS, and I hadn’t even raised the voltage to them.

Between then, and now, I’ve been able to acquire a pair of components that will help me find the true ceiling of these sticks of DDR. But first;

A quick review – where I left off
The (original) Test System:
Benchmarks Used:

In testing these sticks of memory out, I used three commonly used benchmarking suites:

** Futuremark has discontinued support for PC Mark 2002. It is still available for download however, at Futuremark’s website.

All runs were done at a 1:1 ratio with the CPU (synchronously). All of the tests were run a minimum of three times through, frequently more. Basically, I ran
them until the numbers stopped going up, and either leveled off, or a run produced a lower result than the previous run did. All runs were also done with the memory installed
and running in Dual Channel mode

All in all, some pretty good numbers out of this system. But I knew I could get more out of this DDR. So, I went shopping (alright, not specifically to build a system
to complete this review, but with the thought in mind).

I’ve had a pair of Vantec AeroFlows on my AMD based dual CPU rig for a long time now, so when a P4 Aeroflow came my way (before I had a P4 system to use it on), I tucked it
away for the future. Excellent and very quiet air cooling. 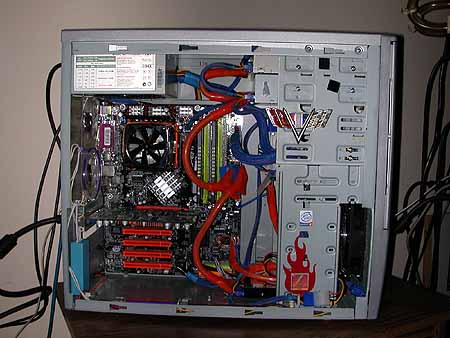 I went with the DFI board as it comes with a ton of toys included, and specs out very well in comparison to some of the other high end overclocking favorites available.
Plus, paired up with some UV lighting… 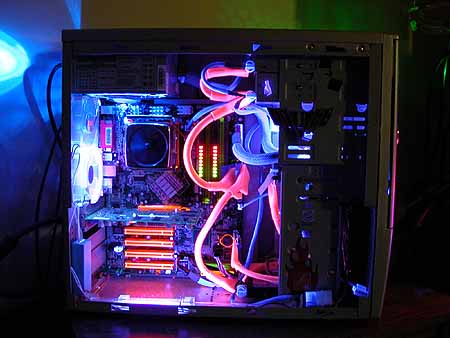 So, with a new Sheriff in town, I’m ready to have a go at this DDR400 again. I’m not going to walk through the FSB settings one by two as I did in the original article,
but rather just pick up where I left off, and end with the highest stable setting I could achieve.

A number of noteworthy things, before I proceed to the bench scores:

To quote Frank from “Everybody Loves Raymond”, HOLY CRAP! =O

The jump in scores over the previous tests are absolutely amazing. At the end of this article, I’ll put up the highest stable scores from each system for direct side
by side comparison.

After a lot of tweaking and futzing around in the BIOS trying to get things steady, and not lock up in the benchies, I finally arrived at these settings as the true ceiling for
these two sticks of DDR;

There’s some major settings changes below to get here. I *might* have gotten to this point with a lower CPU voltage, but I kept it as high as I did to ensure it wasn’t causing
instability.

At this point, any further increase in FSB, running at 1:1 (synchronously), would not boot into Windows, or finish the benchmarks (depending on how much further I went).
I do know, however, that the CPU or motherboard isn’t holding me back now, as if I run the memory at less than 1:1 with the FSB, I can post as high as 250FSB with this combo.

So where does that leave us?

Unless my math is off, this is approximately a 17% increase in speed over spec for this memory. Not too shabby indeed. I was able to get 11 FSB further with the P4 system
than I did with the AMD combo.

The differences in scores I got in these three benchmarks really piqued my interest the most however. I knew Intel based systems had an advantage in memory bandwidth, and are
able to utilize Dual Channel configurations more efficiently, but the disparity between the two flat out amazed me.

Let’s close this out with a look, side by side, at the highest stable settings I was able to get with each system:

When I originally tested this memory out, I knew when I finished there was more to be had from it. I was right. Using a system capable of higher FSB, I was able to coax a fair
amount more out of this product.

I was impressed with this product before, and I’m even more impressed now.

Once again, I’d like to thank Corsair for sending this memory kit out for us to evaluate.

There’s a sentiment among some financial types that what AMD is going to have to do is largely or entirely outsource its fabbing to third-parties. Outsourcing is a big buzzword these days, and it may work very well in other

The New York Times had an interview the other day with one of the execs of Rockstar, Hillary Clinton’s favorite video game company. 🙂 There’s a couple very interesting quotes from the article: “Games are going to take over from

After spending thousands of dollars on brand new hardware the dang computer won’t even boot. Before you breakout the sledgehammer or start panicking, read this guide to help you troubleshoot this common problem. The fans are spinning and everything looks as though its functioning correctly, but nothing comes up on the monitor.