Up for review today is Corsair’s XMS TWIN2X-2048 6400C3 DDR2 kit, which I received directly from Corsair.

With the launch of the XMS TWIN2X2048-6400C3, Corsair has released the first DDR2-800 memory modules featuring CL3 as a default specification. Current DDR2 users
will know this news is huge and those who haven’t made the switch to DDR2 yet
should pay attention to this memory, especially those who will be implenting an
AMD AM2 system or the upcoming Intel Conroe (Core2Duo).

Prior to the release of the 6400C3s, CL4 was the lowest latency available in the
DDR2-800 speed rating; in fact, CL4 was the lowest latency at most slower speeds
as well. Corsair has brought CL3 latency to the masses at PC2-6400 by carefully
screening, sorting and testing the memory chips used to produce the 6400C3s.
Since a majority of the high-performance memory has featured Micron D9-based
memory ICs, it was no surprise to learn the 6400C3 also use Micron chips.

Right off the bat, what the heck is EPP? The answer is: An extension to the SPD
(Serial Presence Detect) found on DIMMs.

SPD normally only contains data to set
memory parameters that conform to JEDEC standards. Since the JEDEC standard SPD
programming has to take into account the slowest and weakest memory, default SPD
sets the loosest parameters for the memory type/speed.

If you have ever installed
“4-4-4-12” memory to find it actually running at 5-5-5-15, you were a victim of
JEDEC standards. The only way to achieve manufacturer specifications is to
alter the memory parameters manually.

EPP allows memory manufacturers to add performance data, such as command rate and
voltage, that are specific to the memory in unused portions of the standard
SPD. Motherboards with a BIOS that supports EPP will then be able to automatically
adjust memory to parameters as defined by the manufacturer, not to a blanket
industry default that must cover the slowest memory in the class.

You say,
you can do that yourself in BIOS? Of course you can, and you have to in order
run non-EPP memory at the manufacturer’s specs if they are different from JEDEC. However, keep
in mind that there are tons of memory settings that cannot be altered easily (or at all)
by the end user. EPP handles those parameters as well in addition to making a substantial
amount of extra parameters available to end users for manual tweaking. If you are new to
memory clocking, EPP will do a fine job for you and if you are an experienced tweaker, EPP
will open some extra doors.

NOTE: Since the EPP data is included in addition to JEDEC standards, the
memory remains JEDEC compliant whether it is being used in an EPP motherboard or not.

Corsair developed EPP in conjunction with NVIDIA and as such, NVIDIA motherboards
will be the first to support it – but it was developed as an open standard and is
expected to be adopted by other motherboard partners and memory suppliers.

“Enhanced Performance Profiles are a significant change in the way
overlocking and performance hardware compatibility is defined and sold. Together
with NVIDIA, we have defined a new standard on how a performance memory SPD should
be written and communicate with the motherboard BIOS,” said John Beekley, VP of Applications
and Engineering at Corsair Memory. “Our expectation is that EPP will become an open
standard adopted by major motherboard companies, core-logic manufacturers, and other
memory companies.”

In order to isolate the memory for testing, a bus speed of
1066 FSB was chosen since the 266 FSB bootstrap makes all memory dividers available
in BIOS, allowing memory speeds to be altered using dividers without changing
any other system specifications that would affect results. As such, all changes in
memory performance are solely a result of using memory dividers to alter memory
speeds while keeping the FSB and CPU clock constant. 266 FSB gives the processor
a final clock of 3990 MHz.

Before starting anything, the board was set to the maxmimum stock DIMM voltage of
2.3 volts, which was measured on the board and set to exactly 2.300 volts to determine the
tightest timings and maximum speeds. Default for the memory is 2.2 volts and further
testing indicated that even as low as 2.1 volts was sufficient to stay error-free
at most of these results.

The following table represents speeds and latencies that PASSED two loops of
Memtest86 v3.2 without errors. Users that do any kind of distributed
computing require more stringent testing and results may vary. Regardless, the
results are extremely impressive for the voltage, particularly the maximum speeds
and latencies that pass the tests.

The above speeds and timings were used for testing since they did pass memory testing.
The default memory specifications of DDR2-800 3-4-3-9 were also included for reference. 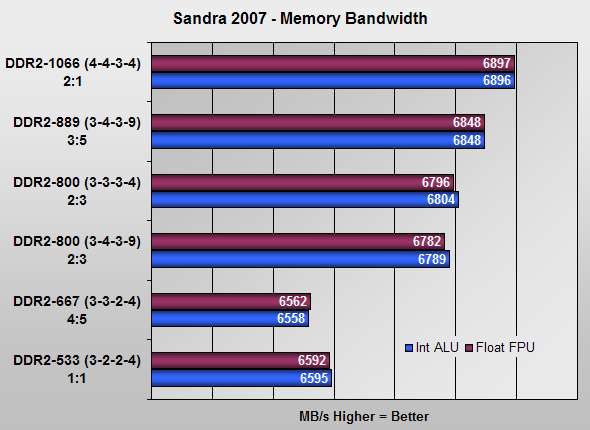 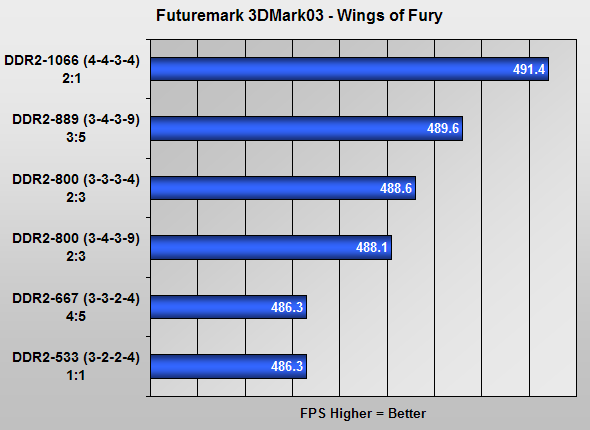 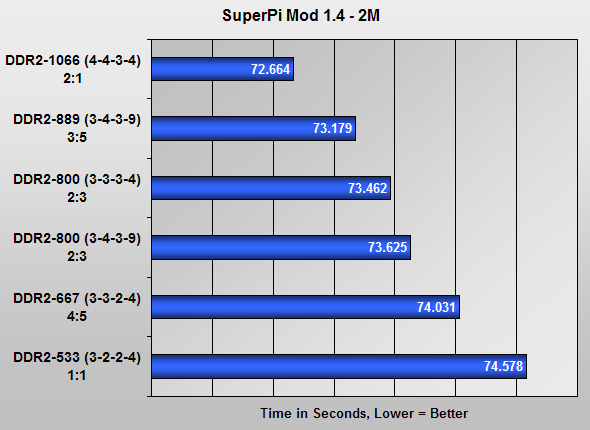 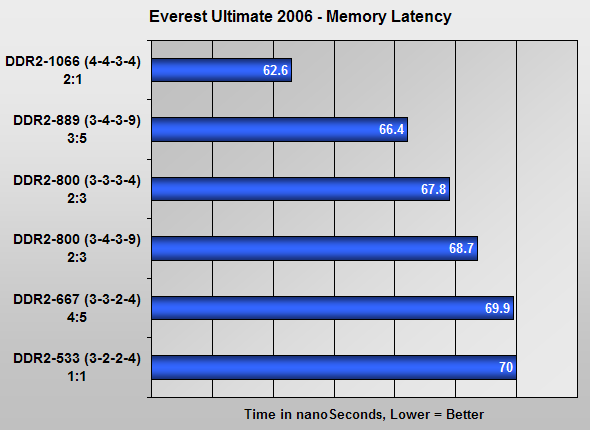 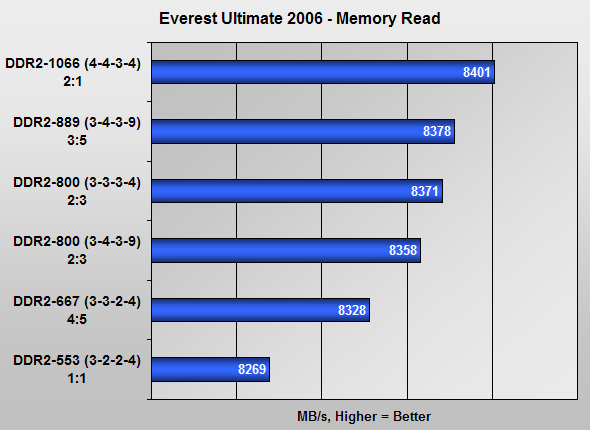 It is no secret that during the AM2 memory controller development, AMD worked
closely with Corsair on memory performance and optimizations. In fact, a statement
to that effect is made in Corsair’s official press release for the 6400C3s. It
definitely stands to reason that the release of the XMS 6400C3 is geared towards AM2
systems and, given these results, will be an excellent match for it.

Any system will
perform better with lower latency memory, but that goes double for AMDs with their
internal memory controller. With AM2’s support of DDR2-800 and these amazingly tight
timings at that speed, the 6400C3s should be a prime choice for AM2s. Add
in initial EPP support by NVIDIA-based motherboards with an SLI graphics setup and
what you get is something that goes together in a nice neat package and is sure to
perform extremely well.

Conroe, Core2Duo, Core, NGMA. Whatever you want to call it, it’s around the corner
and promises to be the biggest thing from Intel in a long, long time. With its default
1066 FSB and the 6400C3s easily achieving DDR2-1066 speeds with low latencies,
these should be more than an excellent match for Conroe systems.

For those willing
to try, preliminary Conroe overclocks indicate that bus speeds in excess of 400 FSB
are possible due the low CPU multiplier. 400 FSB running the 1:1 memory divider
(highest performing ratio) will yield DDR2-800, the 6400C3’s default speed. Combined
with the CL3 timings, the 1:1 ratio and 400 FSB or more to back it up, a Conroe system
capable of running it could easily be the highest performing memory system ever on an
Intel…and that will be a review I am looking forward to writing!

As mentioned before the start of the tests, the 6400C3s were able to overclock
to DDR2-900 at default timings and with DIMM voltage available on any motherboard.
At the same voltage and with excellent timings (4-4-3-4), DDR2-1080 was possible
and both of those overclocks passed Memtest86 v3.2 with flying colors.

Removing the limitation of maximum voltage allowed by BIOS via the Vddr mod and
throwing caution to the wind, things definitely look even better. Probably the
most exciting thing is the fact that
these 6400C3 sticks are the very first DDR2 modules to run CAS3 at DDR2-1000 speed
with a slight bump in voltage! Chalk up another first for Corsair!

Of course there’s much more room to play once you get outside the box and with these
sticks, a little bravery and a very little extra voltage (2.40 – 2.45 volts) can go a long way.
With an EPP-capable motherboard, these sticks are a memory overclocker’s dream!
I will leave you with these two thoughts…

Corsair XMS memory is widely known to be enthusiast-friendly, and 6400C3s deliver in
spades. I am simply amazed at what they do at default voltage to begin with. Toss in
some extra voltage and they delivered something that has never been done before. To
be performing like this with 2 GB capacity is simply amazing and much credit must be
given to Corsair to have the ability and desire to produce DDR2 this good!

With the recently released AM2 and upcoming Intel “Conroe” systems, the XMS 6400C3s
will be THE memory to have for the serious gamer/bencher/overclocker. The default
DDR2-800 speed makes it a perfect match for AM2 systems and the tight CL3 rating will
make AMD’s internal memory controller very happy. Likewise, with the ease at which
this memory reaches DDR2-1066 speeds with a tight CL4, it will rock-n-roll
on Conroe / Core2Duo with its 1066 FSB.

Which ever system you run it on, the XMS 6400C3 simply offers the best of everything,
whether you want speed or tight timings. The 6400C3s run incredible speeds
with the tightest timings ever for DDR2-800. Being able to reach PC2-8500 with CL4 at
default voltage is a huge bonus. In fact, CL4 at PC2 8000-8800 is tighter timing
than most modules sold at those speeds and these do it with ease in a 2GB package.

The conclusion is simple:

The 2 GB XMS 6400C3 kit offers timings that are tight or
tighter and speeds that are fast or faster.

Both factors are excellent and they make
the 6400C3s so flexible as to yield the strongest performance no matter what type of
system they are in or how they are being run.

Waiting to hear what the “con” is? I honestly can’t find one. I cannot even find
price as a strike since many lesser 2 GB kits are priced the same or higher while
yielding much lower results. The XMS 6400C3s are worth every penny if you simply
must have the very best, tightest-timed DDR2, and that’s all there is to it!

Thanks again to Corsair for sending this my way to test out – a real pleasure!

G.Skill continues to put up some impressive high frequency results and is also giving away a bunch of hardware in conjunction with MSI, GX Gaming and Lian Li.