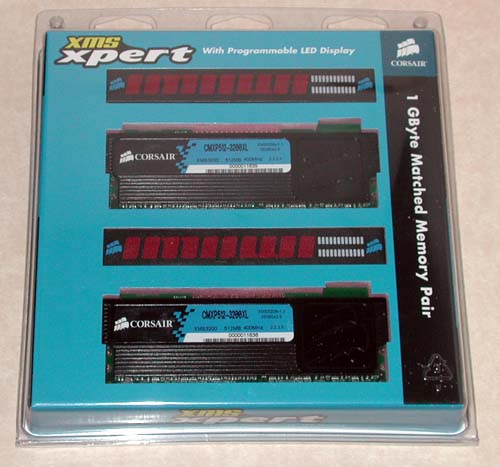 The good guys at Corsair Memory were nice enough to send a sample of their XMS xpert TWINXP1024-3200XL to test. Now this is pretty nifty stuff – an LED display attaches to the DIMMs to read out frequency, temperature and voltage; in addition, you can program it to display a scrolling message – the mind boggles at the thought. Finally, something new under the sun!

The Memory Dashboard is a nice feature: 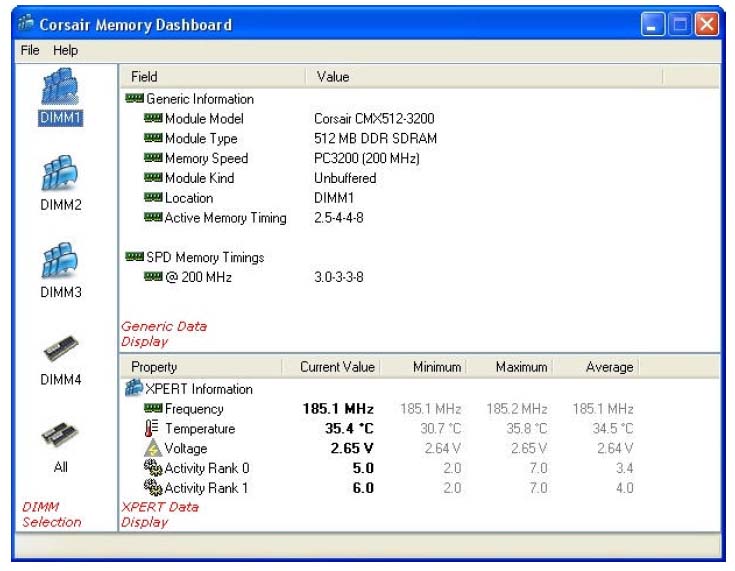 You can track key variables, among other options – for more details on this see the
Memory Dashboard Manual.

Normally with RAM, I take a “beauty shot” and that’s it – one stick is pretty much looks the same as any other. In this case, however, Corsair’s XMS xpert warrants a few pics. First, they are a matched set of DIMMs and LED modules: 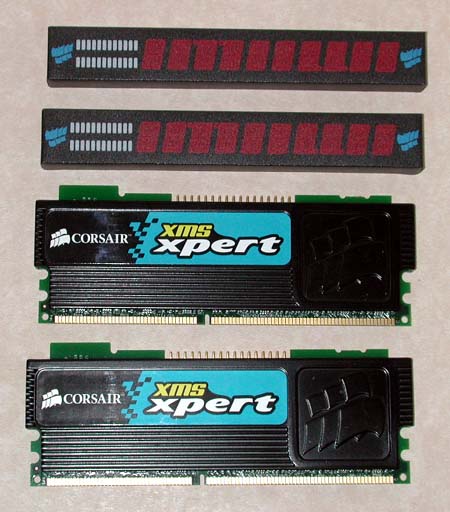 You mate the LED to the DIMM – it’s keyed so you can only snap them together one way:

The green tab mates to a slot in the LED module. 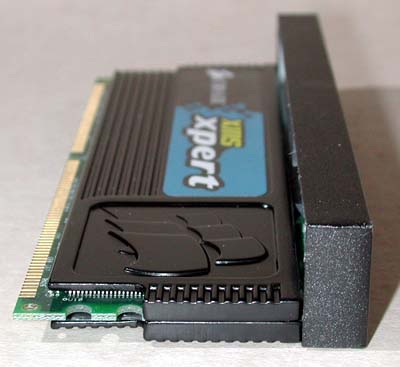 The directions suggest that you mount the DIMM first and then snap on the LED module after; you can mount the LEDs such that two adjacent DIMMs will fit no problem. Fire them up and…

There is also scrolling text that I could not capture with a camera (the digits changed too rapidly for the camera) – note that this text can be changed by the user.
{mospagebreak}

I used the UXD RST Pro2 Memory Tester. RST Pro2 is a stand-alone PCI card that only requires RAM, CPU and video on the motherboard – it is OS independent, self booting and runs 30 different memory tests to determine the point of failure. 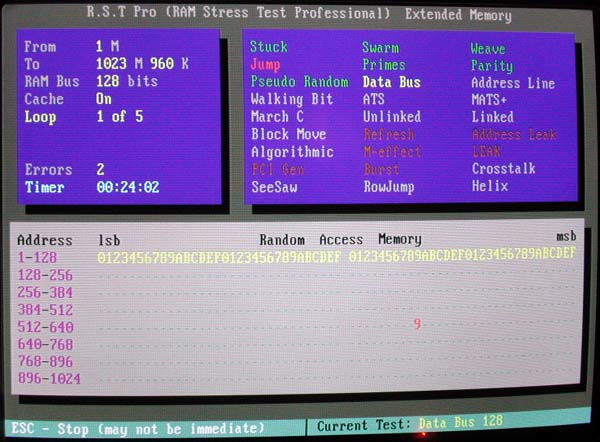 In running this test, I used an ABIT NF7-S motherboard, detuning the CPU so that it would not be a factor in testing. The only items populating the motherboard were the RAM, CPU, videocard, floppy and RST Pro PCI card – not much of anything to get in the way. I ran two sticks of 512 simultaneously to test how well they interacted.

Each test loop takes about two hours; if a failure was detected, I stopped the test and ran another series until it passed 5 test loops – about 10 hours for each “Pass”. I ran these tests at voltages ranging from 2.6 to 2.8v.

At Corsair’s spec memory settings (5222), I found it stable up to 437 MHz at 2.7 volts – 9.3% over the spec 400 MHz; increasing voltage to 2.8 volts had no beneficial impact – it would post above that but with increasing errors as speeds went up. It’s possible that some may be able to post and run benchmarks with minor or no apparent errors at speeds above what I found. I suspect going over 2.8v might add a couple of MHz, but IMHO not worth it.

Relaxing timings to 7 3 3 3.0 bumped the speed to 446 MHz – a 11.5% increase – not as much a gain as I expected; relaxed timings such as this will negatively impact on-screen performance, and considering the minimal gain, not worth it.

Corsair’s XMS xpert does the job nicely at spec memory settings (5 2 2 2.0) at 2.7 volts and can be pushed a little further with detuned memory settings. The LED module and monitoring software make this a very nice package – I can only imagine what messages users might program into the scrolling display.

Thanks again to Corsair Memory for sending this our way to test out and to the good guys at Ultra-X for updating me to RST Pro2.

We recently published the ADATA XPG DDR3-2800 memory review which consisted of a memory kit based on single-sided Hynix MFR IC. Even though memory clock is high and modules are overclocking really good, overall performance on those modules is lower than expected. Today I wish to present ADATA XPG DDR3-2600 also based on Hynix MFR IC, but it’s double sided and gives us 16 GB total. Read More