As I do more heatsink testing, I am monitoring not only CPU temps but the CPU’s back and side temp core temps as well. One heat source on all motherboards are the power transistors, and I put a fan over the six of them that the ABIT KT7 features. They don’t run particularly hot (around 35C/95F) but I placed a 60 x 15 mm fan over them to see what would happen. 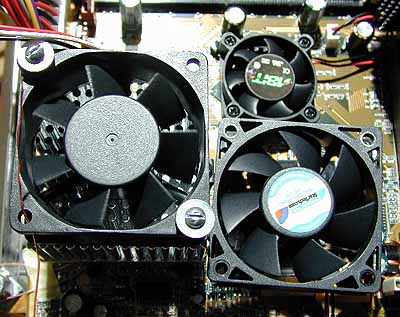 As the pic above shows, I just laid the fan over the capacitors around the power transistors and let it run. To my surprise, rear CPU temps start to fall (running Prime95, Duron 800 @ 1000, 1.93 volts)! As the table below shows, temps across the board were lower:

I placed a probe on the back of the board, underneath the socket, and recorded a temp of 37.2C/99.0F.

Hey – this is getting interesting! So I then decide to lift the motherboard up and get some air to the back of the board in addition to the top, as shown below: 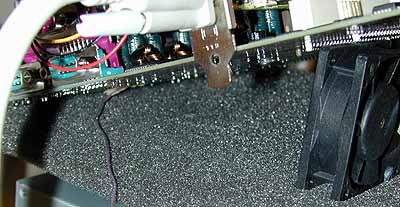 The point of all this is that you might be surprised what a little extra air flow in the right places can do for you. Feel around your motherboard (carefully) and if you detect some hotspots, a fan directed at it might yield some unexpected dividends. These are “free” temp reductions just waiting to be found.

I hate listening to Intel conference calls, but it’s not Intel’s fault.

CeleMine performance is not up to what many of us expected – I think we were expecting another C300a equals PII450 again. There is no doubt that the castration of the CeleMine’s cache has taken its toll on performance. In

What You Need to Know About

AMD Ramping Intel will prance around with their 1.5Ghz Willys, then not make any. AMD will crank out real chips in the next few months. By early next year, the low-end processor may be 1Ghz, about the same as Intel’s