Most current AMD processors comes factory unlocked, so most people with good overclocking mobos don’t need to mess anymore with CPU bridges. But the problem still exists for a lot of people that have cheap motherboards and want to squeeze juice from that little silicon piece.

While CPU unlocking guides have plagued the web for a long time, most of them require several slow steps, using special paints or materials not commonly available everywhere. That’s why I developed a technique that at first sounds difficult and risky, but with a little practice proved to be very easy and fast: Soldering bridges back. 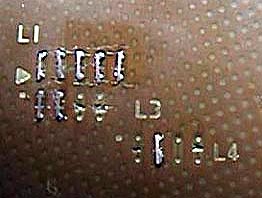 Since we are talking about cheap parts, high FSB’s are discarded, as the mobo and memory are not going to help too much. In my case I have an ASUS A7S333, 256MB DDR2100 and a 1700+ Tbred B. That leaves the possibility of playing with multipliers, but the mobo allows only a low range of multiples up to 12.5. As I knew that my CPU could do more than that, it was needed to modify L3 bridges to change default multiplier to at least 13, to enable the higher range.

I have made this treatment to several types of CPU’s, from Durons to Palominos and Tbreds, but my last upgrade had a new added complexity. This new CPU had the bridges end pads insulated, making it impossible to solder. 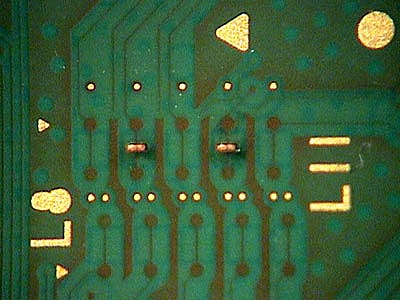 All latest AMD processors comes with this new packaging that seems to be designed to make things difficult for CPU tweakers. I decided that AMD is not going to win this fight and started to search for a workaround. 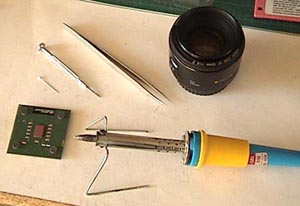 1700+ CPU’s have the advantage that all the speed setting bridges come closed, so with a sharp craft knife, we can cut any combination of bridges to get the desired multiplier. In this case, I wanted to get 13, and that means cutting the third and fifth L3 bridges. To be sure that the bridge is open, I made two cuts in a V to take out a small section of the conductive trace:

The bridges are very small, so a magnifying glass is a must, and that makes it tricky to manipulate the magnifier, CPU and knife in a steady enough position to do the job with just two hands. The ideal would be a self supporting magnifier, but an easier way is to fix the CPU to the table with some adhesive tape, and then hold the magnifier with one hand and the knife in the other, with the wrist resting on the table to get a steady hand.

The result of this quick face lift is an instant XP 2100+. It’s going to be automatically recognized by any motherboard as his bigger brother. All the Tbred B’s that I have tried can work at this speed at default voltage without problems. 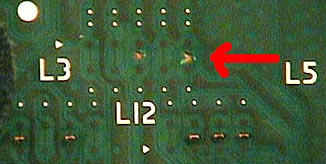 L3 bridges hand cut are very difficult to differentiate from laser cut ones with the bare eyes.

Now that 13 and higher multiples were available, I quickly realized that this CPU didn’t want to go much higher without feeding him with a proper voltage. Here comes the hard step – soldering L11 bridges back. In this case, that required uncovering the copper surface at the end of the bridge without damaging the nearby traces.

This proved to be very difficult task that required more magnification than what I was using, and ideally both hands available. Then I remembered that I had a close up lens for my camcorder that could be useful. I setup the camera in a tripod at a close distance from the work piece and looked at the image on the screen.

The close up was excellent and very detailed, but it was difficult to become used to working without looking to the same spot where I had my hands. When I was going to give up on the use of the camera, a great idea crossed my mind: I could make a video of my unlocking technique to help others do the same!

Uncovering the solder pads was the most difficult task of the entire job, so I didn’t care too much about taking pictures of the process as I had already enough complication trying to do it right without damaging the patient. Ideally this step can be avoided if you stay away from this type of CPU packaging and buy one with the bridges exposed. 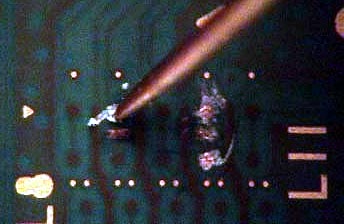 I started scraping the surface with a small pin, but in the end the best results were with a small precision screwdriver with the blade sharpened with a light wet sanding.
{mospagebreak}

When the CPU is ready for soldering, the first step is to thoroughly clean the surface with alcohol, because any grease layer in the surface can make very difficult for the solder to stick on the metal. Then the surface is prepared by applying a coat of flux.

The soldering starts by pre-tinning the contacts with a good drop of solder. No matter how sharp the tip of your iron, it’s going to be a lot bigger than the area to solder. This part is more like a blind game, where you slide the tip over the surface and the solder sticks to any exposed metal it can find. When all the pads have been pre-tinned, it may be necessary to inspect each one to be sure that there’s a good amount of solder forming a round drop on the surface. 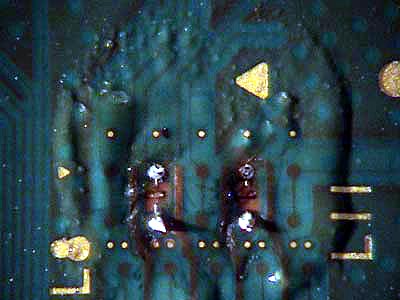 Here can be seen that in the first try the top right pad is somewhat flat and needed a second attempt.

To make the conductive bridge, we need to use a very thin wire. The easiest source for one is another electrical cable made of several thin ones. I used a short piece from an old fan cable, from which I separated one thin wire. This wire also needs to be pre-tinned, following the same process as above: Clean the surface, apply flux and then slide the hot iron tip over the wire. This time it just needs to have a light solder layer. 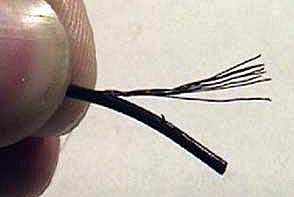 If the above steps are well done, the rest of the job is very fast and easy.

The pre-tinned wire is cut to short lengths and laid over the bridge position. Some flux on the surface helps to hold it in place wile positioning, and small pieces of adhesive tape complete the job of keeping it steady. Some fine post positioning can be made by pushing the wire to the sides with the tweezers to make sure that it passes right over the solder pads. 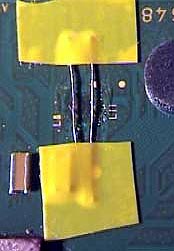 Now the final critical step is needed; with a light hand, we need to touch over the wire with the hot tip to melt the solder and join the bridge. The amount of metal that needs to be melted is so small that just a quick touchdown is enough. 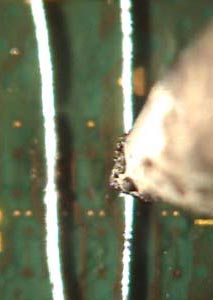 If everything goes OK, now you can remove the tape and the wires will stay in place. The last thing needed is to trim away the leftovers. Here we use again the sharp blade to cut the wires just outside of the bridge ends. 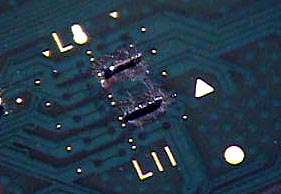 Now the CPU is ready for some action. I quickly installed it on the mobo, attached the waterblock in place and entered the BIOS setup to the hardware monitor screen. Vcore was showing a nice 1.85V, a good energy boost from the previous 1.6V default.

Then I started rising the multiples until the highest stable one was found, which in this case was a disappointing 15, giving 2000 MHz at 133 FSB. Some little more juice drops can be squeezed out of it with the FSB, reaching 141 for 2115 MHz CPU Burn stable. Not very much for what Tbred b’s used to give, but is still a nice extra from the original 1466.

If someone wants to try this, I recommend to practice on a dead CPU, but it is not difficult to succeed if you follow all the steps carefully. With a little practice, this can be a really fast job.

I made a video with the bridge soldering process for your enjoyment. It’s a 3.6 MB Divx5.1 file (Codec can be downloaded HERE.)

One last thing: Did I need to say that you are voiding your warranty if you try this? 😉

How AMD and Intel are doing. — Ed