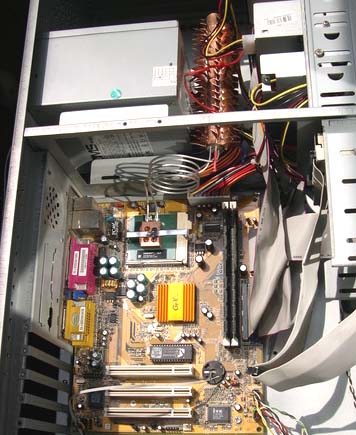 In December 2001 I built a CPU water cooler to eliminate fan noise. After some initial leaks, it worked great until now – almost 5 years later, it leaked again. I could have fixed the leak but in the meantime I had invented a vapor cooling (AKA heat pipe) and decided to build it.

The principle is simple:

At 20°C room temperature, the CPU temperature varies between 34-47°C depending on CPU load. This is an Intel Celeron at 733 MHz. 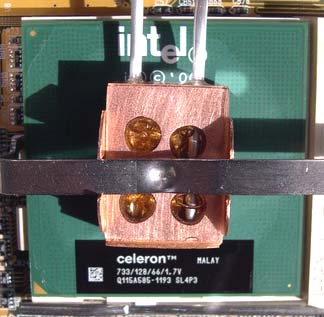 For a movie of the liquid boiling, go HERE (10 MB).
{mospagebreak}

Since the condenser is rather big, it can not be attached to the CPU directly. It also needs to be linked to the copper block flexibly, or little motion would lever the copper block off the CPU which would seriously interrupt heat transfer off the CPU. The system must not leak ether out or air in. These requirements led to thin (2 mm outer diameter) aluminium pipes.

A key factor is to make sure condensed liquid gets back to the copper block. I thought of leading the return pipe from the bottom into the copper block with a ball preventing vapor pushing liquid in the wrong direction. A constriction was another idea. Finally I just made the return pipe long, which caused higher flow resistance and dipped it near the bottom in the ether.

When the ether starts to boil in the copper block, it pushes liquid ether in both pipes up in the condenser. Since the long return pipe has more resistance and would require all the liquid in the copper bock to be pushed through, the vapor first clears the short vapor pipe and now only filled with vapor, it has even less resistance. Consequently the vapor keeps rising through the short vapor pipe while liquid ether flows down through the long return pipe.

My motherboard only has a temperature sensor under the CPU which picks up its temperature only slowly, but also from feeling the copper block, the dry phase seems to be no problem. In fact, the flash boiling is a good thing – it clears the vapor pipe quite effectively. If the liquid only boiled continuously, the liquid in the upper end of the vapor pipe might rise so that its hydrostatic pressure might cause the liquid to completely drain through the return pipe and the dry copper block could no longer cool the CPU.

Flash boiling is also the only time I can hear the vapor cooling – slightly. It takes about one minute from power on to the beginning of the boiling.

Before installing the cooling in the computer, I immersed the copper block in hot water. With too hot water, too much vapor is produced which can not escape through the vapor pipe enough so it pushes liquid through the return pipe. For hotter processors, a wider vapor pipe may be needed.{mospagebreak}

The condenser is a copper pipe with 4 U shaped copper sheets soldered to it. The sheets are cut to fins and twisted. The ends are sealed with glued aluminium cylinders. The cylinders were cast into copper pipe bits.

I broke two 2 mm drill bits while drilling the copper block. I could get the first out but not the second. I had to start another copper block – after buying a stand for the drilling machine. My drilling stand is a rather cheap one, so some holes on the second copper block drifted closer to the edge than I wanted.

To mount the pipes to the condenser, they are glued into holes in an aluminium cylinder, which is then glued into the condenser. But the aluminium cylinder slipped on the pipes while I was heating it to cure the epoxy (which gets quite liquid when heated at first). After cooling, the epoxy was too viscous to realign the cylinder, so I heated it again and with some twisting, I managed to align the cylinder. But it turned out while twisting and aligning, the epoxy had set and crumbled and the parts were not joined. When I tried to pull off the cylinder, the short vapor line broke.

I bought a new aluminium pipe and decided to make a third copper block. This time I glued everything. The epoxy I used is heat cured at 180°C for 5 minutes for maximum strength. The looking holes and glass window proved not only to be nice to watch but rather necessary to align the pipes and see when the epoxy had entered enough into the holes.

The CPU side of the copper block was ground dry with 120 and wet with 1000 and 1500 sandpaper and polished with metal polish paste. The result was a very pleasing copper mirror.

The third short pipe in the condenser with the red sleeve is used to fill the system with ether and drain air out. Two ml of ether fills most of the copper block, so I filled in eight ml ether in total with a syringe.

A plastic straw was heated and pulled so it would constrict and match the pipe. The end was held near a candle flame until it melted and then squeezed with glossy cardboard to seal one end. A thin glass capillary was drawn and used to suck air out of the straw while dripping in epoxy.

The boiling point of ether is 35°C (at 1 atm), so I used a hot air gun carefully to boil it and drive the air out. I lit the gas jet and after a while, when the flame was lower, I blew it out and pushed the plastic straw onto the pipe. Unfortunately the straw was too wide and when the ether in the system cooled, it sucked in the epoxy. Panic!

If the epoxy cured inside in the wrong place, I would need to redo much of the work. I quickly experimented to find which solvents I could use to get the uncured epoxy out – I used a mixture of acetone (or was it ether?) and isopropanol. The next time I made a better matching straw and used quick curing epoxy, as I could not heat the straw very much.

Simple heat transfer paste (probably silicon oil with TiO2 or such) is applied between the CPU and copper block after cleaning both with petroleum ether. {mospagebreak}

A More Detailed Description of the Principle

Some physical background: Evaporating a liquid requires heat energy. You can feel this when you lick a finger – it will cool down as the water evaporates. To condense the vapor, the same “heat of evaporation” must be taken away, eg by some cooler object.

A liquid in an evacuated container will release vapor up to the “vapor pressure”, which depends on the temperature of the system. If heated, more liquid will evaporate and the pressure will rise and, if cooled, some vapor will condense.

A liquid heated in an open container will start boiling when the vapor pressure overcomes the air pressure and bubbles are formed. The temperature of the liquid will rise no longer because every bit of the liquid that reaches boiling temperature will evaporate instead. The vapor also is at the boiling point temperature.

A liquid under lower pressure will boil sooner. If the pressure happens to be the vapor pressure of the liquid, it is in a kind of permanent boiling state. Even slight heating will cause it to boil. This is the case if only vapor of the liquid is above the liquid.

The vapor cooling system is a hollow copper block strapped to the CPU, a condenser with cooling fins, both connected by 2 aluminium pipes with only some liquid and gaseous ethyl ether inside – no air. The ether in the copper block is evaporated by the heat of the CPU. It also heats up a little, because the additional vapor causes the pressure to rise.

I’m not sure what’s going on in the condenser now, but the increased pressure will increase the temperature of the vapor, which will pass on its heat via the walls and the cooling fins to the surrounding air and condense. The condensed ether flows back to the copper block and the cycle is complete. The temperature will rise until the air removes as much heat from the condenser as the CPU puts in the copper block.

Had there been air in the system, the increased pressure would increase the boiling point and clog the path to the condenser walls.

Am I The Only One?

I just read a press release/article on the new Tagan 1100 watt PSU, found HERE. A couple of things suddenly began to sink in for me. Well, I should say it’s more like the “Sink” (as in heavy kitchen sink)