First, I should issue the obligatory caution: taking apart your
processor shell naturally voids the warranty and is a somewhat risky
business. You’ll always leave telltale signs that it’s been opened, and
a small slip of the screwdriver or an errant pull of the pliers can
easily destroy what Intel has so carefully put together. On my first
effort, I unintentionally and permanently disabled my cache by pinching
a wire trace with a screwdriver. Luckily, the processor was an old demo
unit I use in teaching computer classes, so it wasn’t a great loss.
Other de-casings have been completely successful, so if you still want
to pull the case off that treasured SL2W8 or SL2TV to see what kind of
cache it has, I’ll tell you how to do it.

We’re going to separate the plastic shell from the metal backplate, thus
exposing the processor circuit board. The metal backplate on a Pentium
II is actually a heatsink. On the plate are eight silver pins. The four
pins close to the edges pass through the CPU board and into the black
plastic shell. These pins are snapped into the plastic shell and are
fairly easy to dislodge. I’ve heard of people heating up the ends of the
metal pins with a soldering iron to make the plastic more malleable, but
heating up the pins didn’t seem to help at all. Instead, get a small
screwdriver and sharpen the end a little so it will fit more easily
between the metal backplate and the plastic shell. Then carefully wedge
the screwdriver tip between the shell and the metal plate close to the
outer pins and twist. Hopefully the shell will pop loose from the pin
and you can move to the other pin. Twist again. Hold your breath. Don’t
push the screwdriver in more than about 1/8 of an inch or you might hit
the circuit board. It actually sounds more difficult than it is. Twist
the shell off the other pins, too, and you now have the backplate and
processor board free from the plastic shell. Congratulations! But don’t
get too excited because that’s the easy part.

Now we have to separate the circuit board from the backplate. You can’t
even see the processor yet, since it is on the other side of the circuit
board. You will notice two metal clips holding firmly onto the four
inner pins on the backplate. We’ve got to get those two clips off. Very
carefully pry up one or more of the metal fingers that hold the clips
on. This is where you really want to be careful. A slip here can ruin
everything. When you get the clips off, you’re almost home. The circuit
board will simply slide off the pins. You’ll notice thermal compound on
the processor. That’s for heat transfer. You can now also see what sort
of cache you have. Let’s hope it doesn’t say -55 on the chip. If it
does, then you’ve got 5.5 ns cache: an overclocker’s nightmare. You want
5 ns or lower.

You shouldn’t have any trouble reversing the procedure. Putting the
processor back together is simple. The circuit board slips back over the
pins and the clips should snap right into place. You may have to bend
the fingers back slightly, but it’s easy. The pins snap easily back into
the plastic shell, too. If you want to keep the cache really cool, you
can even leave the shell off and attach a huge heatsink to the
backplate. The resulting processor looks more like a Celeron, but it
stays cooler than Intel’s design since you can blow air directly on the
cache. If you decide to strip your Pentium II, good luck. Please
remember my warnings, though, and handle the clip removal very
carefully. You don’t want to kill your processor. 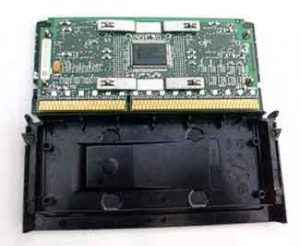 With fairly cheap low-speed Northwoods, it’s pretty much even at the moment.– Ed

With the release of P55 and Lynnfield, it begged the question of how they stack up to X58 and Bloomfield. Are socket 1156 Core i7s worthy of being called Core i7?