With prices falling, SSDs are rapidly becoming mainstream and are included in a vast number of new builds. The Crucial RealSSD M4 series of SSDs are the newest drives from Crucial, available in 64 GB, 128 GB, 256 GB and 512 GB models. Crucial have kindly supplied a 256 GB unit for review, along with a data transfer kit.

The drive itself came in an anti-static packet, as would be expected, and was accompanied by the data transfer cable and disc. Two quick install guides were also included – one for installing the SSD itself, and one for the data transfer kit. This product is currently priced (in the UK) at approximately £300 (without data transfer kit), making it around £50 cheaper than the OCZ Vertex 3 that we have reviewed previously. Across the pond prices come in at approximately $370 for the M4, versus $440 for the Vertex 3. This places the M4 towards the lower end of the price range for SATA 3 SSDs.

Crucial claims, however, that this drive is capable of some serious performance. Read speeds of 500 MB/s and write speeds of 260 MB/s are claimed, along with random 4k read speeds of 50K IOPS and a MTBF (mean time between failure) of 1.2 million hours. This is all topped off with a 3 year warranty, which seems to be about the standard length for this technology. Naturally, this warranty becomes far shorter – zero, in fact – if you open it up to have a look at the innards, so we have an image here for you.

The memory chips are, rather unsurprisingly, Micron branded. It can be seen from the photograph that the controller is a Marvell 9174 chip, unlike the slew of Sandforce-based units on the market.

While I’m always keen on a clean Windows reinstall, I gave the included data transfer kit a go. There are instructions (on paper) provided, but the video guide from Crucial is more informative and easier to follow, not that it’s a particularly complex procedure. The process was painless; I plugged the SSD into the suplied USB gizmo before booting from the CD. Copying across the (admittedly not very full) Windows 7 install was quite quick and worked perfectly. This may well save some people a considerable amount of time, but for the rest of the tests here I used a clean Windows 7  installation. The data transfer kit is likely more useful for people who would rather not spend the time reinstalling Windows, or for people who would like to upgrade to an SSD in the most straightforward way possible.

The following hardware was used to test the  SSD; all benchmarks were run at least twice, and scores are reported as the average of the runs.

Without any tweaking, the SSD made a major difference to the PCMark7 score right off the bat, raising it from 2147 to 3434. This is not surprising, compared to an older hard drive, but the difference it made to the overall score for the system surprised me quite a bit. Running other benchmarks on the SSD revealed excellent read and write speeds, often in excess of 400 MB/s for reads and 260 MB/s for writes. However, a further improvement is obtained by switching to AHCI mode in the BIOS. If transferring an older Windows install across, attempting to switch from IDE to AHCI causes Windows to flat out refuse to boot, while a clean install works fine. Re-running PCMark7 after reinstalling Windows 7 under AHCI mode increased the score slightly to 3506.
A series of other benchmarks were run to ascertain the performance of the M4 (which all showed best performance in AHCI mode). ATTO and AS SSD are useful ‘click and go’ benchmarks. ATTO shows read speeds of up to 550 MB/s and write speeds of up to 275 MB/s. AS-SSD records slightly lower, yet similar, speeds and gives the drive scores of 251/300/676, versus 260/345/734 for the Sandforce SF2281-based OCZ Vertex 3. While the Crucial drive can keep up in terms of read speeds, the access times are typically 1.5 – 2x that of the OCZ drive, and it falls behind in terms of write speeds.
CrystalDiskMark throws up similar numbers, with up to 500 MB/s reads and 270 MB/s writes; write speeds approach the Vertex 3 when random data is used as opposed to 0Fill and 1Fill, perhaps due to the data compression that renders Sandforce controllers among the fastest on the market today. 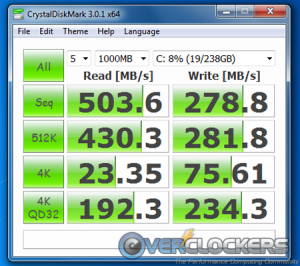 Finally, some comparisons between the OCZ Vertex 3 and the Crucial M4, presented in graph form. These essentially summarise what has been said above; the M4 keeps up with the Vertex 3 in read speeds, but loses out when it comes to writes. This is most likely a consequence of the controller. Notably, the M4 shows often much better read speeds for the smaller transfer sizes.

While the M4 doesn’t compete with the OCZ Vertex 3 in terms of write speed, its read performance is on par. Given the reliability issues that some drives built around Sandforce controllers are experiencing, the M4 looks like a more robust alternative that still delivers excellent performance. It lives up to, and in some cases exceeds, the claimed read and write speeds. In addition, the quite attractive pricing in the US makes this one to consider carefully when SSD-shopping. While other sizes are also available, remember that performance is not necessarily the same, and would be expected to be slightly lower for the smaller drives.
For these reasons, I’m happy to label this as  ‘Overclockers Approved’.
About David 21 Articles
I am an Overclockers.com Editor and OCForums Super Moderator. I help prepare articles for publication, as well as writing the odd article, news piece or review myself. I'm very keen on maintaining a high quality of writing in the articles on Overclockers.com, and emulating the objectivity and clear writing style of scientific journals. If you're writing for Overclockers.com and need some help with preparing your piece, or presenting data, please feel free to email me. I'm a chemist by trade, having completed a degree at the University of Edinburgh, Scotland in 2008. I'm currently studying towards a PhD at the University of Strathclyde (Glasgow, Scotland) in Physical Organic Chemistry on the topic of substrate structure/activity relationships in ruthenium-alkylidene catalysed olefin ring-closing metathesis. In my spare time I like to relax with a book or browse the forums.
Website

There is a lot of discussion on forums about the impact of available disk space on SSD performance. A pertinent question was raised; At what point does drive utilization impact SSD performance? Running some quick tests, the results proved rather insightful. Read More

By now, you have heard all about Solid State Drives: They are one of the most beneficial upgrades for your computer, and those who upgrade to an SSD will almost never be able to go back. So, let’s say you are convinced; you know the size you need and you’ve decided you’ll get one. Wallet in hand, you are ready to buy one, but you realize there are a lot of them. Which is the best one? Which is the best SSD in a given size class? Read More

Today, we have a product from a company typically associated with the server and business market, HighPoint Technologies, Inc. What we’ll be taking a look at in this article is their RocketCache 3240×8; a product for combining multiple SSDs and HDDs into high performance, high capacity storage solutions. Read More