I recently started looking for a quieter Northbridge heatsink to
replace the stock heatsink. After much searching and reading of
web reviews, I found that the
Zalman ZM-NB47J
is a passive heatsink that is more than capable of properly
cooling a modern Northbridge heatsink, so long as the chipset does
not have built-in graphics. In fact,
some
reviews (and see here
and here
and other links that I seem to have lost. 🙁 … )
have shown that this passive heatsink allows just as good
an overclock as some active cooling solutions.

Thus, the Zalman heatsink seemed like the perfect choice. However,
there was a snag: the pushpin-type heatsink mount was only designed
for motherboards with holes surrounding the Northbridge (Read: Athlon
boards.) Intel P4 boards, by contrast, have a bizarre hook and spring
clip mount. Uh-oh.

The solution that most people have come up with is simple and elegant:
use Arctic Silver thermal epoxy to permanently attach the heatsink.
However, I have major qualms about permanently attaching anything
to my motherboard (an Abit AI7). I believe that modifications to a
system should be as transparent as possible, and part of that
transparency includes
being reversible. So, I decided to create my own spring clips for the
Zalman ZM-NB47J.

This is probably the cheapest mod you’ll ever do. I bought 200 feet
of 16-guage galvanized utility wire for under $5 (If you can find
it in shorter lengths, it’s even cheaper.) For tools, all I needed was a
ruler, a pair of pliers, a pair of wire cutters and a pair of needle-nose
pliers.

To start off, you’ll need a template. Look at the template below
in Figure 1. 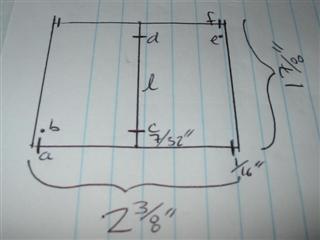 Now, cut a 12 inch length of wire, straighten it and
line it up along line L. Using the pliers, grip the
wire at point d so that the edge of the pliers are
just below that point. Bend the wire 90 degrees to the right
towards point e.

Next, use the same method to make a 90 degree
bend in the wire at point c towards point
b. See the Figure 2 below. 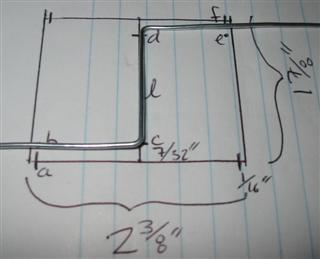 Next, use the same method to make a 90 degree bend at point
e into the paper. I have personally found that it
is best to actually grip the wire about 1/16 of an inch
inside from point e so that the wire exits the
bend at the position of e. Make a similar 90 degree
bend into the paper at point b. See Figure 3. 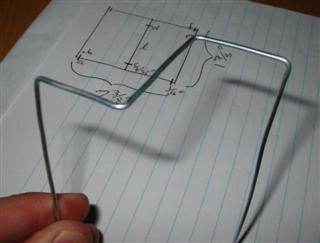 Okay, we’re now ready to make the hooks in our new spring
clip. Using needle-nose pliers, grip the portion of the wire near point e
that faces into the paper. Bow the wire out slightly towards point
f. Then, move the needle-nose pliers along the curve
and continue to bend the wire. Continue in this fashion
until you have bent the wire in a gentle loop with diameter
similar to a pencil. See Figure 4. 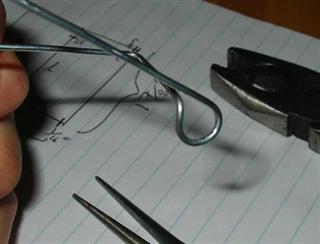 Do the same at point b, making a hook that faces
towards point a.

Now, bend the two hooks at approximately a 45 degree angle
outwards towards the corners. Trim the hooks off
and you’re done. See Figure 5: 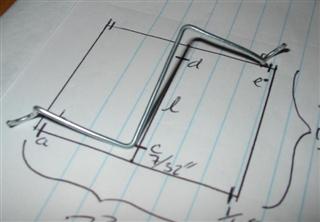 Note that you may need to experiment with the angle
of these final bends and how far down you trim the
hooks, to be conservative. You can always trim more
off later.

Notice that on one side of the heatsink,
there are two adjacent rows of fins that are
shorter; this side of the heatsink should face your
CPU. On the opposite side there is one row of shorter
fins; that side should face the AGP slot.
You should wedge your clip along the center of the
sink (There should be 5 fins on each side of the
clip.) See Figure 6 to get a better idea of where
the clip goes. See Figure 7 to see the mounted
heatsink. 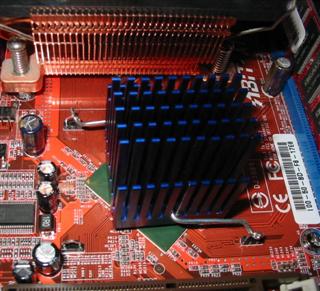 Figure 7: The ZM-NB47J heatsink with our custom mounting.

I found that there was no need for any additional shims on the
heatsink, as the core of the chipset is level enough for the
heatsink to sit level on the core with a thin layer of Arctic Silver III.

Another thing that you can do is make an identical clip with the hooks
in the opposite directions. In this way, you can obtain a complete
mount that engages all four loops on the motherboard. I myself
did this, as can be seen in Figure 8: 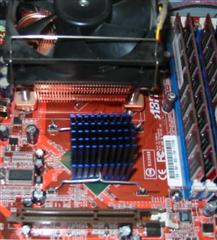 Figure 8: The mounted heatsink with 2 clips.

The system, using the custom-mounted heatsink, maintained
stability and the same overclock as with my stock Abit cooler.
For reference, I’m using a Pentium 4 3.0C overclocked
at 3.45 GHz at 1.575 volts. I’m now running 4 x 512 MB of Kingmax PC 3500 in dual channel mode, and the CPU is clocked at 3.5 GHz. Using this
heatsink, I’ve been able to run 10 loops of Sisoft Sandra’s
CPU arithmetic, CPU multimedia, Memory, and Cache & Memory
benchmarks. There have been no problems in gaming or folding,
and I’ve been able to run several loops of memtest86 with no errors.

One thing that I would have liked is to have found a stiffer
steel wire. This would have made a “springier” clip,
but I was unable to find such at Lowe’s hardware. On the flip side,
this was most likely much easier to form.

On the whole, I’m very satisfied with the results. I have
completely passive cooling of the Northbridge, my overclock
has been unaffected and I can always choose another
cooler later, if I so choose, so I’m not locked into the current
cooler.

Lastly, I’d like to note that I found no net benefit in using a second clip over the first. One clip was sufficient to hold the NB heatsink in place, and the second was more difficult to mount.

Email me with any questions or comments – Thanks!