The good guys at Danger Den sent over a sample of their MAZE2-2 Socket A copper waterblock. If you want to get max peltier cooling for your Duron or T-Bird, this design will hold two 40 mm peltiers, with different fittings for the peltiers and CPU mounting. 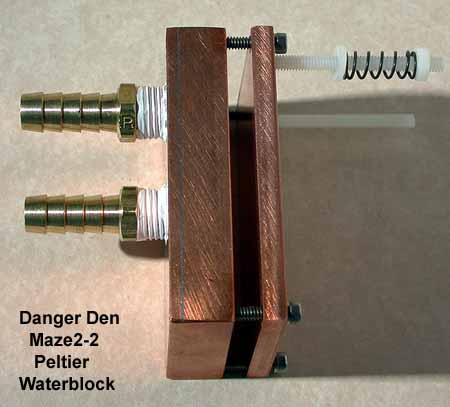 As this pic shows, Maze2-2 consists of the waterblock and coldplate, with one set of mounting hardware to hold the complete assembly to the motherboard with spring loaded nylon bolts, and a second set to sandwich the TECs to the waterblock.

This is quite important: TECs are spec’d with mounting pressures averaging 150 pounds – there is no way you can get this amount of pressure with a system which relies solely on CPU mounting pressure, typically about 15-20 pounds. The Danger Den waterblock uses two separate mounting systems which allows for different pressure.

The pic above shows the bottom of the coldplate; allen screws bolt the coldplate to the waterblock which can be tightened very hard to give maximum pressure to sandwich the TECs between the waterblock and coldplate for high efficiency. Always use a cross-wise pattern when doing this to avoid unequal pressures. 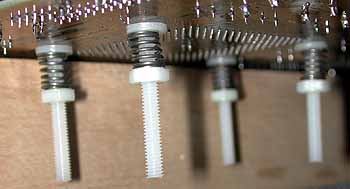 The whole assembly may require a little adjustment to fit on the motherboard; I found I had to bend the leads from the TECs to clear the capacitors near the socket. The small wire coming out the side is the thermocouple I used to monitor CPU temps. 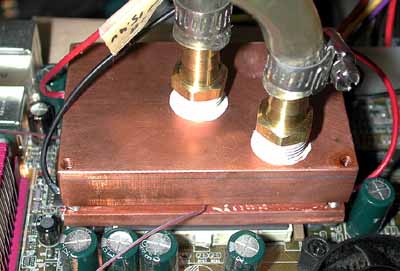 I found that the best stable speed I could hit was 1050 MHz, although I could boot fully into Windows at 1100, but Prime 95 was not stable after running for about three minutes. I ran Prime 95 at 1050 MHz until temps stabilized – about 30 minutes. My objective in this test was to record CPU temps at the highest possible stable settings.

After I stopped Prime 95, I waited to see how low CPU temps would go at idle: After about three minutes, CPU temp was -10.1 C and holding, at which time I terminated the test (frost was building up very quickly on the coldplate).

The Danger Den Maze2-2 Peltier system very easily handles two 40 mm TECs, and I think this is what’s required if you want to drop AMD CPU temps below ambient. Larger TECs are available, which is what you will need to get substantially below ambient.

However, I did not insulate against condensation, which is absolutely required for anything substantially below ambient temps. Controlling TECs to keep CPU temps at ambient +/- 5 C is not an easy task and about the most variation I would recommend without insulation. Adding TECs to your system requires careful planning as to what you are trying to achieve, additional power supplies and very careful implementation.

A look at a Q-Power dual setup — Colin Thompson