SUMMARY: Danger Den’s Socket A waterblock mounts about as securely to the motherboard as you can get – a great idea for peltier systems.

The good folks at Danger Den were nice enough to send us a sample of two of their latest products, the Socket A version of their waterblock and a dandy Socket A clamp. I’ll take a look first at the waterblock, then the clamp. 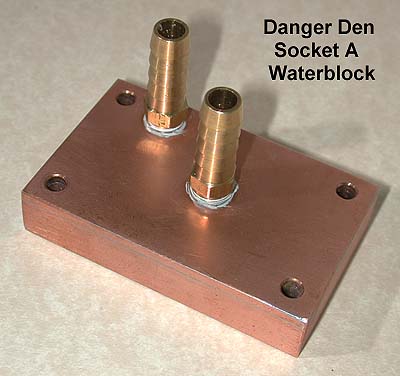 As you can see from the picture above, it is nicely finished with no rough edges or machining marks. In addition, it has four holes for Socket A mounting. These holes are also very handy for bolting a peltier to the waterblock’s base with more pressure than you would use for mounting to the CPU, resulting in improved performance.

This version is made differently from the others: Water enters the block in its center, over the CPU, and exits at the side. The maze starts at the center point and winds its way to the exit nipple. The idea is to get cooling water directed onto the CPU core.

The pic below shows the mounting technique. Danger Den uses nylon bolts and nuts to secure the waterblock to the motherboard using the four holes around the socket. The two nuts on the bottom are used to secure the bolts to the motherboard; tightening one against the other holds the bolts securely in place. Then line up the four bolts into the four holes in the waterblock, add the springs and tighten with the remaining four bolts, being careful to tighten the bolts in a crosswise pattern.

I mounted the waterblock on the ABIT KT7, one of the more “unfriendly” motherboards due to the closeness of the capacitors to the socket. As you can see, no problem – plenty of clearance. 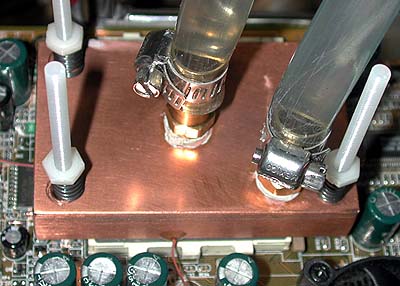 Danger Den was kind enough to bore a hole through the base laterally so I could epoxy a thermocouple above the CPU. The thermocouple is attached to an Omega HH23 Digital Thermometer. Ambient temps were measured with a thermocouple placed about 1 inch from the radiator fan’s intake. I used Prime 95 to stress the CPU on an ABIT KT7, running a Duron 800 @ 1000 (52.6 watts). The Duron is actually a more severe test as its area is less than the T-Bird, so there is a higher watt loading by area. Arctic Silver grease was used in all tests.

For this test, I used a Danner 1.5 submersible pump with the Danger Den Cooling Cube.

Hitting a C/W of 0.15 is possible with air under optimum conditions and with a heatsink designed for it (an example HERE); one advantage of water cooling is that it is possible to hit low C/Ws under less than ideal conditions, as water cooling is much more efficient and quieter. In addition, adding peltiers to the cooling burden does not push water cooling to the max as it might do with many air cooled solutions. 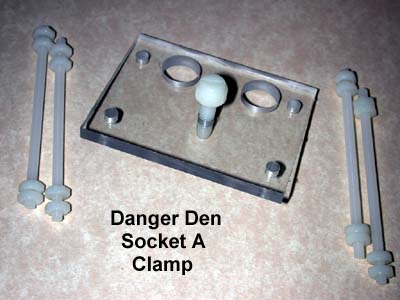 As you can see, this is an acrylic clamp which takes advantage of the four holes surrounding the socket; as overclockers, we are thankful to AMD for giving us these nifty holes – you will see more products using them rather than the all too often breakable socket lugs.

Each nylon bolt has four nuts on it; two to secure it to the motherboard and two to straddle the acrylic clamp, as shown below. 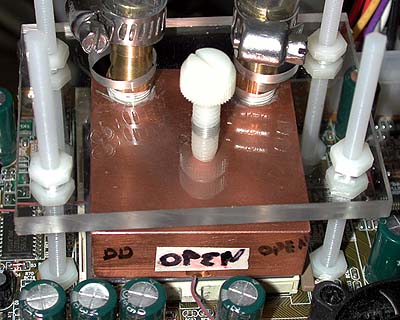 Now what’s neat about this is not that it looks great, but that you can screw down the clamp about as tight as you dare. Now, I’m not advocating that you get one of these and attempt to crush your CPU, but you can get clamping pressures that may get you better performance than your current clamp.

To test this out, I used Danger Den’s smaller waterblock using both the acrylic clamp and a metal clamp that latches on to the socket’s lugs, using the same setup as above, with the following results:

Same results for each clamp, but with more peace of mind with the Acrylic clamp. The one drawback that I can see with the Acrylic clamp is that you have to take the hoses off the waterblock to mount the clamp. Obviously, if you are replacing a clamp, you also have to remove the motherboard from the case to mount the bolts onto the motherboard. However, if you’ve broken a lug off your socket, this is a great way to hold down your waterblock without using the socket’s lugs.

Thanks again to Danger Den for sending the test samples!

Summary: Every once in a while a really simple, inexpensive, good product comes along that we can recommend without reservation – this is one of them. OBSERVATIONS The Card Cooler is an idea that is so worthwhile it makes you