Danger Den was not only nice enough to send samples of their latest copper waterblocks to test out, but they also drilled holes in the blocks so I could insert my thermal probe into the base. 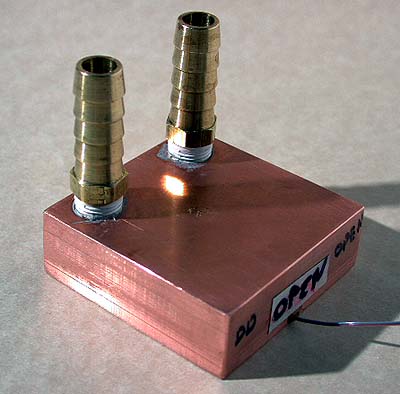 As the pic above shows, I asked Danger Den to bore a 1/16″ hole into the base of the waterblock – the base of the hole is over the CPU’s core. I inserted the thermocouple wire into the hole and epoxied it into place. This enables me to more accurately measure temps at the top of the CPU to assess cooling performance.

Danger Den sent us two designs to test out: One is their “Maze” 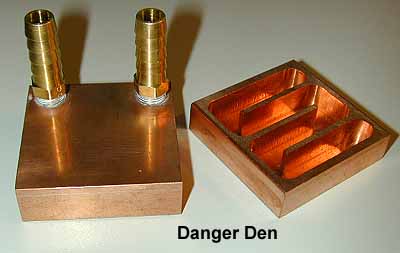 as shown above. Customers have been asking for an “Open” design – this is one in which a round chamber has been bored into the copper 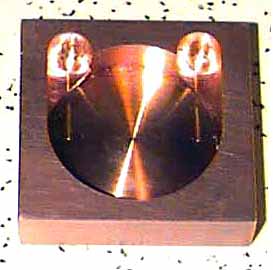 as shown in the pic above. No maze, just open space.

To test out how each does, I used Danger Den’s Cooling Cube with a Danner 1.5 submersible pump to cool a Duron 800 @ 1000, 1.93 volts, 53.75 watts, on an ABIT KT7. I used the Omega HH23 Digital Thermometer to measure temps after running Prime 95 for about two hours. The only change made was changing waterblocks. I ran three series of tests, alternating blocks etc., to ensure consistent results.

Looks like the block design alone accounts for a 2 C improvement in CPU temps – clearly the “Maze” is more efficient at removing heat than an empty space.

Based on some work I had done a while ago with heatsinks in water, no question that adding fins results in improved performance. The Danger Den design exposes more copper surface area to water which, I believe, accounts for its better performance compared to the “Open” design. Just as in air cooled heatsinks, surface area is the name of the game.

Interesting to see what more surface area does for performance. I’d really like to see some more innovative approaches to increasing surface area in waterblocks – any takers??

Thanks again to Danger Den for sending the blocks and accommodating my testing needs.


Data on Coolants and Liquids Used in Computer Watercooling