Note the fins visible through the holes.

The good guys at Danger Den let me play waterblock designer. Just like with air, surface area in water cooling plays a large role in cooling effectiveness. I had an idea* that if you cut some fins into a copper plate, the resulting block would be perform very well. Danger Den listened to my idea and decided to try it out as follows:

Take a chunk of copper, cut it one way, then another, and voila! A Pin Fin base!

Which is what they did. The pic below shows the fins in the base: 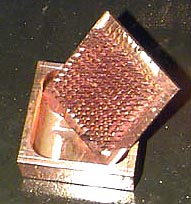 Drill some holes for the nipples and then solder the base onto the top.

In the tests that follow, I used the coldplate with the thermocouple in it to measure CPU temps, comparing it against Danger Den’s Maze block. I used Danger Den’s Cooling Cube with a Danner 1.5 submersible pump to cool a T-Bird 750 running at 1100 MHz, 1.85 v. Here’s what I found:

Well, so much for my talents as a waterblock designer.

I have to hand it to the Danger Den folks for trying this out – they are busy filling orders and taking the time to do this was really special. I am guessing that the total surface area of their maze block is about the same as the pin fin experimental block, accounting for its fine performance. Compared to a block with no maze or fins, the Maze does do a better job, as we showed HERE.

Philippe Bartoszewicz reminded me that he built the same block some months ago and showed it to me, which I unfortunately forgot. Credit where credit is due! My apologies to Philippe for the slip.

Performance for Pennies (Or not, as the case may be)