SUMMARY: Aggressive cooling for the GeForce2 MX GPU is not worth it – memory limitations hold back any real gains.

The good guys at Danger Den sent over their copper video waterblocks to try out. A great way to cool the GPU, I decided I wanted to go a step further so I decided to try peltier cooling on a Leadtek GeForce2 MX to see what gains might be possible. 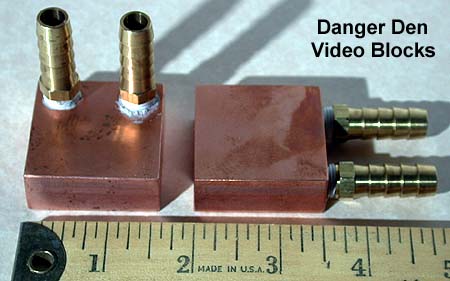 Two models – for hot Northbridge chips, the block on the left is perfect!

The first thing I did was to lift off the stock heatsink; I was surprised to find a temperature probe! Nice of the Leadtek folks to safeguard the GPU from frying (I assume). Also speaks to the temps that the GPU generates. 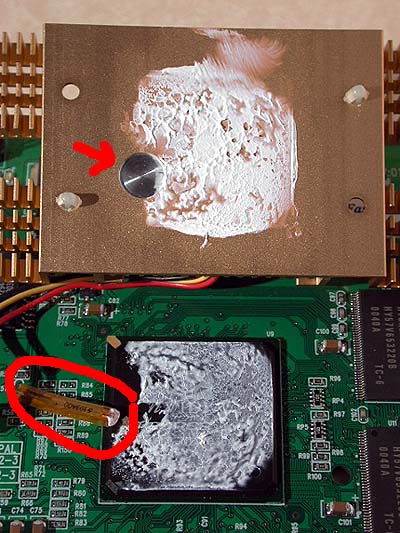 Hello! I found a temp probe underneath the heatsink. I guess an anti-fry measure? Note the cutout for the probe in the heatsink.

For this test, I used a 50 watt TEC at 9.2 volts. I decided to run it at 5 volts first, figuring that, if needed, I could switch gears and goose it up if needed; turns out it was not needed. 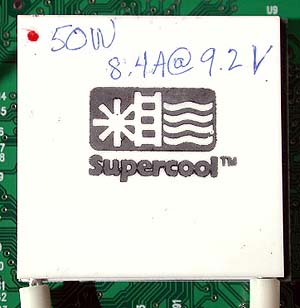 The TEC I used. I ran it at 5 volts – supercooling was not justified.

After removing the stock heatsink, I fashioned a clamp for the waterblock out of a piece of aluminum stock. Easy enough to do – just measure the distance between the two mounting holes and drill bolt holes into it. I then greased it up and bolted the waterblock into place. 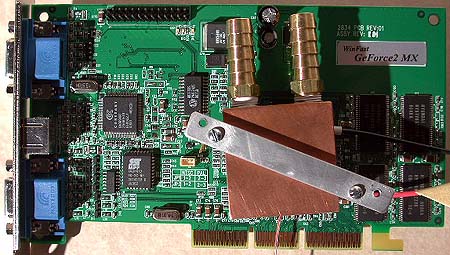 The waterblock is canted a little bit to clear the capacitor between the nipples.

As this shot shows, the TEC was the same size as the GPU so I did not use a coldplate. I also did not have to insulate it as humidity right now is low enough so condensation is not an issue. 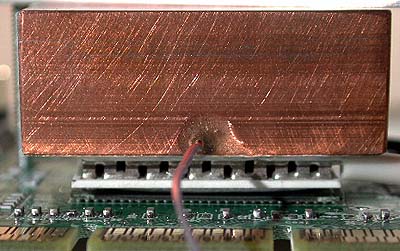 The TEC is the same size as the GPU so I did not use a coldplate; the wire is the thermocouple used to measure TEC hot side temps, which averaged about 25 C.
THE TEST

To try this rig out, I separately powered the TEC with a 12 volt power supply, using the 5 volt leads. I held the RAM speed constant and slowly upped the GPU speeds. With air cooling alone, I could get this up to about the 190-200 MHz range. As you can see below, I got well beyond that but unfortunately with no real gains:

Frankly, not worth the effort! I did notice that at 230 MHz, the cursor stayed on the screen in Quake – an indication that I was really pushing the limit. All told, an interesting experiment that shows there is some real headroom on the GPU but the 6ns RAM holds any gains back.

However, other video cards may benefit more from aggressive cooling than this one. No doubt the Danger Den waterblocks very effectively cool the GPU – considering the GPU’s heat load, I doubt that cooling it adds much strain to any watercooling system and will keep the GPU maybe 1-3 C over water temp.

Now, if someone were to change the RAM chips….

Many thanks to Danger Den for letting us play with these video waterblocks.