Ed Note: Scott did a great deal of work on pulling together data on properties of various liquids for watercooled PCs in our Forum
HERE. He gave permission to extract the key points so we could archive it for reference.

I’ve been tabulating data on coolants and liquids used in computer water cooling for the past 3 weeks and these are my results.

Please keep in mind my focus for this research was to find a coolant that would work at -30F for my project The Core Project. For those of you considering going a sub-Zero route, or just want to put your coolant below freezing (32F), this is something you’ll probably be interested in.

As for using antifreeze in your system – well, the numbers speak for themselves: 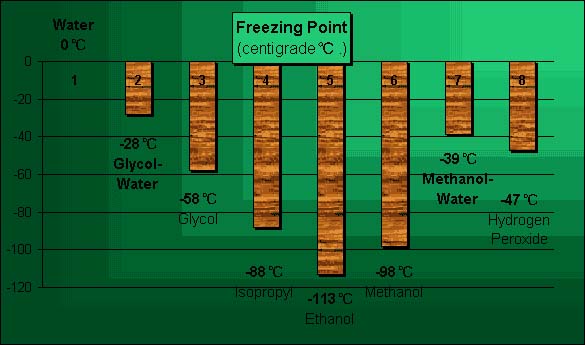 As far as WaterWetter is concerned, most of the information I’ve gotten has been from their tech sheets they have online, which seem to be pretty comprehensive. Anyhow, here’s
some good tech info on WaterWetter.

PS: Word from the WaterWetter company when I emailed them was to use no more then 5% WaterWetter in a computer cooled system, without seeing drastically diminished returns in performance.

Now that I know what I’m looking at when I look at these numbers, actually glycol wouldn’t be so bad to use if the viscocity didn’t absolutely and unequivocably SUCK more then almost anything else short of peanut butter.

Specific Heat (aka Heat Capacity, Thermal Capacity) is really only relevant when held in direct comparison with Thermal Conductivity. There is a relationship between how much thermal energy a substance can hold/store (per gram) and how much it conducts/absorbs. Things like liquids (water for example) can absorb/hold more thermal energy per gram than metal (ie copper), but it conducts it (sheds it) much more poorly than copper.

In theory, improving the Thermal Differential requires either finding a way to increase Thermal Conductivity or reduce the Thermal Capacity. Using the latter method, however, puts more strain on your radiator and requires better flow rates, as your liquid will become more sensitive to thermal changes in either direction. 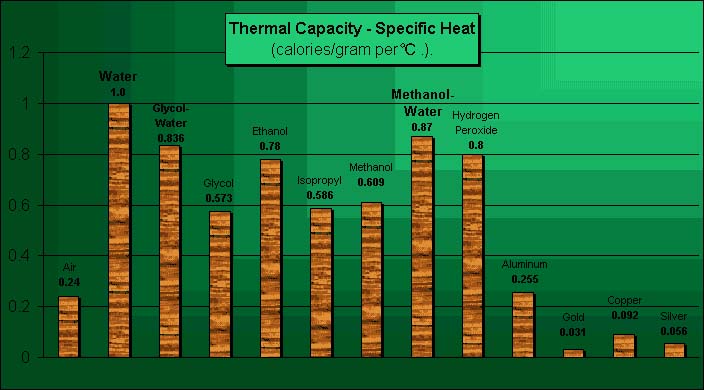 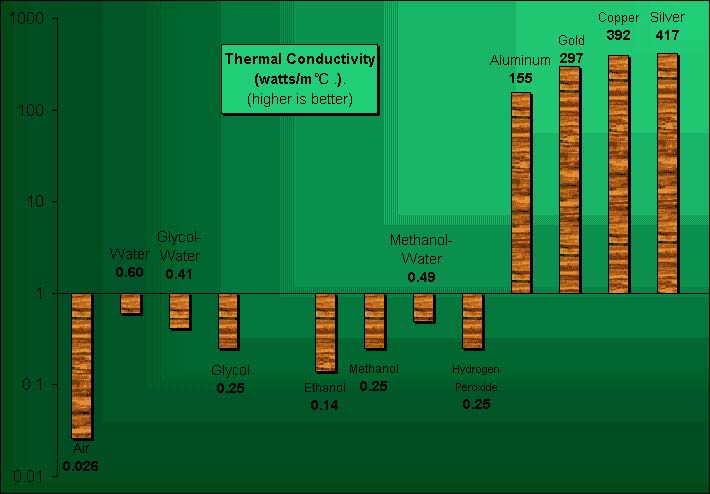 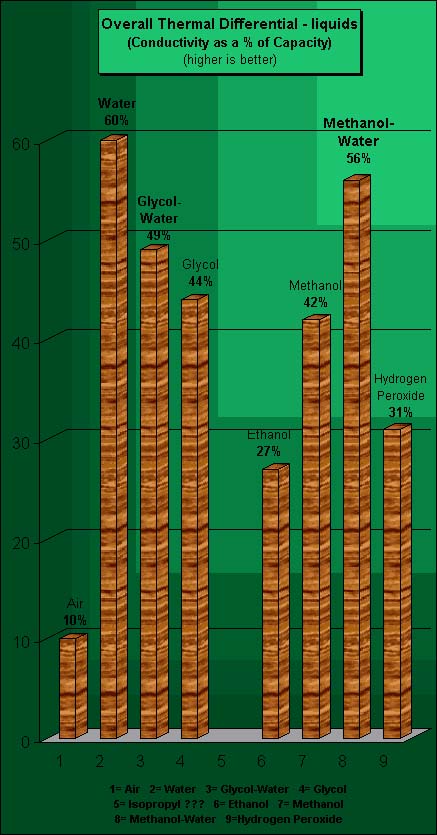 This is the Dynamic Viscosity ratings of these liquids: 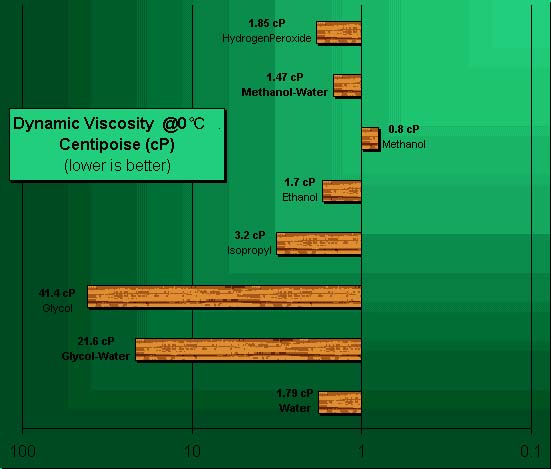 Dynamic Viscosity is the measure of resistance of liquid in a tube or capillary. It’s measured by pouring liquid in one end of a tube and measuring how quickly it reaches the other end. It is represented in Poise – the industrial standard uses Centipoise (cP) – 1 Centipoise = .01 Poise.

The other way to measure viscosity is called the Kinematic Viscosity. It is measured by dropping a sphere into a bucket of liquid and measuring how quickly it reaches the bottom. It effectively measures the amount of drag upon an object passing through it and is measured in Stokes.

The Freezing Point, the Thermal Differential, and the Viscosity are the crucial figures to look at when making your decision.

Just a note here: The term “Glycol” in all these figures is short for Ethylene Glycol Antifreeze – Prestone to be exact – using numbers from their most potent antifreeze that they supplied me upon request via email.

The term “Isopropyl” in all these figures refers to Isopropyl Alcohol (rubbing alcohol aka 2-Propanol).

Keep in mind that water is the best stuff around for heat transfer.

The closer we can get our liquid to the efficiency of water, the better. Water is the standard in all these figures and the standard in which we are trying to meet or exceed (when possible) when choosing an efficient coolant.

What we’re looking at here are two very comparable substances. The differences between them are often times negligible, with Methanol generally acting a little bit better then Antifreeze. Where the differences REALLY become evident is in the Viscosity. The Viscosity of Methanol is what really gives it a HUGE lead over Antifreeze from the word go; and the colder it gets, the more apparent that fact becomes.

Antifreeze is most definitely a great product for cars because they operate at 200+ degrees. Viscosity doesn’t become much of an issue in that kind of heat because heat thins it out. Methanol would be terrible in a car because of its extremely low evaporation point. Alternately, it’s also why Antifreeze is going to be terrible in your computer. Viscosity becomes a BIG issue in computer cooling, especially the colder you go.

With computer cooling, the vapor point doesn’t often become much of an issue and we don’t have much to worry about there (it doesn’t take much to reduce that worry to “nil” with a decent radiator). But that Viscosity – man, thats the ticket! Water thins out the Antifreeze. Methanol thins out the Water, and the thinner our coolant, the faster we can pump it. The faster we can pump it, the better heat transfer we can effect.

That’s how it works kiddies. The fact that it’s so potent and has such a low freezing point means that we don’t have to use as much of it either, which keeps our water-to-substance ratio considerably higher with Methanol as opposed to Antifreeze.

Antifreeze should be called Anti-boil. That’s where it works best and where the focus was on when they designed this stuff initially.

Try to swap them out and you’re going to get some really inefficient performance. 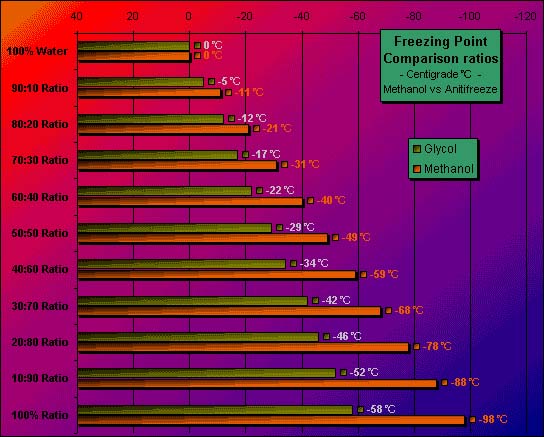 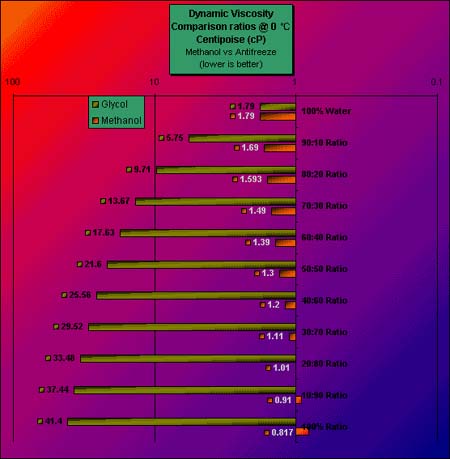 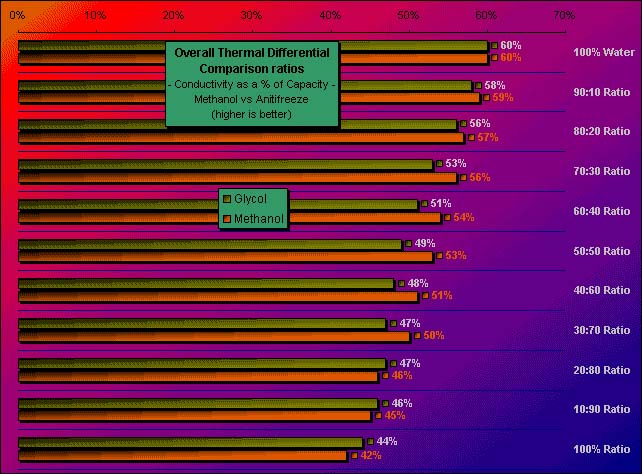 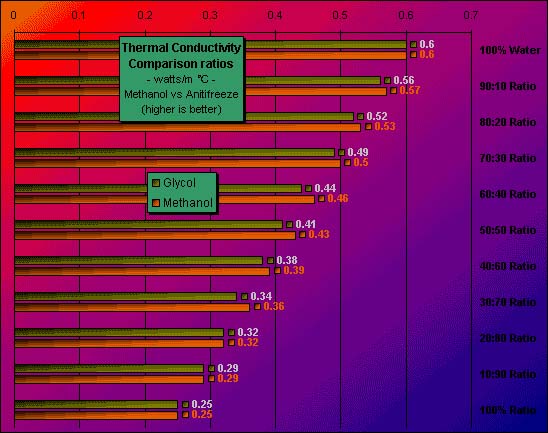 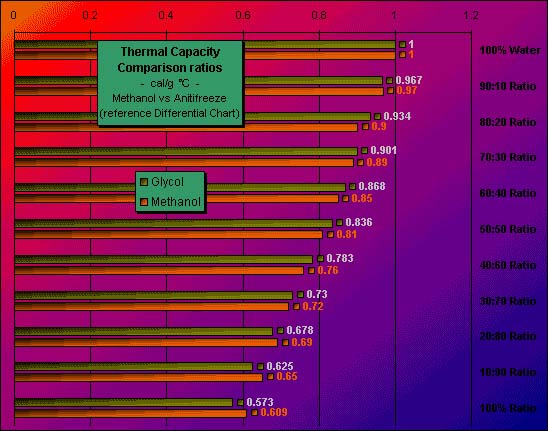 Freezing Point, Thermal Differential, and the Viscosity are the crucial figures to look at when making your decision.

I’m sorry that these are all on a vertical plane. I tried to make them as easy to read as possible, but with so much information I had to do them all vertically, otherwise they’d run way off into the borders. If you have any questions, feel free to ask.

WaterWetter decreases the freezing point by ONE degree and improves performance in a car up to 15% by breaking up the surface tension. I haven’t gone into the issue of additives in your coolant, but basically how it boils down is that additives should be considered just that – an additive, something extra, a way to possibly add a small edge to your performance curve, in the range of 3%-5%.

It’s not anything you can take to the bank however and doesn’t even come close be being “superior” in any fashion of the word. These two topics aren’t even in the same ballpark. Additives are just that – extra.

Some questions about the methanol mixture:

Methanol IS flammable – 100% methanol has a flash point of 12 C and a boiling point of 64.7 C. That’s pure Methanol though. Mix it with water and that ratio goes rocketing to the bottom. I’m not entirely certain, but I’m pretty certain reading in a couple of places where they said that if the amount of Methanol is below 58% or so, then it will not light at all (Here’s the Material Data Safety Sheet for Methanol).

That being the case, then the answer to your question is “no”, a 33:66 ratio Methanol/Water coolant solution will not be flammable.

As far as special equipment: No – nothing in particular. It has no detectable Ph Balance which means that it’s non-corrosive, but it should be mentioned that it’s not dielectric either, so you don’t want to spill it on your board. Something to remember is that it IS thinner than water, so you’ll want to make doubly sure that your hose clamps are fastened properly and that you have a nice tight fit around the nozzles of your waterblock/radiator to prevent leakage.

The following warning was sent in by Rob Oats (aka Tiger):

One thing overlooked which I believe is very relevant is the safety of Methanol and its applied use in cooling computers.

The toxic level of methanol vapour is 200ppm. This becomes significant when methanol is used in open systems that most chilling systems use. An open system is one where the reservoir is open to the air. Methanol will evaporate even at sub-0 temps and even with the best seals in the world, vapour is likely to enter the air around the cooling chamber and therefore the room where the system is being operated.

The inhalation of vapour is tantamount to the use of intravenous administration of the agent. My concern is the cumulative effects that this would have on the user. Details of the toxic effects of methanol can be found HERE. The short term use of methanol may not be acute, but long term exposure to methanol vapour may be catastrophic. I have no problem with the use of methanol in closed systems provided the relevant safety guidelines are followed.

Perhaps I am over cautious, but many of the people that play with these chemicals do not do the research on the chemicals they mess around with. I have personal experience using ethanol in my own system. I used it for about 3 days as an experiment.

The smell of ethanol was overpowering and I also experienced headaches during this period, which are consistent with the effects of prolonged exposure to alcohol fumes. I feel obligated to point out these facts.

Not only is it toxic but it is also highly corrosive. Not good to have in your cooling system on a long term basis.

Big props go out to Karsta (here on the Overclockers Forums) and myv65 (Dave Smith on the AMDmB forums), both of whom I’ve been corresponding with and have been absolutely fantastic in providing me with answers and overall knowledge when I just plain ol got stuck somewhere, trying to understand all this.

These are some REALLY knowledgeable and helpful guys, and not only in regards to coolants. They’ve been absolutely great. I can’t express enough gratitude. Big props also go out to Tenax too (also on the AMDmB forums). All three of them have been of invaluable aid. Thanks guys.

SUMMARY: The BE Cooling radiator is the best one I have seen for in-case cooling. BE Cooling makes the AquaStealth water cooling system; I have used it for about 9 months now and one thing I like very much is

SUMMARY: A newcomer to the scene, the Fortis A102 proves to be a very competitive heatsink for Socket A/370 CPUs. Measurements: 63mm x 63mm x 58mm; Weight 371 grams. The good folks at Fortis Technology kindly send over three heatsinks