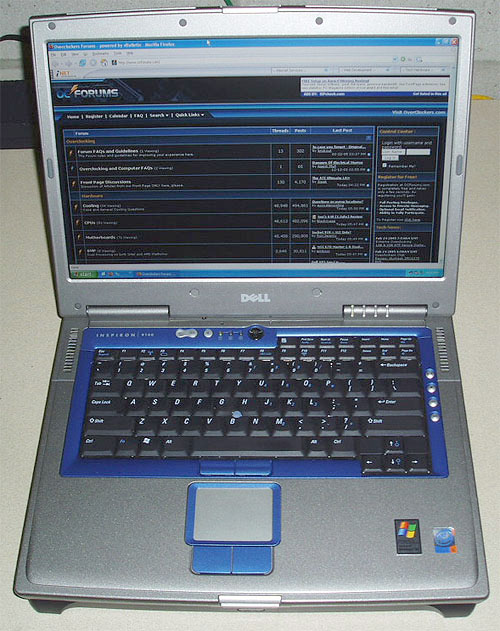 As a gamer, I had not given laptops much of any thought. After all, why spend $2,500-$3,000 for a gaming-worthy laptop when you can custom build a desktop with better performance for around $1,000. That changed last October, when Dell had a one-day, $750 instant off any purchase over $1,500 sale. I quickly researched Dell’s mobile lineup and decided the Inspiron 9100 was my best choice.

The 9100 is a DTR (desktop replacement) that promises to give excellent performance in both gaming and multimedia – areas where laptops have always trailed desktops. It actually shares the same chassis as the Inspiron XPS, meaning you get the same package minus the gigabit Ethernet and silver XPS accents, at a few hundred dollars less.

It was configured as followed:

The price was a cool $1,054.55 after tax and shipping. My primary reason for choosing the 9100 was to have a portable system that can do anything – take to LAN parties, encode videos, watch movies, etc (and hopefully, a productive thing or two). Features such as weight and battery life were of less importance.

Overall, I am very pleased with the construction of the laptop. With a weight of nine pounds, it might scare off a few people, but I have yet to find it burdensome. Compared to lugging around my monitor and tower, bringing this laptop to LAN parties is a breeze.

If the blue accents around the touchpad/keyboard are not your style, you have the option of ordering the silver accents from the XPS – Dell part #’s T4461 and X1501.

My only gripe with the construction came when I noticed that there was no locking screw for the optical drive bay, which is typically found on other Dell laptops such as the 8600 or 600m. Within two seconds, the drive can be effortlessly removed, making it easy for someone to steal.

The 9100 has a wealthy collection of features:

The four USB ports are especially welcomed, since I tend to use at least three while gaming (mouse, USB headset, and game pad).

The subwoofer makes a noticeable difference – watching movies or playing music has never sounded this good on a laptop. The audio chipset is a no-thrills SigmaTel C-Major Audio that, for the most part, does its job. So far the only issue I ran into with it was in the NASCAR Racing 2002/2003 games by Papyrus. All car sound effects are distorted, making the 800hp v8 engines sound like rice burners. Apparently, this is a known problem with any SigmaTel chipset, with no foreseeable fix.

The 15.4″ LG Phillips LCD gets high marks. Brightness and color are a good deal above average from what I have seen in laptops. Being a 25ms display, I was a bit worried at first as to how it would hold up in gaming. To my surprise, ghosting never got close to being a distraction or annoying in various first-person shooters such as UT2004, Quake3, and Far Cry.

The native resolution has an unusual aspect ratio of 16:10, so you are bound to run into a few games without the proper native support. I recommend checking out the Widescreen Gaming Forum for help on getting virtually any game to work at a non-standard resolution.

No problems were noticed with the system after the obligatory format/reinstall of Windows to get rid of all the excess software Dell puts in. Since everything was working beautifully, it was time to tweak/upgrade. My next two upgrades came literally less than a week since I had received the system: a Radeon Mobility 9800 and 1 GB of RAM.
{mospagebreak}

Even though the name implies a R300 based GPU, the Mobility 9700 architecturally is R360 based; meaning performance is along the line of a desktop 9600 Pro. Running Far Cry at 1280 x 800, highest detail, proved all but unplayable (I will note that the 9700 held up on medium detail perfectly). This was solved by upgrading to the R420 based Mobility Radeon 9800. The cost was $260 after canceling the optional $90 Dell at-home installation. 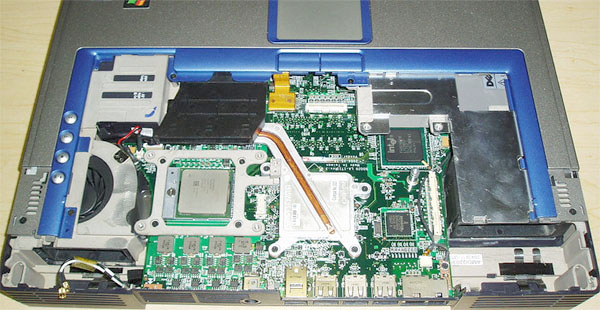 Taking apart the 9100 for the first time proved to be a quick and pain-free process, thanks to Dell’s Online Documentation which provides a step by step visual walk through for replacing virtually any component in the system. Fourteen screws and 15 minutes later, the MR9800 was installed and working.

With its 8 pixel pipelines and 6 vertex shaders, the MR9800 handled Far Cry with ease. Even more amazing was the overclocking success that was achieved with the card. From the default 350/300 clocks, it went up to 470/450 artifact free. For everyday use, I keep the card at 420/420 so it holds up in the long run.

Temperatures were monitored by a free utility called I8kfangui. Not only can you monitor the temperature of the GPU, CPU, memory, and hard drive, but you can manually control the system fans or set custom profiles for when they come on.

Downside To This Behemoth?

There are three clear downsides to the 9100:

Running normal desktop tasks, I averaged roughly an hour and thirty minutes of battery life with the 3.2 GHz Prescott – abysmal by today’s standards when you have Pentium-Ms reaching up to four hours.

If you thought keeping the Prescott cool in a desktop was a daunting task, just think about it confined in a laptop. Less than a minute into a game and you’ll hear all three of the system fans jump up to their maximum speed of 4500 RPM – or the sound of a blow dryer (remember the Geforce 5800 anyone?) Monitoring the temperature showed 53ºC idle with a peak of 68ºC running two instances of Prime95.

Fortunately, there is an easy solution to these problems:

Since the 9100 is a socket 478 platform, it can accept any Northwood P4. In went a P4 3.0C with satisfying results. Battery life increased roughly 35%, or two hours and twenty minutes under normal desktop tasks. Temperatures dropped down to 40ºC idle / 55ºC load. Under gaming, the fans stay at medium and rarely run at full speed. Despite the 200 MHz clock speed disadvantage, there were no apparent differences between the two CPUs outside of benchmarking. {mospagebreak}

Usually comparing a desktop to a laptop is an “apples to oranges” comparison. The CPU, memory, and chipset are usually entirely different architectures and speeds.

Since the 9100 uses a desktop CPU, desktop chipset and dual channel memory, I was able to have a comparable platform; the only difference being the graphics cards, with the MR9800 having two more vertex pipelines compared to the desktop’s 9800 Pro.

118.7
118.5
0%
Performance between the desktop and laptop in RTCW is virtually identical.
With the help of the vertex pipes, the 9100’s MR9800 pulls ahead in 3dMark 2003.
Once again the mobile counterpart fares well, this time in Far Cry.
Ultra Quality playable on a laptop? Definitely.

39.91
44.50
10%
The system is probably CPU limited in the River and Steam benchmarks, explaining the relatively small increase with the video overclocked.
Turning up the eye candy obtained at least a 27% increase in performance across the board when overclocked.
31% free performance – not too shabby.
CONCLUSIONS

With its long list of features and high performance, the Dell Inspiron 9100 is highly recommended for anyone looking at a mobile gaming system without spending their life savings. It may not have the fancy looks of a VoodooPC or Alienware, but in my book performance and value come first.

While Dell officially dropped the Inspiron 9100 from its lineup last October, you can still purchase it from the Dell Outlet as a refurbished unit. Another alternative is eBay, where a number of 9100s will be listed at any given time.

There’s a bunch of disputes going on in cyberworld about whether or not the graphics on these new consoles are a bit better or worse than that of a GeForce 7800. You can see some comments here and here about

Consider the Alpha FC-PAL35T as a sub for the Alpha PAL6035. It works very well. The feet on the bottom (for the FlipChip PIII’s) can either be cut off or popped out with an exacto knife. Even with just a

In case you’re wondering what the title is about, one of the governmen-owned investment firms of the UAE emirate of Abu Dhabi, Mubadala Development, is going to buy $700 million of newly issued AMD stock We Told You So (sort