As the trend towards small footprint systems and mobile computing accelerates, the traditional desktop tower is looking more like a dinosaur.

It started with laptops and Shuttle’s “toasters”. Consumers who equated PCs with desktop boxes of some size quickly accepted that computing did not require large footprint boxes. Laptops grew to take the dominant market share and during the last few years, desktops transitioned away from the traditional separate wired mouse, keyboard, screen and PC box to what is now being called “all-in-one” PCs.

One example is an offering from Lenovo A600. 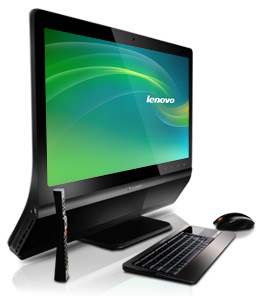 Aesthetically pleasing and no computing slouch, it integrates all the hardware into the screen profile. It also blurs the boundaries between PC and TV with an optional digital TV tuner. Notice no wires – what I have behind my desk is a rat’s nest that sometimes requires moving the desk to figure out what goes where (not to mention the dust it catches).

While laptops may contribute to the tower’s demise, I believe mobile computing (ie smartphones) and GPS devices are potent forces which lead users to rely less on desktop towers for their “computing experience”. One example of how far computing power is being distributed are what’s being termed “PMP” – Portable Media Players. engadget featued a Korean unit that incorporates GPS capability, again making the distinction of a PC blurry. Another unit, the Hyundai Provia A7+ GPS unit is a GPS that incorporates PMP functionality.

I think the biggest factor is manifested in the iPhone. Moving PC functionality into a cell phone frankly is sheer brilliance on Apple’s part for one, recognizing the consumer’s desire for mobile computing and two, delivering not only the product but more importantly the software through the App Store. This takes mobile computing to a higher level – truly compact but yet delivering PC functionality, only limited by screen size. I would not doubt that we will see an iPhone dock which turns it into a desktop PC, eliminating the need for synchronizing among disparate PCs.

There will always be a need for “tower computing”, but I believe this will be for workstation type functionality such as for heavy-duty image or audio processing. The office PC will most likely devolve to smaller footprint systems with “just enough” PC power which will save on cost and energy at the corporate level. Integrating and synchronizing among various PC solutions will most likely drive a solution centered around one core unit that docks into multiple formats – desktop PC, laptop and smartphone.

Apple just might make a huge leap into the PC market using the iPhone as the driving wedge – could shake up the industry in a big way.

Excuse Me, But Did You Test This?

Our comments on Cuil.

I’ve read both sides of the RAMBUS issue, and I’m finally ready to offer my opinion on it. What I’m against is unreasoning hate and prejudice against a company for reasons that have no valid foundation. I’d like to remind