SUMMARY: Adding some finishing touches to your computer case, and more.

I recently received a few items from the fine folks at Directron, and today we’ll look at some of their detailing products.

After exchanging a few e-mails, I was asked if we could review a few “overclocking” related items, as they would best pertain to us here at Overclockers.com. I thought that would be a great idea.
I had originally hoped to get this article done in time for Christmas, but real life has a way of making “the best laid plans of mice and men” go awry. So, the thought process will shift from
“Christmas Gift Ideas”, to “Here’s some cool things you can add to that new case you just got for Christmas”.

Directron stocks a vast number of varieties of badges, decals, lights, and more to accent and personalize your PC. These items are just a small number of what is available. 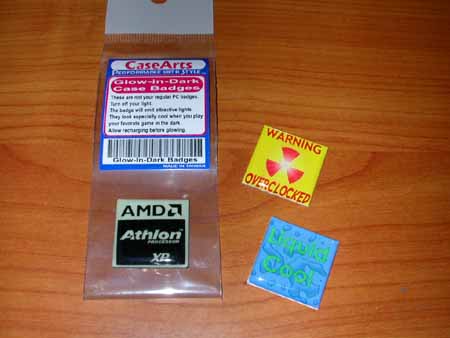 Case badges, while usually used by the major manufacturers to denote what CPU is installed, or which version of Windows the machine is “optimized” for, also have a wide range of varieties of custom designs.
From cars, to planes, to sports, Linux specific, flags, gaming, to computer components (CPU, graphics cards, motherboards, etc) and more. Directron even stocks an assortment of “bikini” badges, for the “over 18” crowd.
They also have facility to custom design your own case badge, if you wanted (in quantity).

The three pictured here are of very high quality, and are of a clear, bubble-domed design, with a scratch-resistant top surface made of Lexan. Lexan is a polycarbonate plastic, the same material used for bullet-proof glass.
I’m not saying you should go and shoot a round or two at them after installing and test that theory out, but the point is, they aren’t cheesy, thin foil badges. In fact actually, you might have a difficult time trying to mount one
of these on anything other than a flat surface, as they don’t bend much (at all, really).

Over the last year or so, I’ve become somewhat of a “case badge collector”. I could, if I wanted, amass quite a “collection” of them just at Directron’s site alone. The Case Arts badge pictured really caught my eye, as
it not only looks identical to the standard AMD XP case badge, but glows in the dark as well. I’ll be installing this, and another item at the end of the article to show you how it looks in place, on the front door of my Chieftec. 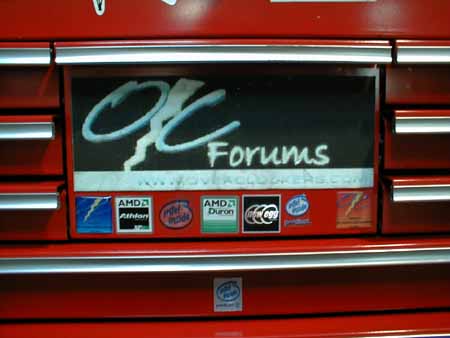 Here’s a shot of the front of my Snap-On tool box…just a few of the badges I’ve gotten, or pulled off old machines. I’ve added a half dozen more since I took this pic. They now range from the
i286 days to current (modern) CPU badges.
Keep your head warm this winter….

….or, cool next summer. Directron stocks a number of baseball style hats, with overclocking references embroidered on them. Here’s one of them:

This one proudly announces that default speeds just aren’t for you. =)
The backside features the Directron logo embroidered over the adjustment band.

This hat, as are the more than a dozen others stocked, are made of 100% cotton, in the standard 6 panel design. The band is of the button/hole type,
and adjusts to a wide range of sizes. “One size fits all”, as they say. The stitching is good, and there are no loose threads in that, or the embroidered
logos.

Keeping an eye on temps…

If you’ve got a DigiDoc, and one of the sensor cables has failed on you, Directron stocks them too. They measure out to 400mm (15.7 inches), which is plenty long enough
to reach most spots on your motherboard or in your case to keep tabs on those vital temperatures.

I had one of these (shown loose) left in the “spares” drawer from an old Abit motherboard, that had facility to plug one of these in. My old Abit cable works with the DigiDoc3 I now have,
so I’d imagine it’s a fairly safe assumption these Case Art cables are compatible with those older Abit motherboards, too. 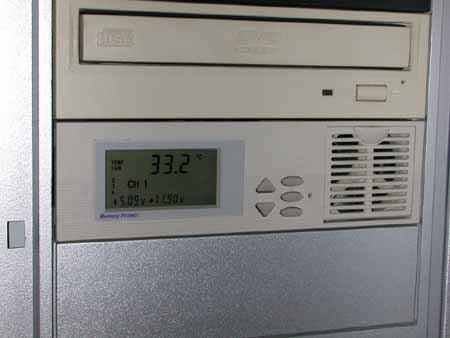 Directron also stocks a large number of decals to dress up your PC case with. They range in size from small, to quite large. Constructed of high quality vinyl, according to the specs
listed at Directron’s site, they are scratch resistant, and waterproof. I’ll, um, take their word for it on the waterproof claim, but they certainly seem to be resistant to scratches.
Let’s look at a few, and install one to see how it looks. 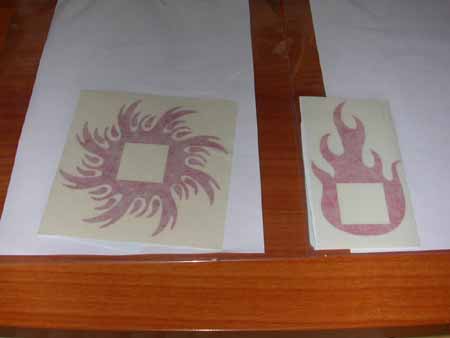 These decals are designed to surround a case badge. 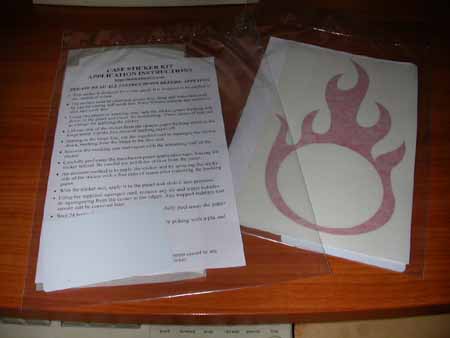 This one is meant to surround an 80mm case fan hole (blowhole in a side panel) Visible is the instruction sheet and “squeegee” on the left side of the picture. 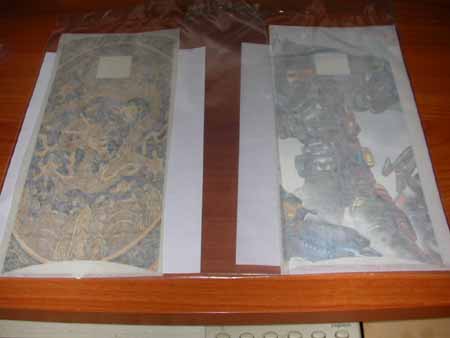 These are a pair of the larger decals. These are custom cut to fit on the center panel of the drive bay door of an Antec/Chieftec/etc style case (mid tower only).

Each of these decals comes with a pair of identical items; an instruction sheet, explaining the method for installing, and what looks like more or less a credit card blank,
to be used as a “squeegee”, for getting any bubbles out from under the sticker while installing it. Over the front of each decal is a semi-transparent “application tape”. The side to get stuck on the case is
covered with a clear sheet of plastic.

Those familiar with the game Unreal Tournament 2003 will recognize the graphic on the right side decal above, as it’s part of the cover art from the retail box. UT2K3 is just one of a fistfull of games that
Directron stocks decals like this on for. Battlefield 1942? Got it. Half Life? Yup…and even HL2, too. Counter Strike? Yes. Halo 2? Check. NASCAR racing? There’s a pair to choose from.

The decal pictured above on the left is a “woodcut” dragon design. Picture the interior decor of you local Chinese restaurant…that’s what it looks like. It’s a very sharp, highly detailed design, but when I held the two of them up
to my case, I decided to try the UT2K3 one out, as the colors were more in line with my case (heavy blue/green tones, which match my blue and green case lighting better than the red/gold of the dragon.).

We’ll begin with that “glow in the dark” case badge:

I had a bit of difficulty getting this last pic….the camera just had a hard time picking up such a low light source. In person it’s much brighter than it appears here.

The instructions outline two methods of installing these. One is to tape the entire decal and backings into position, and use the tape as a “hinge”, while removing the backing. The other
method uses water, sprayed directly onto the sticker back itself, and then “slide” the decal into position. As the protective layer over the front of the decal made it a bit hard to see through
to line things up, I opted to use the “water” method. In doing so, I found that yes, they are waterproof. =)

These door decals are sized slightly smaller than the panel they are designed to sit on, so there will be a bit of a border all the way around the decal when centered properly. I used the
bottom edge as a “guide” for placement, and as a result, it sits about 2mm lower than it should. This is most noticeable around the case badge I had put on at the top of this page, but doesn’t
detract from the overall visual.

Which ever way you go, use the “squeegee” to remove any trapped air (or water) bubbles, by working from the center out to the edges.

Hang onto the card/squeegee when you’re done with it, as
it’s an excellent tool for applying thermal compound, scraping off the thermal pads from retail heatsinks, etc… It’s a lot less risky than playing with razor blades, and does the job just as well.

Oops…I missed an air bubble (I fixed it right after taking the pic though..)

Looks pretty good, I think. The colors in the decal blend well with the rest of the case modding I’ve already done, which makes it look integrated, not tacked on.
Like I mentioned, I’ve got blue and green lighting, and the decal uses those colors primarily. Thinking like this when choosing a decal, or any other mod long after
other work has been done gives the system a theme, rather than looking cobbled together from odds and ends.

I wish I’d been able to get this wrapped up in time for this Holiday season, for gift ideas, but it just didn’t quite make it. I suppose if you wanted to have something overnighted… but I digress.
The items here would make some really nice additions to that project case you might be working on (or planning). Directron claims on their website that; “We now have more than 1700 products for modders..”,
so this is just a fraction of what they have to offer.

I’d like to thank Directron for sending these items out for reviewing.

Cheers! and Happy Holidays to all!

I’ve spoken a number of times, including fairly recently about future prospects for AMD and Intel. However, the stock market has been following the beat of a different drum. Intel stock has gone up as its prospects have worsened (even

There’s a very valuable article showing Intel’s current intentions in 2008 here. (Update: The roadmaps appear to have originally come from PC Watch.) It tells you not only what Intel will put out, but gives you a price range on