SUMMARY: An attractive mid-tower case made with an aluminum-magnesium alloy, featuring great cooling potential, lots of room for hard drives, easy access to the motherboard and super mod possibilities. 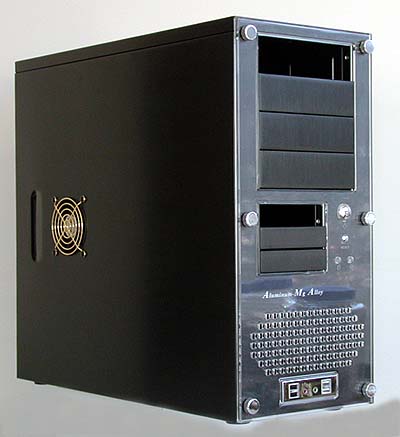 Directron was nice enough to send a sample of their black case, model SF-201-B. This is an aluminum-magnesium alloy case, which I found does not flex as much as an all-aluminum case. It weighs in at 13 pounds (w/o power supply), about half the weight of a comparable steel case. As I examined this case, I found some features I really like: 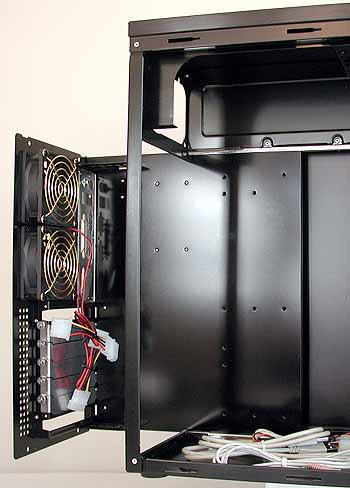 My first case with this feature was an InWin, and I’ve been hooked ever since. I can’t think of an easier way to work on a PC – just unscrew and the key internals slide out. Think of how easy this is when you have to mount a heatsink using a screwdriver (assuming it clears the opening).

The front of the case has two pieces – a plastic overlay on top of a black metal plate. There are six knurled bolts holding it in place; unscrewing them

reveals two 80mm intake fans (I removed the foam dust filter that covers them) and the “back to front” access panel. All the necessary cables are included with the case to move sound and USB ports to the front. The front fans are mated to one power plug. In addition are the usual connectors for power on, etc. The back of the case

show the two rear 80mm exhaust fans. The side cover has one 80mm intake fan – it’s positioned such that the bottom of the fan lines up about where the video card sits. This will pump air at its back and circulate air around the CPU/northbridge area. 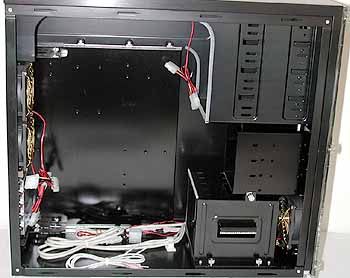 shows what’s inside. Note that all potential sharp surfacea are edged with plastic – a nice touch. At the rear 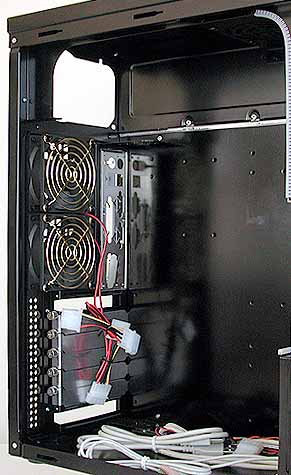 are the two exhaust fans and the usual slot covers, etc. Note again that all PCI slot cover bolts are removable by hand – no screwdriver required. Looking closer at the rear fans reveals that 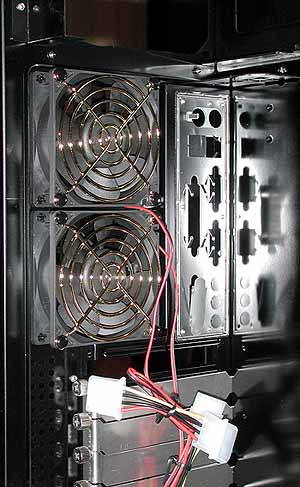 it is possible to mount a 5″x5″ radiator onto them. It will be a tight fit and will probably interfere with removing the motherboard tray, but it is possible. Looking forward 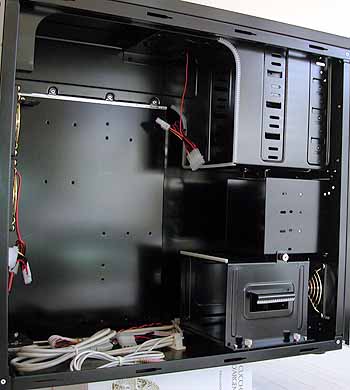 shows how much this case handle. This case can hold 4 CDs and 3 floppy/HDs in the usual spot, but in addition it can hold another 5 HDs in a removable hard drive tray at the bottom of the case. 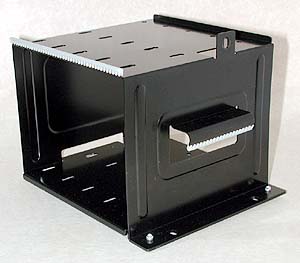 Note that the intake fans direct airflow through the tray – a nice feature for hot 10,000 rpm drives. When the tray is removed, the speaker shows up (I trash these). The tray rides on two rails and the tray is held in place with 3 knurled bolts. Looking closer at this space, 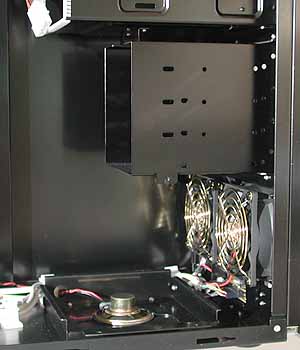 I immediately thought “I’ll bet I can get a radiator in here.” And 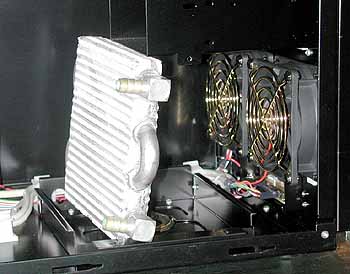 how about that – it is very possible. This radiator is a 5″x5″ BE Cooling unit. Obviously I did not remove the rails to fit the radiator – they are held in place by four pop rivets that are easily removed. The usable area, once removed, is about 5¼” high by 8½” across – enough to hold a 5″x5″ radiator.

The drive tray measures 4″ high by 5¼ wide – it might be possible to shoehorn a radiator into it (with some creative work) so that you could set up the radiator and maybe the pump inside the drive cage – a removable water system.

Finally, a look at the top blowhole: 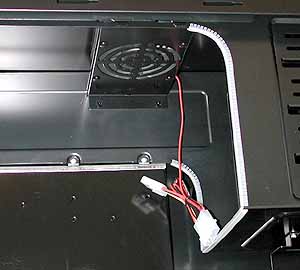 These are nice to have – after all, heat rises and what better way to get it out.

Lots of potential with this case – airflow should not be an issue and potential for mods is very high. I can easily see a portable, water cooled case for LAN parties. Priced at $150 – not unreasonable for what you get. I’m going to do some performance testing and will post results shortly.

Thanks again to Directron for sending this our way to test out.

Directron was nice enough to send a sample of their black case, model SF-201-B.

To check out how this case performs, I mounted an Epox 8KHA+ in the case, powered by a T-Bird @ 1400 MHz, cooled by a Glaciator II. I ran two tests: One at idle, one running Prime 95. I ran the system for an hour at idle and then at Prime 95 for another hour, measuring temps at the end of each hour. I used Digital Doc 5, placing temp probes as indicated below: 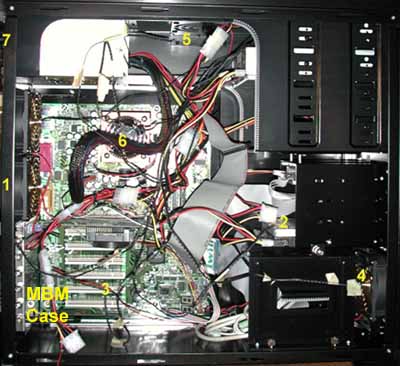 In addition, I recorded case and CPU temps using Motherboard Monitor. The case thermistor is on the lower left side and CPU Temp is from the in-socket thermistor.

I made one change to the case as shipped: I changed the orientation of the side fan from blowing out to blowing in. I thought it more important to get air onto the motherboard from this point. This gives three fans on intake and three on exhaust. The plastic pins holding the fan in place are useless – I used bolts instead.

I measured case noise levels at 50 dBA, with a Radio Shack sound meter placed 3 feet from the side of the case at a 45 degree upwards angle. I did not hear a high pitched whine from the fans – pretty much just airflow noise.

The Directron SF-201-B looks good and does a nice cooling job. For noise control, adding fan rheostats could drop noise levels even more. All told, a nice product.

Thanks again to Directron for sending this our way to test out.

Intel plans to abandon GHz in its naming nomenclaure. What’s important about this is that Intel plans to do this through the whole process line, so it’s not just a matter of making notebook Baniases or Dothans look better. When

I was inspired by this wonderful article “The Perils of Repair” to write what follows: Communications in my life between my other and I are usually as follows: a few emails back and forth in the morning, a call at

Last week, we saw some numbers which would seem to indicate that Intel’s next generation processors have jumped considerably ahead of at least current AMD processors. A natural question to this development is “Can AMD match Intel, and maybe raise