Good How-To for about $3 – Robert Wilson 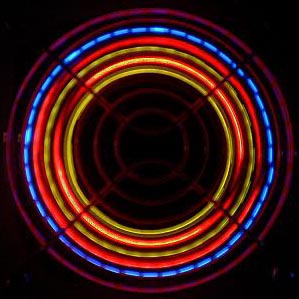 I read with interest the article on how to add LEDs to a standard stock fan and found it interesting. Always being the DIY modder type (and not concerned with looks), I normally would have never been inspired. I am always giving function priority over form and so my mods are always a little on the “ghetto” side. 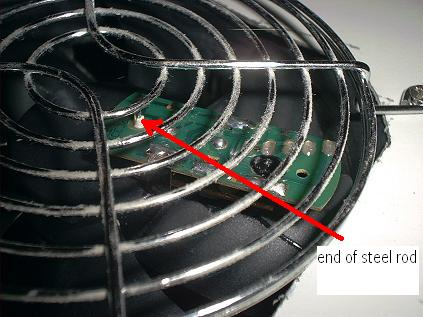 But I did finally get bitten by the “lighting bug” so to speak, and I was determined to add a splash of color to my beige box! I was not going to do the same old same old, so I looked around for a source of cool LEDs. My younger sister had bought a little “personal” fan and it had light up LEDs that created patterns whenever it was turning. I also noticed the LEDs were powered by a small button cell instead of the main power supply of the fan.

That was the starting point of my thinking process. My raw material turned out to be a small toy top that worked on the same principle – when the top spun around, it made cool patterns. It had blue, yellow and red LEDs to top it off. It was also powered by button cell battery. I decided to mount this small circuit board onto my top-mounted blowhole fan (120mm).

I first removed the fan from the case, then carefully removed the blades from the motor assembly. A small round ring was the only thing holding the fan blades on on this (cheap) sleeve bearing fan. After removing the blades, I then decided on the placement of my circuit board (easily removed from the toy top) by test driving the LEDs using scotch tape to hold the circuit in place. 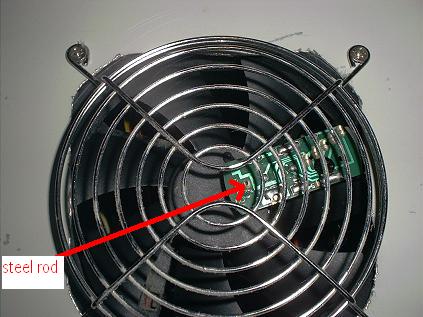 After deciding where I wanted to mount the circuit board, I drilled a small hole in the center of the fan to line up with the original screwhole in the board. Then I inserted a small steel rod (about 3/4″ long, and with a small 2-3mm diameter) through both the center of the fan and the circuit board. The button cell battery and the centrifugal switch that turns the LEDs on just sat on the top edge of one of the fan blades.

After I positioned the board as evenly as possible, I superglued the entire assembly (steel rod, board, fan blade) and sat it aside to dry. After drying, I installed the blade back on the motor assembly and spun it up. I was really impressed at home nice it looked after powering it up. I’m not sure how long the batteries will last, but I can always change them out later. 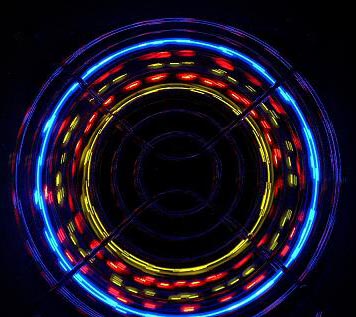 I really enjoyed the ability to change the patterns to some degree with the rheostat for the fan. Included are some pics but they really don’t show the patterns, which often look like fractals! Thanks.

We asked while reviewing a book a while back whether or not people would be interested in buying books meant to tell them how to buy and/or upgrade their PC. Recently, it dawned on me that a pretty good way

With the AMD price drops on lower-speed Opterons, more than a few people have been asking about the prospects of overclocking Opterons to FX levels at much less than FX price levels. About a month ago, we spoke a bit

Need To Buy A Dude A Dell?

. . . or HP (they’re now “giving away” LCD monitors, too, so they’re price-competitive with Dell) or whatever, because a Joe Sixpack in your life wants a new machine shortly, and you don’t want to be bothered with building