When a product breaks and it isn’t the owner’s fault, they can RMA their equipment back to the company they bought it from or have it replaced under warrantee. But when people in the OC community have stuff break, how can one return it, in good conscience, when they have broken the warrantee already by OCing?

That leaves you two options usually:

Sometimes one can repair it though, and that is what this article is about.

A couple years ago when I first built my water cooled computer and OCed my 1400 MHz Tbird to 1600 MHz, it ran quite nicely. I even took up running Seti. Then one day I started to smell smoke in my dorm room.

Not supposed to happen, right?

I paid no attention to it for a while, assuming something was burning outside somewhere. I eventually noticed that the smell occurred whenever I turned on Seti, when my CPU was loaded the most. So I stuck my nose behind my case, and sure enough, I smelled burning electronics coming out my exhaust fans. AACK!!!

I turned off Seti and the smell went away after a while. Still can’t be good right? I took off my case and looked around. Most of the hardware looked fine, until I looked at my ATX connector. Instead of two molex connectors, I had a discolored single piece of plastic: 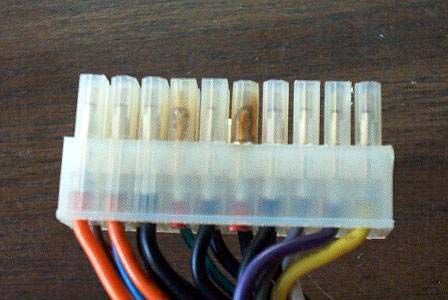 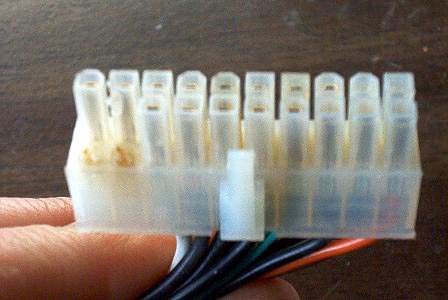 The pictures represent the aftermath of the connector. I couldn’t return my power supply because I had installed a relay to activate my water pump. I also couldn’t return my motherboard because I had OCed it. So, what to do? I didn’t really want to spend money on new parts because it was already a new computer that cost a bit. Next time I went home, I dragged my computer with me to see what my father and I could do to fix it.

First, the connector needed to be removed to ascertain the full damage. As you can see in one of the pictures, all of the charred areas are from the red wires – the 5V line of the PSU. This is what powers the voltage regulators for my CPU on my motherboard.

The connector was removed carefully by using an Exacto knife to cut slice through the melted plastic of the Molex. The next step was to get the wires disconnected from each other; this proved rather difficult, as the wires were melted to each other as well. After much tugging and twisting, they were loosened, but the connectors on the male end of the ATX cable were still stuck inside.

Since the plastic was melted on one side and charred on both, there are a couple possibilities for why it failed. One could be bimetallic corrosion, since the connectors on the PSU (gold) and mainboard (tin?) were different. The other could be inadequate contact area for passing the current across, causing too much in too small an area causing high temperatures, which could be why two of the wires were scorched together. There appeared no way to remove them, and all the 5V wires were useless in their current state.

The next step was to figure out a way to get 5V power to the mainboard. The Molex was unusable except for the rest of the wires, by way of cutting the 5V wires and plastic off the connector to get it to fit again in the socket.

The only way to power the mainboard now was to somehow hardwire the 5V.

So, out comes the 13 gauge wire and some Astroflight zero loss connectors, commonly used for radio control cars and aircraft. On the backside of the mainboard, there is a thick copper plating underneath the top bottom layer to handle the high current passing through the 5V line. Using the Exacto once again, we scraped away the layering to expose the copper. Two lengths of 13 gauge wire were soldered to the copper plating, with the zero loss connector on the end: 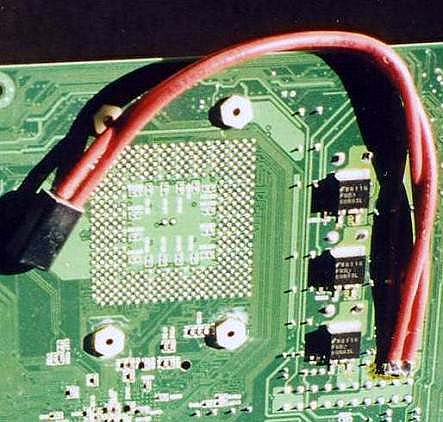 The four 5V wires on the PSU cable were cut and 2 wires were each soldered into the other Astroflight connector. Here’s the finished job and how it fits together: 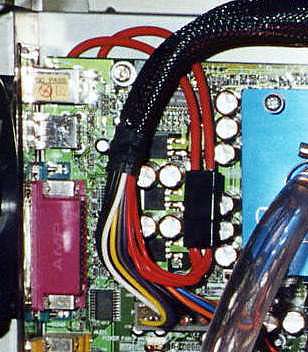 The nice thing about zero loss connectors is that they are supposed to have less resistance than the wire that is connected to them. Plus, using the 13 gauge wire hardwired to the motherboard virtually guarantees that it won’t break again, as those wires should be able to hand a good 40A each or more. Greater than my Tbird will ever see, at least.

The next project involved hardware I had acquired a couple months ago that was also useless in its current state. The victim was an Asus CUV4X, brand new and never turned on, for the previous owner had his screwdriver slip while installing a heatsink (Fess up! I know some of you reading have done it!).

So, sounds like another project, since I had nothing to lose. My father and I stuck it underneath the microscope and found a lot of flux and excess solder from a repair job that didn’t quite make it. After cleaning all of that off, four crushed data traces near the socket lug were found: 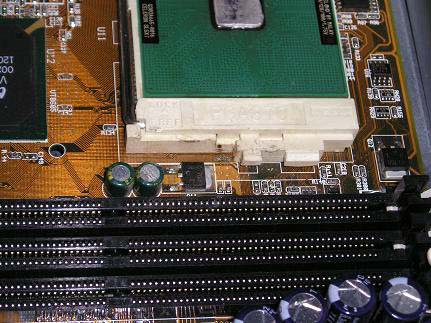 The picture above shows the overall area. Looking closely at the socket, you can see where the damage had been done: 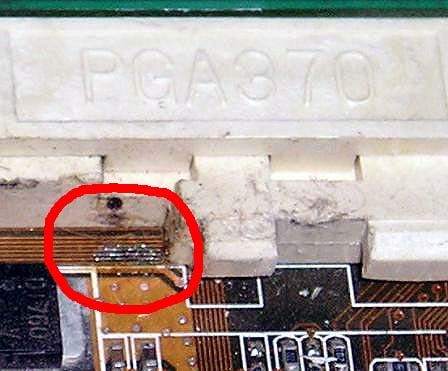 This shows the area up close after being repaired.

The area was far too small to just find any old wire and put it across, or to solder it directly. Using the same 13 gauge wire, which is very flexible, we took single strands from it and found that they would fit – just barely! Using a fine soldering iron tip that was further sharpened to a pin point on a grinder, along with the help of the microscope and VERY steady hands, we soldered the individual wires one at a time to the mainboard.

This happened to be the smallest soldering we had ever done. It’s not very often you solder data traces to fix them!!

Next, we wanted to test out the board to see if it worked, so we bought a Celeron 1000 CuMine chip off Ebay and a cheap Cooler Master heatsink. We installed it all in a case, took a breath before pressing the button…..and up comes the BIOS post!

Weeee!!! It worked perfectly and was fully stable. I eventually overclocked the chip to 1200 MHz – 120 x 10 at stock voltage.

Just keep in mind that even if you can resolder data traces, you still aren’t guaranteed that the board will work, as deeper traces could also be damaged. It’s worth a try though.

Just wanted you to know I enjoyed this article with trace repair on motherboards. I wanted to add some info, though, for users that do not want to solder anything, because it is really easy to do and much faster than the method Jason presented.

There is Copper Trace Repair Tape sold by many electronics supply houses (one example HERE under PURE COPPER CIRCUIT TAPE for $3.05). All you have to do to repair the trace is this:

Get an Xacto knife or box cutter. Scrape off the epoxy layer to expose the shiny bare copper on either side of the broken trace.

Scratch the exposed copper surface with some sand paper to roughen it up (or use the knife). Take some alcohol (isopropyl – rubbing alcohol) or acetone and a Q-tip to wash off the copper to prepare the surface for the contact adhesive on the copper repair tape. Cut a piece of the repair tape to fit over the exposed copper surface. Remove the backing from the adhesive side of the tape and place over the repair area. Now press it down with something (such as a pen cap) to make sure the tape is secure.

The tape has conductive fibers in the adhesive layer and will work well on repairs, as long as the surface is prepared correctly.

Here is another website as well some people may find useful, as it involves replacing the traces while soldering – it is very informative.

Hope this helps others who need to do their own repairs. Thanks.

Build Your Own Computer