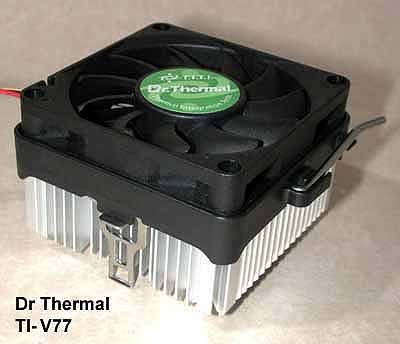 Dr Thermal was nice enough to send a sample of their Dr Thermal TI-V77 Socket A/370 heatsink. This is an aluminum radial fin/copper plug design. The base 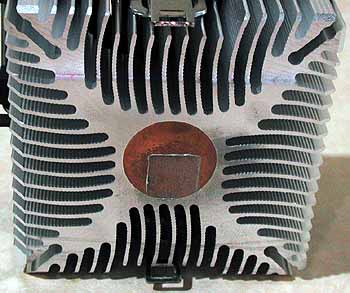 features a copper plug insert for increased cooling effectiveness. The base on the sample I had was not finished flush to the aluminum base – it was raised very slightly above it so that CPU contact with the surrounding aluminum base was not optimal, although only a small portion was not contacting the copper plug (this is characteristic of almost all Socket A/370 heatsinks using a symmetrical radial fin design).

Mounting is its best feature – with the lever in the “up” position, engage the retention base; then swing the clip closed and it’s firmly mounted – easy, simple, very effective and not a problem to mount in a crowded case.

In summary, a fairly conventional aluminum/copper plug heatsink with one of the easiest and secure socket mounting systems around.

The TI-V77 was first tested on the CPU Die Simulator which gives results that are unaffected by motherboard influences. I then tested it on an Iwill KK266+, modified to read AMD CPU die temps, as an example of what users might see on their systems.

Thanks again to Dr Thermal for sending this our way.

We have a GPU cooler here which has the “World’s First” moniker attached to its resumé, the Thermalright Shaman. The 8 heatpipes justify this moniker, and it has at least 2 more heatpipes than any other GPU air cooling solution out there. As time permitted over the past couple of weeks, I’ve used my GTX 460 1 GB to test the Shaman against Prolimatech’s MK-13 and eVGA’s “External Exhaust” stock cooler. Today, we take a closer look at the the heatsink itself and its performance. Read More