My son informed me that his BP6 was now “too noisy” and could I do something about it. The BP6 was cooled by dual Alpha 6035s on Celeron 366s running at 550 MHz. The Alphas were doing a nice job, but two YS Techs were putting out too many decibels. 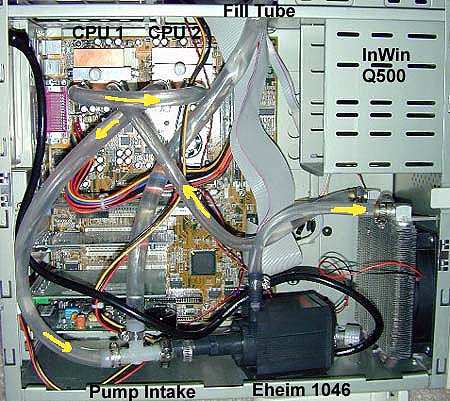 The best solution for quiet and effective cooling is water, so I ordered two Danger Den copper blocks and an EHEIM 1046 in-line water pump. I had a small radiator kicking around, a 120 mm fan and an InWin Q500, so I proceeded to assemble a dual water cooled system – the end result is pictured above. 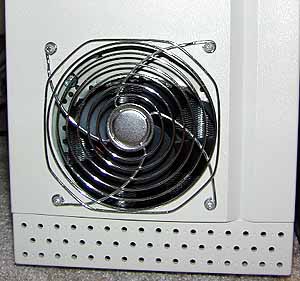 Per my usual practice, I cut out the front sheet metal on the case to mount the 120 mm fan. I then cut a nice 5″ hole in the plastic front and put a finger guard on it so the cat wouldn’t tangle with it. 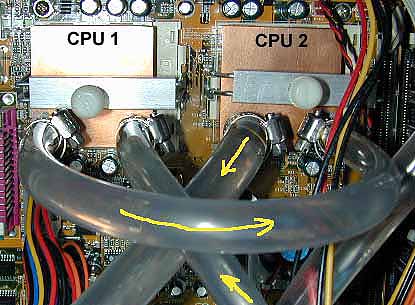 This picture shows how I routed the water through the blocks (follow the yellow arrows). I thought about using a nylon “T” so the cool water from the radiator would feed into each block at the same time and another “T” to scavenge the warm water back to the pump. After thinking about it, I decided it was way too complicated and that, given the light cooling load, routing the water from CPU 1 to CPU 2 and then to the EHEIM 1046 in-line water pump would be OK.

After we put it together, we ran the system and found that both CPUs did not get over the mid 90s F, so this simple “crossover” method did the job without any problems. 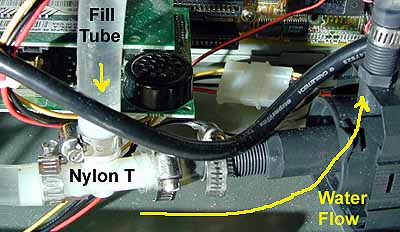 I want to point out how I avoid the air bubble problem some folks are having with in-line systems. What you see above is the nylon “T” that I use on the INTAKE side of the water pump. I use this to fill the system and, by running it, bleed any trapped air out through the “Fill Tube”. This beats what some do – submerge the system in a bathtub and fill it that way.

The drawback to not having a “Fill Tube” is that if air makes its way into the system over time, you have to disassemble the unit and do the bathtub routine again. With the “Fill Tube”, you can monitor water levels visually; as long as there is water in the tube (say about halfway up), the system is fully charged with water and no air.

Now some will look at this and figure that water will shoot out this tube; no way. By running this tube on the intake side, the pump’s suction is always pulling the water down towards the pump, so there is no problem.

When you first fill a system like this, leave one of the tubes on the water blocks loose so you can fill the system pretty full by gravity. Once you get close to the top, tighten the last clamp and pulse the pump on and off to get the water moving and “burp” air out of the system. Run it for about an hour and all the bubbles are out.

As always, test the blocks outside the case first before mounting them in the system, and run the pump without the system turned on for at least overnight to make sure all your connections are tight.

It is possible to use Intel’s Thermal Diode found on its chips to estimate heat sink efficiency. Heat sink efficiency, measured as Degrees in Centigrade / Watts (C/W), in this case is the temperature drop measured from the thermal diode