Very good performance but with lots of noise. –Joe 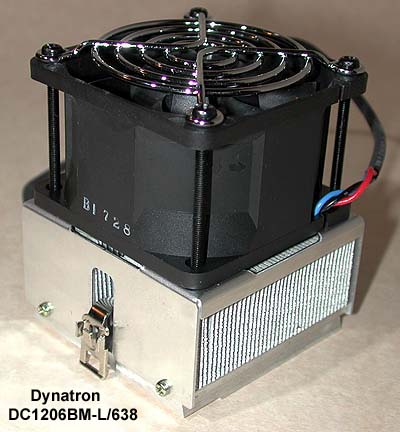 Dynatron was nice enough to send us a sample of the Dynatron DC1206BM-L/638 It’s an all aluminum unit with 40 fins. The heatsink has “skived fins”:

Note that the fins are lifted from the base.

This is a new technique that literally shaves fins from the base material. The advantage is that there is no mechanical bond, such as soldering, between the fins and the base – it’s all one piece – effectively eliminating any thermal degradation due to the bond used between the two. Compared to a heatsink that mechanically crimps fins into the base, skiving can show markedly better performance. This technique is also being used for copper heatsinks.

This pic is a composite shot showing both sides of the fins. One side is smooth and the other has a “pebbly” consistency. I am guessing that as the fin is lifted by a knife blade (smooth side), the side opposite the blade “crinkles” as it lifts off the base. A very interesting process! 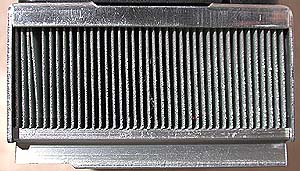 The side shot shows overall fin density – the shroud is screwed onto the base and is removable. 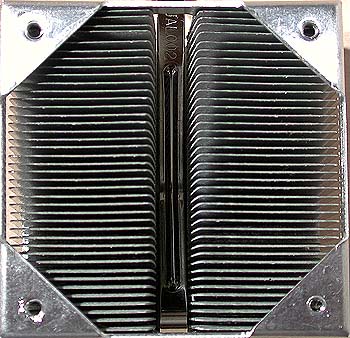 Looking down into it gives some idea of the “fan challenge” – the fan used for this heatsink must generate enough pressure to push air through the fins. I think this almost forces the use of a Delta 38 class or better fan. Unfortunately, this means that noise becomes an unwanted by-product.

I measured noise with a Radio Shack Sound Meter 8″ from the fan’s intake – the YS Tech @ 72, the Delta @ 77 dBA. The latter is REALLY objectionable, except maybe if you use it in a jet engine test facility. 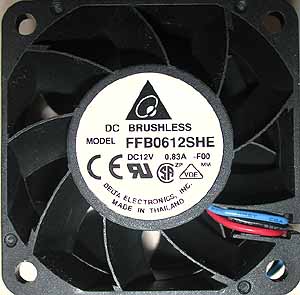 The 44 cfm Delta has vanes in the bottom which direct airflow such that it blows straight down into the heatsink; airflow from other fans will show a more radial pattern as air exits from the blades.

NOTE THAT YOU MUST USE A 3-4 PIN CONVERTER!

The Delta is rated at 0.83 amp per the label – this is 10 WATTS. Most motherboards support, at best, 5 watts. Running the Delta 44 on a motherboard fan header will most likely burn it out pretty quickly. 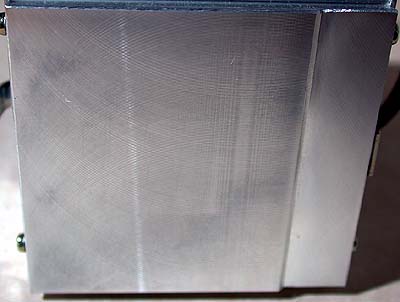 The bottom show definite machining marks, although these are very fine.

The clip is the “OEM” type – you must use a screwdriver to mount it on the socket.

I prepared the Dynatron by boring a hole completely through the base so I could epoxy a thermocouple above the CPU. The thermocouple is attached to an Omega HH23 Digital Thermometer. Ambient temps were measured with a thermocouple placed about 1 inch from the fan’s intake. I used Prime 95 to stress the CPU on an Iwill KK266, BD133U (MBM temps are on-die) and Abit KT7. Arctic Silver grease was used in all tests. CPU Case Temp is the temp at that point where the CPU contacts the heatsink.

While the 44 cfm Delta turns in better C/Ws, whether the increase is worth substantially more noise is up to each consumer to decide. I think the Delta 38/clones are intolerable (as do many who toss them shortly after using them), so purchasing the Delta 44 cfm unit is without at least a rheostat is not recommended (IMHO).

The Dynatron turns in some nice C/Ws – high fan noise is the dominant issue that purchasers should consider. If you can live with it, it’s not a bad price/performance buy.