SUMMARY: A very nice solution for 1U cooling. 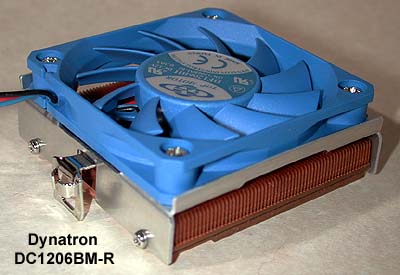 The good guys at Dynatron sent a sample of their 1U cooler, model #DC1206BM-R. 1U cooling requires a heatsink of limited height (for rack mounts) – considering what we are used to, this heatsink looks like it’s been squashed. The 1U cooling challenge is pretty severe, and the Dynatron looks like a good approach considering packaging limitations.

This is an all-copper, skived heatsink featuring 60 fins – about the highest fin density possible without a very aggressive fan. Skiving is a technique that shaves the fins from the base so there is no solder joint between the base and fins. This technique packs a lot of surface area into a small footprint, so it could be a good 1U cooling solution. 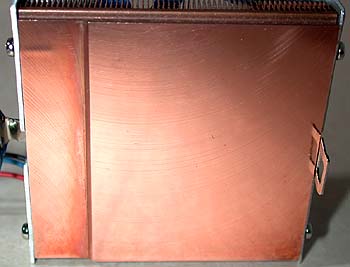 The base is very nicely done – there are very fine polishing marks but the base feels smooth to the touch.

The clip I did not like – it is the typical “OEM” type that requires a screwdriver to mount onto the socket. I found that, when using a flat blade screwdriver, it interfered with the socket lug, making mounting very difficult. I had better luck using a Philips head instead. Considering that frequent changes are not likely for this heatsink, it’s OK but still an annoyance.

Dynatron specs this heatsink for Socket A CPUs up to 1.3 GHz and Intel Socket 370s up to 1.26 GHz. I tested it on both the CPU Die Simulator, which gives results that are unaffected by motherboard influences, and an XP 1600 on the ASUS A7V266E. Ambient temps were measured with a thermocouple placed about 1 inch from the fan’s intake. I used Prime 95 to stress the CPU and Arctic Silver grease was used in all tests.

Considering its diminutive size, the Dynatron does a credible cooling job – actually surprised me. While I’m not comfortable with temps at this level, there were no problems running the XP 1600 with this heatsink. Note, however, that ambient temps were just that – case temps in excess of ambient will add to the cooling burden, so good case (or rack) airflow is important.

The Dynatron DC1206BM-R does a very nice job – its performance is comparable to some heatsinks much larger. While I don’t get a lot of 1U heatsinks to test out, this one is worth serious consideration.

Thanks again to Dynatron for sending this our way.

¹I am not convinced that this implementation is accurate for heatsink testing – more experience is required on this. I’ve included the ASUS results as indicative of performance on it only.

The next stop on our CES 2020 tour is with Alphacool who had some new enterprise cooling solutions as well as a lot for us, the general consumer. Read More

A classic heatsink design marred by a less than stellar base finish. — Joe
Read More