SUMMARY: An interesting design for 1U cooling. 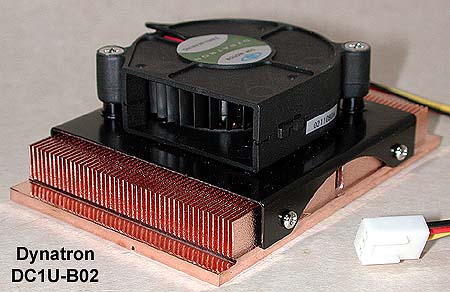 The good guys at Dynatron were nice enough to send a sample of their 1U heatsink, model # DC1U-B02 to test out. In contrast to most heatsinks, this one features a blower rather than an axial fan. The heatsink is a copper skive design, which means that the fins are literally peeled out of the copper base – there are no solder joints with this technique. 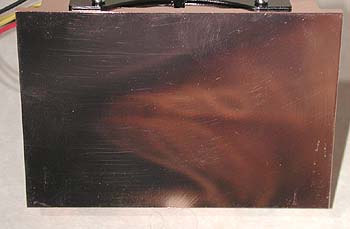 I found that when running a fingernail over it, you could feel and hear the polishing marks on its copper base.

The mounting bracket is a good one: 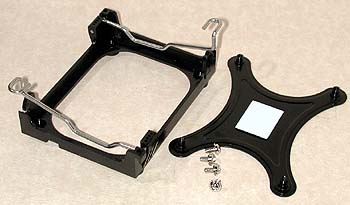 Mounting requires removal of the motherboard; the back plate is held in place with four screws. Once in place, the system is very secure and clipping the heatsink in place is very easy.

Cooling in the restricted space of a 1U rack is a challenge, and one that will be increasingly difficult as CPUs increase in power. Heatsinks for 1U cooling are among the most difficult to design, considering the limited footprint available.

Considering its diminutive size, the Dynatron DC1U-B02 does OK, but it is noisy – maybe OK in server racks.

Thanks again to Dynatron for sending this our way – an interesting approach to 1U cooling.

Adapting a soda can to watercooling — Jon Fettig

UPDATE 8/25/00: A lot of people want to know details on my water pump. I purchased a Rio 180 at Reef Fanatic and it’s 120gph. To mount the water block I’m using zip ties and 2 metal thingies I made