SUMMARY: Impressive performance, only if noise is not an issue.

The good guys at Dynatron sent over a sample of their latest copper cooler (DY1206BH-638): 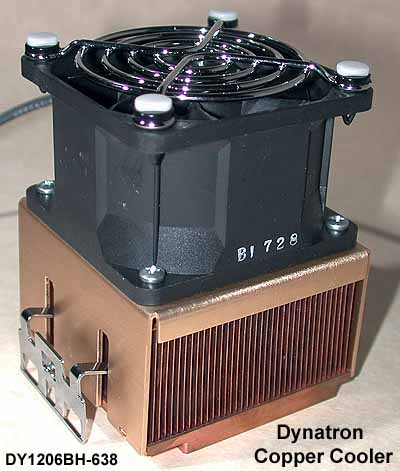 One of the notable features is the use of a three prong clip – this is about the most secure mounting you will find for attaching to a socket’s lugs. Unfortunately, it also requires that you use a screwdriver, so it’s sort of the best and worst of “clipdom”.

Another notable feature is the very large, noisy, 60 mm fan from TOP Motor: 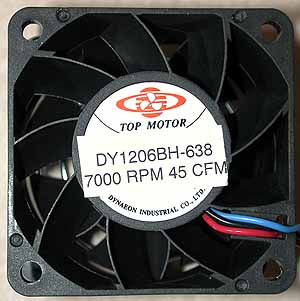 Dynatron specs it at 7000 rpm, 45 cfm. I measured fan noise 8″ from the fan intake using a Radio Shack sound meter and recorded 75 dBA – this is about 5 dBA louder than the Delta 38. Note that the Top fan has vanes in the base so that airflow is directed down into the heatsink; fans without vanes exit air in more of a cone shaped pattern. The intention is to get as much air as possible directed down into the fan base.

The base is very smooth with no discernible machining marks: 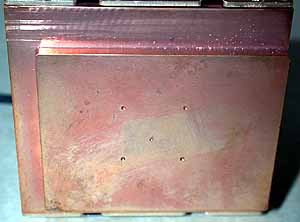 The four dimples are by Dynatron; the small dimple in the middle is a where I will drill the hole for a thermocouple; this was marked after I mounted it on a motherboard to determine the center of the CPU. 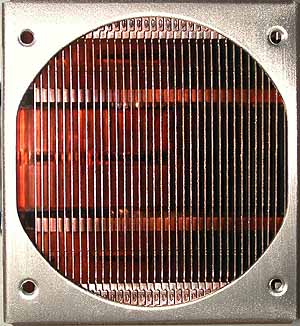 The fins appear to be crimped to the heatsink’s base.

Looking down into the heatsink, you can see that it’s very clean and unobstructed for airflow. Exit air from the Dynatron was relatively strong, attesting to the aggressive fan and clean fin design. At 99 watts, exit air was on the warm side.

I prepared the Dynatron by boring a hole completely through the base so I could epoxy a thermocouple above the CPU. The thermocouple is attached to an Omega HH23 Digital Thermometer. Ambient temps were measured with a thermocouple placed about 1 inch from the fan’s intake. I used Prime 95 to stress the CPU on an Iwill KK266+, BD133 (MBM temps are on-die) and Abit KT7. Arctic Silver grease was used in all tests. CPU Case Temp is the temp at that point where the CPU contacts the heatsink, CPU Back Temps are measured by a thermocouple on the center back of the CPU.

in addition to the Top Motor fan, I used a Delta 38 in one test to see how much of a difference the Top fan makes – this test is indicated in the table. I removed the Top fan with the heatsink on the motherboard and mounted the Delta 38, so there is no discrepancy between the two due to remounting.

The Dynatron typifies what is going on in heatsink design:

LOTS of airflow, LOTS of surface area and COPPER material. Within the constraints bounded by economics and physics, by and large, superior cooling performance means noisy fans. There ain’t no such thing as a free lunch.

The tested C/Ws place the Dynatron at the top rank of air cooled heatsinks. For aggressive cooling of Socket A CPUs, the Dynatron is very competitive, but the noise/performance tradeoff is one that each user must confront.

I expect to see more heatsinks delivering C/Ws below 0.25, but mostly with significant noise penalties. Expect to see attempts to use 80 mm (maybe 92mm?) fans as one means to reduce noise, although fan tip speeds will mitigate noise reductions.

Thanks again to Dynatron for sending this our way; Dynatron is open to new distribution, so drop them a line if interested.

SUMMARY: A quieter fan results in slightly lower performance – still the “Heatsink to Beat”. Swiftech was kind enough to send us a sample of their latest MC462-A. The differences between the original MC 462-A and this version fall into