Three chances to win one of these enclosures – see Contest Rules below! Note: This Contest is over. 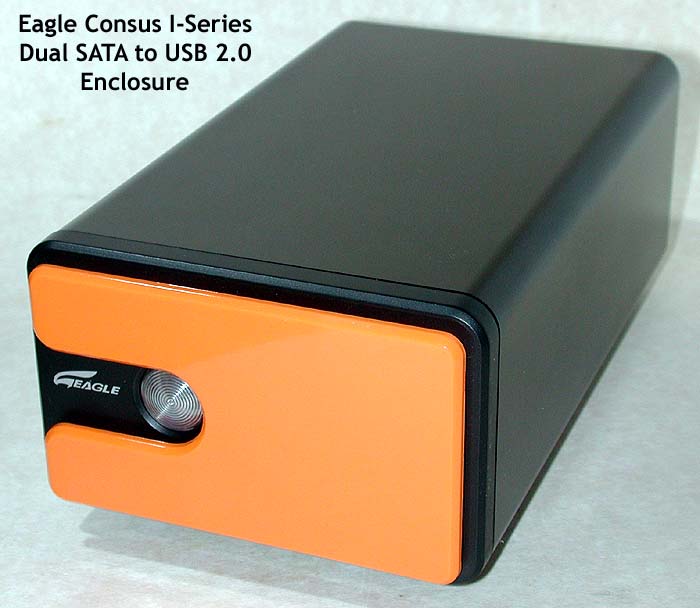 The good guys at Eagle Tech Computers were nice enough to send a sample of their Eagle Consus I-Series External Dual SATA Enclosure. This enclosure is different from many others in that it can hold two drives and in addition combine the two into one virtual drive.

The interesting feature of this enclosure is the ability to combine hard drives using JBOD (“Just a Bunch Of Disks”). This allows two or more physical drives (can be of unequal size) to create one logical drive. Disks are chained together, end to beginning, so they appear as a single large disk. JBOD is similar to RAID but it is NOT a RAID function – the drives are not striped. JBOD is done automatically when a second drive is added to the enclosure.

The back shows the USB and power ports and the button used to actuate the back-up function: 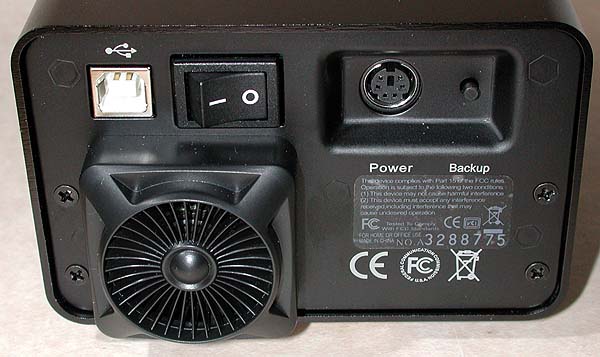 The orange faceplate is easily removable – just pulls out for the “industrial” look: 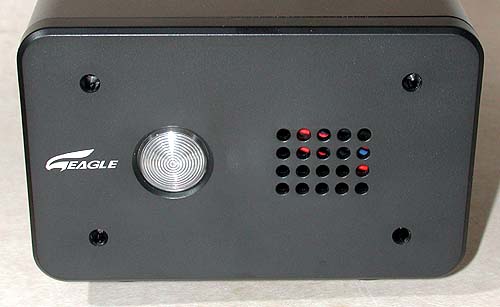 Don’t like the orange faceplate? It comes with a second, more sedate gray faceplate: 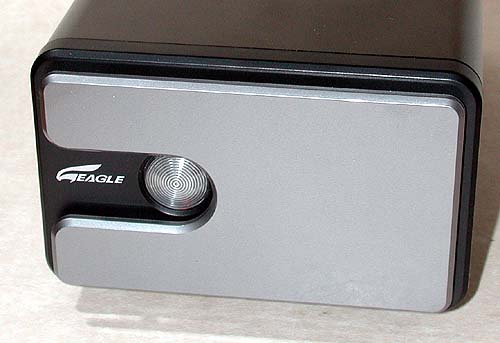 Remove four small screws from the bottom and the carrier slides out of the enclosure: 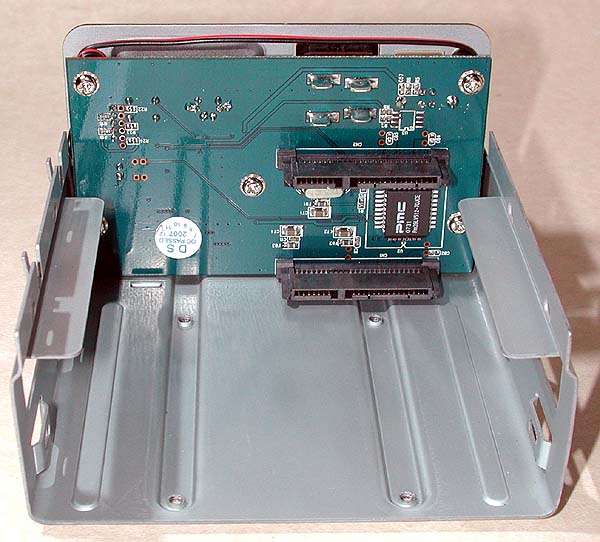 There is a small cable attached to the enclosure for the LED – it plugs into the carrier as shown below: 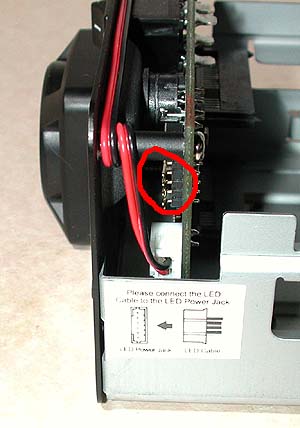 Parts that ship with the enclosure include the power supply, USB cable, screws, Manual and software CD: 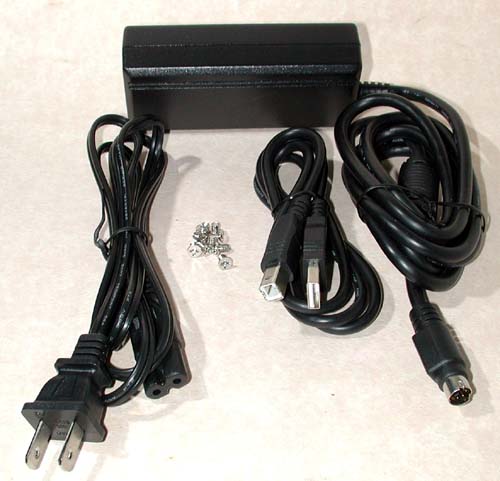 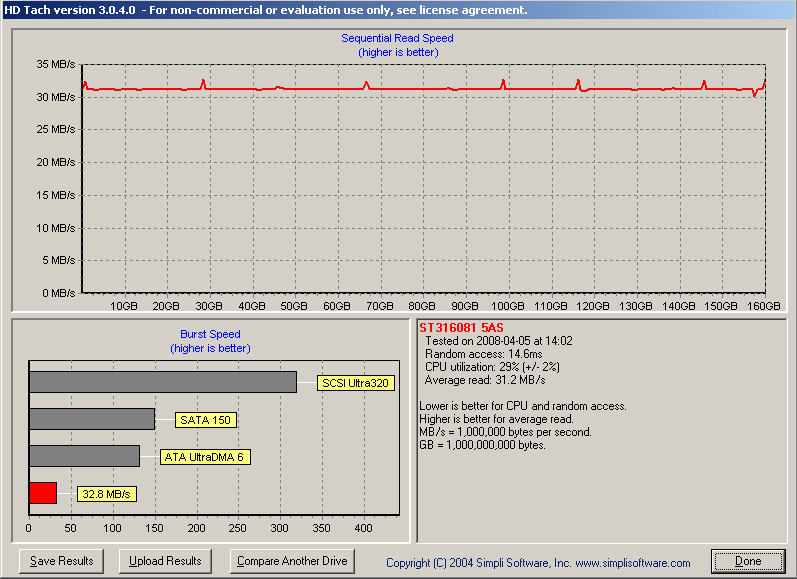 Included with Eagle’s Consus is software to enable the “One-Touch” file backup function. This is a “lite” version of Fnet’s PCClone Ex – this software enables file backups, not total system backups.

After installation, a PCClone icon is installed on the desktop and system tray – click on it, or hit the “one-touch” button on the enclosure, and this screen comes up: 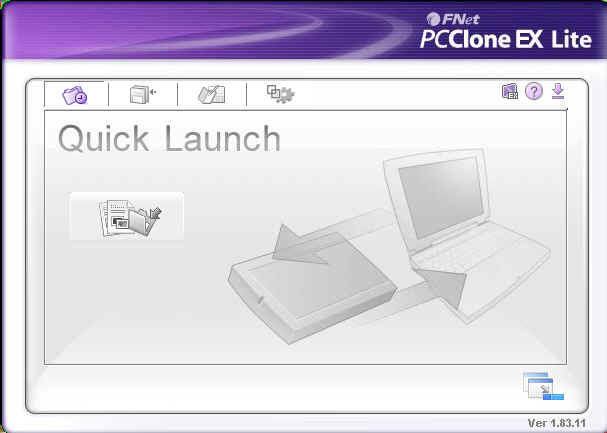 Click on the “Quick Launch” icon and this comes up: 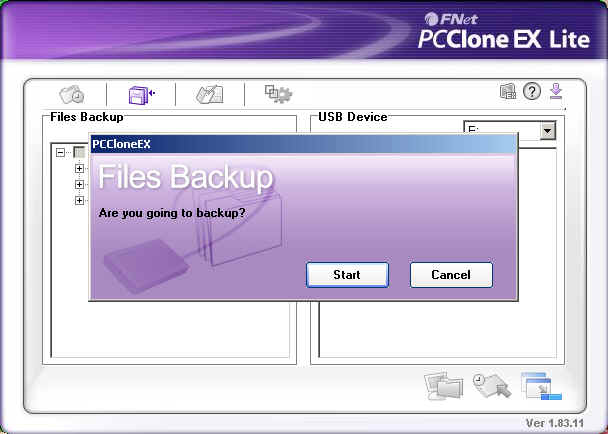 Hit the “Start” button and it proceeds to backup files: 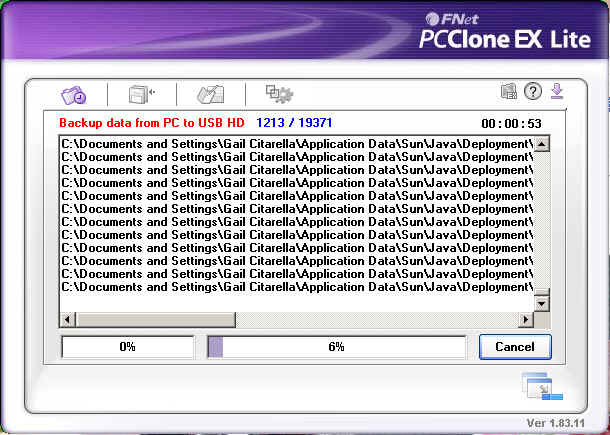 Obviously how long it takes depends on how much you have – my wife’s laptop took about 20 minutes for 7.5 GB worth of files. It also generates a text file that lists some items not backed up, but not all. Clicking on the second menu icon brings up this: 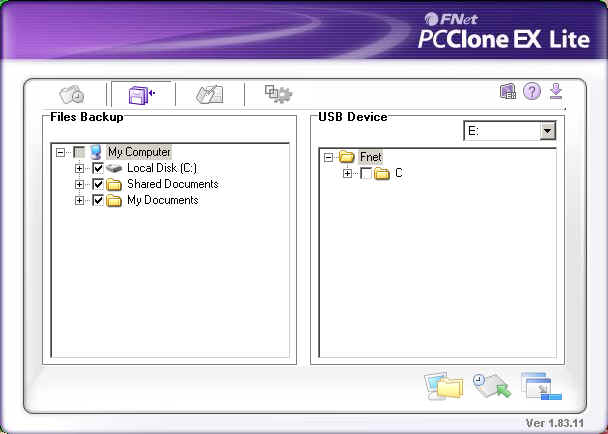 The third menu icon brings up a somewhat confusing screen: 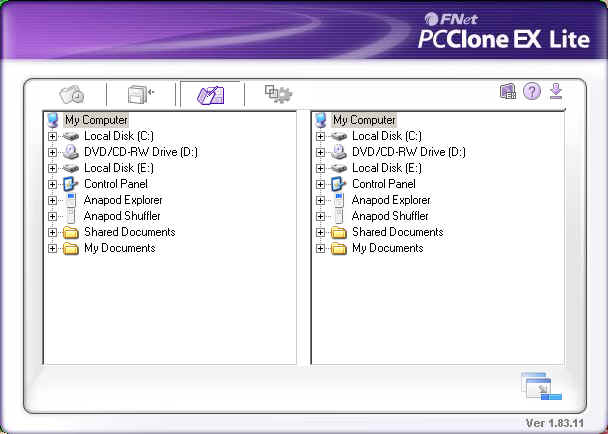 You figure out that the left side is your PC and the right side is the external drive. Finally there is a “Help” function: 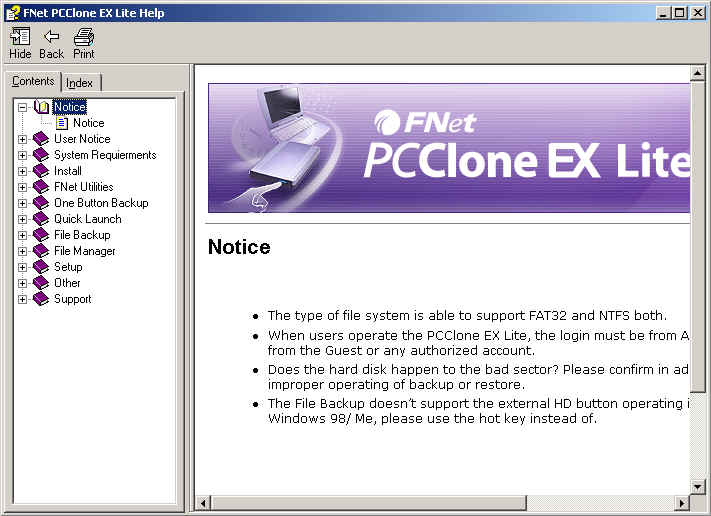 Adequate enough to figure out what’s going on – the last two screens are “drag and drop”, so you can select whichever file you either want to backup or restore. Overall a handy software package.

A very versatile hard drive enclosure that holds two drives. Add the JBOD capability and the back-up software and you have a convenient and potentially large storage solution.

Thanks again to Eagle Tech Computers for sending this our way.

Three respondents, drawn at random, will each win one of these enclosures – the rules are simple:

I am curious as to what you use external hard drive enclosures for – casual storage, on-line all the time, portable file transfers, etc. Also, what is the “killer feature” that would make one enclosure stand out against the others. Just Email Joe with your response – no right or wrong answers!

Jim, Steve and Steve J won an EagleTech HD Enclosure – many thanks to all who responded!

The following responses were typical of many received and I found the “killer features” interesting to share:

The killer features I always look for are compatibility and durability.
This would be for a different use, but the ability to completely ghost
another drive that has an operating system on it would also be very cool.
This could be a simple man’s “RAID”…..if your main pc goes down for an
unknown reason, you could just plug in the backup drive and be as ready to
go as your last ghost backup date.

So the use I would use it for is backup. This makes reliability important. So a killer feature would be a dual enclosure like the one shown with RAID 1 capability. If I could have backups at the touch of a button with redundancy that would be great. Also a gigabit connection instead of usb would be a bonus since it would allow backing up to the box from multiple computers without the need to move the physical box would be an added plus.

The killer features for an external enclosure would be one that could power itself off the port it plugs into (ie no wall ports), very low latency (probably only achievable with eSATA and possibly firewire), higher transfer rates than the drive enclosed, instant startup time to use in whatever OS I am on, and having all port combinations for compatibility incase I have to run the drive on a computer with only USB 2 access. I think the most important of these is having a device with USB 2, Firewire, and eSATA is the biggest feature since most issues are related to what interface the drive is on. A “wishlist” feature would be to have a drive that could automatically compress and backup to an optical format for off-site data backup/archival.

The one ‘killer app’ for me would be a single OS install on a portable
drive that I could boot to with different PCs in multiple locations. Even
having something like an XP user account that I could boot to on any PC
with XP installed would be enough, as long as I could take my installed
programs with me. It would be worth spending extra money to avoid the time
spent configuring Windows or Photoshop every time I sit down at a PC I
haven’t used before.

The ‘killer feature’ would be a combination of a RAID 5 array and 4
hard drive capability.

I would like to see an enclosure with an integrated power supply and carrying case.

If I could add a wishlist too, I would say having decent active cooling.

I want it to be network capable, and ideally have a eSATA and even more importantly a Gigabit ethernet connection, for a reasonable price.

(1) Universal power supply. Since this is the single biggest point of failure, being able to cheaply and easily replace the power supply would gain huge kudos.
(2) eSATA support in addition to the universal USB 2. eSATA is fast enough for active use and not just backups. Plus, reading off 500GB at USB 2 speeds is painful.
(3) Fanless. Fanless = one less point of failure. However, “better-than-sufficient” cooling must accompany a fanless design to make it worth my look. Fanless is nice unless your harddrive runs too hot.
(4) Stackable. Keeps everything orderly and less likely to fall off the desk.
(5) Compact design – must be flat! No stupid curvy non-stacking designs. I don’t care about the material – the important thing is sufficient cooling & stackable!

My killer feature would be automated/scheduled backups
that do diff’s so that only a relatively small amount
of data has to be backed up after the first time.

Killer features: I’d love to see a good external drive enclosure with 802.11b/g/n support (so that a direct connection isn’t required and I can put it anywhere), along with basic media playing abilities. This would make a killer lightweight media center. Such things already exist, but they’re either too feature-rich and expensive, only take laptop drives (when a desktop drive would do well), or aren’t networked. I’d love to see an enclosure with basic media player and WiFi for around $100. (And a remote would be nice.)

Manufacturers Take note! The buying public speaks up, so the ball is in your court.

We received a 256Mb stick of Kingmax PC133 CAS2 from Crazy PC. We put it against the long-time champion, Crucial PC2100. We tested the RAM as usual with a PCI card from Ultra-X Inc. called RST Pro PCI. This card

Part 1: Overclocking Important: I don’t really know what influences this and why this is happening. This is in my PC, but this doesn’t mean that it will be in yours too. If you have more info about this, please