The following reader Tips can get your AMD (or any CPU) substantially cooler with very little effort and expense; remember that adding a silver or copper base necessitates adjustment to the heatsink clip:

I’ve seen this question time and again on boards and overclocker sites.  ‘What’s the best metal for a heatsink/coldplate, aluminum or copper?’


I love the outrageous experiments (liquid nitrogen, freezing oil baths, etc.) fellow overclockers whip up in search of bonus megahertz, especially when they actually work.  But sometimes it helps to get out the old engineering books and do a little research.


Here’s a great periodic table done up by webelements.com that indicates the relative thermal conductivity of the metals.  This is their chart, so give them credit. 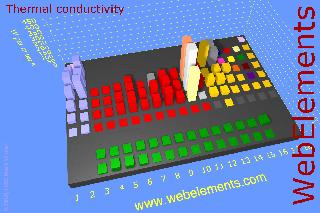 Now if you remember your periodic table from chemistry, you know that those three high bars near the middle represent metals with lots of free electrons.  This is good for electrical conductivity as well as thermal conductivity.  The orange one is the lightest – a really good thermal conductor, copper.  Just below it is silver, which also happens to be the best conductor period.  Below that is gold, not as conductive, but very corrosion resistant.

‘Where’s aluminum?’, you ask?  Look two elements to the right of copper.  See the yellow bar over there, kind of hiding?  It’s not as impressive when seen next to the others.  So why does everyone make heatsinks out of it?  Cost, of course.  Aluminum is a plentiful element found in rocks everywhere.  Copper is rarer, but widely available and still cheap.  Silver and gold are much harder to find.

Just compare the prices.  CVD (Chemical Vapor Deposition) diamond is a synthetic diamond polycrystal that is being developed for numerous high tech applications like laser diode heat spreaders.  It is still too expensive to use for CPU heatsinks at this time.   Natural diamond has an even higher thermal conductivity; the best of all known materials and up to 10 times better than copper.  Since only the metals are affordable, let’s look at them.

So  there it is.  If we only care about performance, silver is the winner.  If it’s all about cost, aluminum is the choice.  The best price/performance is clearly copper, but it’s a bit harder to work into useful shapes.


Now, I recently upgraded to flip-chip cpus and guys, we have a problem here.  It’s that small surface area of the new chips.  All of the CPU’s heat has to be removed out of that tiny region with very little heat rise allowed.  We need a material that can really conduct the heat away from the CPU and spread it out into our aluminum heatsink or watercooling block.


That’s where a faux Silver ‘Eagle’ can help.   It’s not a currency coin, but  it looks a bit like one.  I guess they are used mostly by people that trust precious metals instead of banks.  Why this instead of copper?  I saw these 1.5″ diameter pure silver coins in a local shop for $5, and since silver is soft, it can be sanded and flattened quickly.  They aren’t as thick as I would like (need to do the thermal analysis for optimum thickness) but they’re pretty beefy. 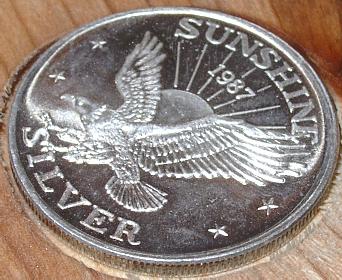 Time to get to it.  To help hold the coin while wet sanding, I routed out a depression in a wood block. This isn’t essential, but makes it easier.  First 120 grit wet-or-dry.  Of course I used gloves and water to prevent dust contact and dust inhalation.  Silver  compounds are known to be toxic to lower life forms. 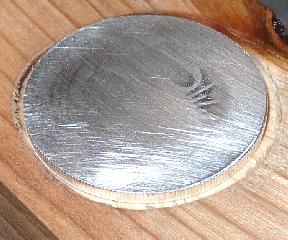 Follow with 400 grit or finer when all surface features are gone.  It took about 5 minutes to get this on each side. 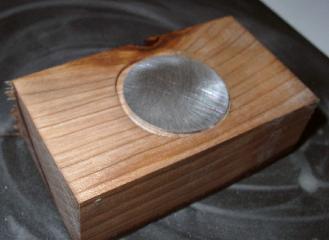 Here’s the test heatsink, a basic socket 370 cooler from a Celeron machine.  Artic Silver has a good consistency and very fine texture – highly recommended.   Be extra, extra careful with the CPU die.  Silicon is very much like glass and it can scratch, chip and shatter with modest pressure and little warning.  The old Golden Orbs with the twist-on mount system really risk your CPU –  it’s like putting a lightbulb in with vice grips. 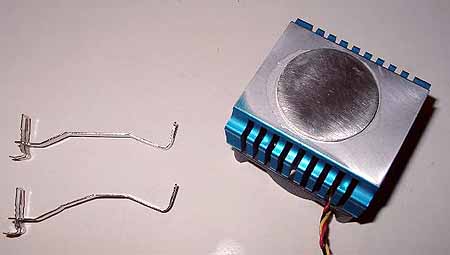 Note the clip has been bent to provide pressure right on top of the CPU die.  Rocking the mounted heatsink very gently will indicate when you achieve centered pressure.  Newer heatsinks should have this.  You might check yours.


Does it work?  I tested with a PIII running at 850 using the above heatsink and found a several degree reduction in CPU die temp under full load versus without.  It also should prevent heat concentration and temperature rise in the center of the heatsink during maximum heat output.  The subjective conclusion – the system is more stable than with a G-Orb.


How about a real torture test!


Overclocked Tbird.  Air cooled.  With a Celeron heatsink.
Are you crazy??


At 1100, the CPU produces up to 55.1 Watts  spread over a 117 square mm area according to the AMD doc.  They also state the die temperature must not exceed 90 C.  They assume a worst case ambient air temp of 45 C.  They also recommend a clip force of 12 to 24 pounds.  There’s lots of other good stuff in the AMD doc.  If you’re playing with heatsink designs, it a must read.  Note that the silver heat spreader does not extend out to the compliant pads.  I’m not sure I trust those things yet –  don’t want to pull a Kyle.


Anyway,  the spreader with heatsink does the job.  But I do wish AMD had on die thermal monitoring. 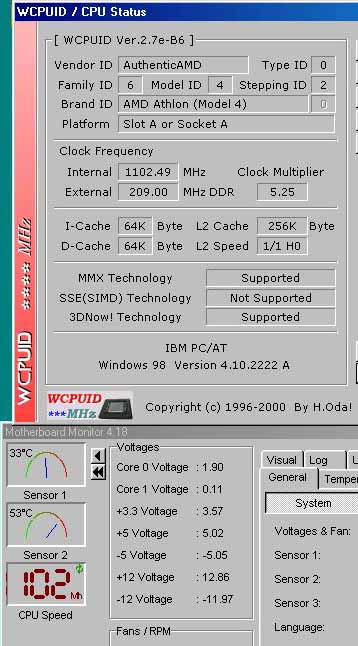 Now I’ll be the first to admit that the heatsink temp of 53 C is a little more than I’m used to.  The die is going to be even hotter.  Still, the CPU is running within spec.  Well, within thermal spec anyway 😉    But I definitely want a larger heatsink to bring down the temperature to a more comfortable level.


Or maybe…  a solid silver heatsink?


Overclocker’s code of ethics:  I am overclocking and otherwise modifying my equipment for personal satisfaction and release the manufacturer from lifetime and performance warranties that would otherwise apply.  If I destroy my CPU, it’s my responsibility and I’ll buy another one.

Just thought I’d let you know that I was able to drop my PIII core temp (as measured by the thermal diode on my Asus P3V4X) 8 degrees Celsius by simply sandwiching a flat piece of copper between the die and home-modified HSF.

I stopped at the hardware store yesterday after reading the article on your site describing how copper conducts heat better than aluminum, but aluminum transfers this heat to air better than copper. I picked up a sheet of copper stock (sorry, I don’t have the thickness, but it was less than .050″) and cut a strip with a Dremel (to keep it flat) to fit between the posts of the HSF, and long enough to spread to the width of the heatsink (just like the Alphas).

I “bonded” this copper strip to the HSF with some thermal grease – spread lightly but evenly – and moved the copper in a circular motion while pressing really hard. I then clamped the assembly to the CPU and let ‘er rip.

Running [email protected] used to keep the temp at about 59 Celsius (given a 28 degree room temp) – now it averages 51. This may be hot for some people, but Intel’s maximum is in the 80s (Celsius), so I’m happy.

BTW – Now that I know this is a successful mod, I will more securely fasten the copper to the HS (epoxy or bolts, not sure yet).

[ed note: I think Thermal Epoxy would be best – regular epoxy may separate due to heat stress – I am going to try this also and report on it – Joe]

Over all, I have to agree with you on the aluminum heatsink issue. I’ve been working on a “hybrid” idea – Copper base w/ aluminum pins. The biggest hassle is drilling the base – 132 pins + 2 holes for the clips. As far as a drill bit – I suggest that a Titanium coated bit seems to work the best; I only broke 2 of those versus 5 of the hardened steel.

Reason for the aluminum pins: While copper absorbs heat better, it doesn’t dissipate the heat faster. This is why (if you look at automotive radiators) you’ll notice that an aluminum radiator is about 1/2 as thick as a copper one. I think by using a copper base and aluminum pins I can get the “best of both worlds”.

About the only thing I have not decided yet is whether or not I should shroud the HS, or just try it straight up – We’ll let you know how it works.