I must admit from the outset that I am using an Enermax fan. I once bought a collection of returned merchandise – all fans – that included an undamaged Everest and a Cluster that would not spin. The blade assembly of the latter was badly contorted. Given that these are Enermax fans with Twister bearings, I popped the blades off the two fans and put the Everest’s blade assembly on the Cluster motor. Guess what? It worked perfectly! I now had a PWM fan during a time when PWM fans were not as common as now, and the blades are a lovely translucent white. I named it my FrankenFan, and now it is one of the fans on my rig. The lesson? The Enermax Twister bearings really do work as advertised, and incidentally allow you to swap blade assemblies. Every Enermax fan I can find has a Twister bearing, including the three I am reviewing today.

All three fans come in clear plastic outer boxes with cardboard inner displays. The backs give you features and specifications.

Enermax does ship their fans with accessories. All three ship with Molex to 4-pin (PWM) adapters. All come with double-ended vibration isolators. These are good when you need to put the fan in a confined space inside a case. You put one end of each mount in the four screw holes at the corners of the fan frame (put in the end with the wider gap between the disk and the shoulder). Then you put the fan up against the case wall and pull the tips through the screw holes in the case. This saves a lot of time and effort.

The T.B. Vegas Quad has a little push-button appliance on the end of a wire that allows you to semi-remotely cycle through the six LED modes. The Cluster and Everest have On-Off LED switches on short leads.

On the exhaust side of the fans is the Smart APS (Adjustable Peak Speed) control that provides three ranges of rpm options. In the T.B.Vegas Quad and the Enermax Cluster Advance, the speed inside each range responds to pulse width modulation (PWM). The Enermax Everest Advance speed responds to temperature. By using the switch to set the maximum speed of the fan, you control the noise. It’s like getting three fans when you buy one.

For an additional treat, the airflow measures were repeated with a screen filter covering the fan, to give you an idea of what each fan can do while drawing through a filter.

In the graphics below, the labels of each line show the fan model, the APS setting, the speed in free air (FRPM), test box with unobstructed outflow (RPM0), and test box with anemometer engaged (RPM).

In the chart section, the results are displayed below as if they were obtained together: Sound Pressure Level (SPL) in blue, Airflow (CFM) in peach. Bear in mind though, that the measurements of free air speed (FRPM) and sound pressure levels (SPL) were taken separately from the speed (RPM0 & RPM) and output (CFM) in the airflow box.

Note that the “500” nominal speed indicates the RPM each fan is supposed to attain at zero PWM duty. So this was tested both as “500” and as “0%” PWM duty. 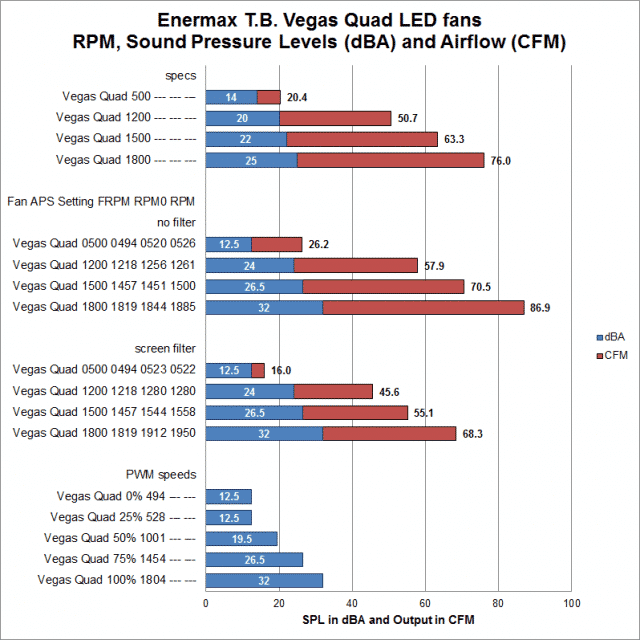 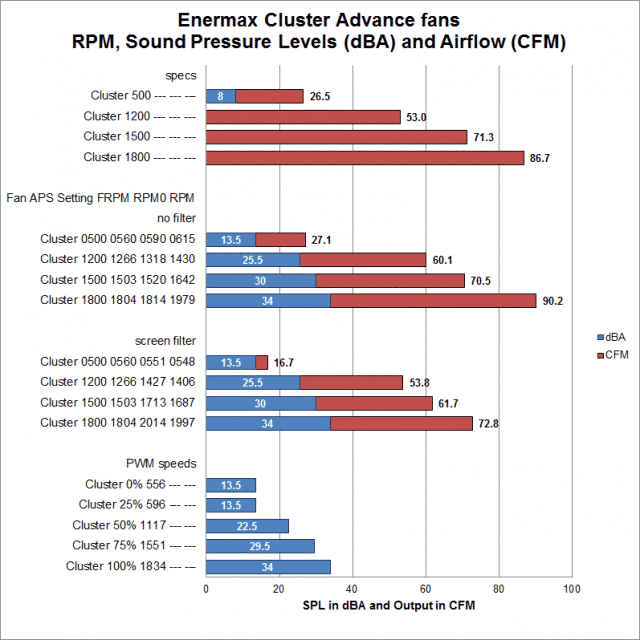 It’s always nice when a company delivers on its promises. These fans appear to have accurate specifications. The PWM on the T.B. Vegas Quad and the Cluster Advance clicked quietly at low speeds, but the noise faded above 1000 RPM. Both fans produced a tone and the noise of air rushing as they approached 1500 RPM.

Now, to get to the thermally controlled Everest Advance fan. I tested this fan with its thermometer exposed to three temperatures: room air (23°C), my body temperature (37°C), and with my heat gun blowing hot air on it (unknown temp but quite hot). The results:

Since the Everest has the same blade assembly as the Cluster, it makes the same noise at the same speed.

The T.B. Vegas Quad fan has four LED colors in 12 groups, for a total of 48 colors. With these 48 LED colors, they achieve some interesting effects. The LEDs in the T.B. Vegas Quad have six modes: All-On, Sparkle, Propeller (2-bladed), Triple Propeller, Vegas (the first four modes cycling), and Off. I have captured some of the fun in the pictures below. What you can’t see in the still shots is that the propellers move. The Sparkle effect is like a shadow fan running opposite the visible curve of the LEDs reflected in the blades, and the brightness cycles up and down.

In the last picture you can see that the effects are assisted by blades that are reflectors on only half their chords. This is definitely a fun fan.

These are well-built fans that match their specs. Where these fans differ from their predecessors is in their three-way selectors — the APS switches that govern their peak speeds essentially give you three fans in one. The Cluster Advance and the T.B. Vegas Quad fans are PWM to boot, which really adds to your being able to control them. You might or might not hear their quiet clicking at low speeds, but Noctua and Cooler Master have produced PWM circuits that don’t make their fans click, so the rest of the industry will likely follow suit. So we should expect a further advance on these fans. In the meantime, the clicking is quiet enough that I can’t hear the FrankenFan in my own rig. That tells me the PWM circuits are quiet enough for me. Also, when you are not using the PWM function, none of these fans click at all.

Enermax has been towards the top of the power supply manufacturer heap for quite a while, they were one of the first brands to push into the high power (for the time) and high efficiency (for the time) arena that we all take for granted now. Today’s unit is much higher wattage and much higher efficiency than those past units of course, but you can smell the history. Or possibly the solder fumes. In any case, let’s see how the MAXREVO performs!

Marking the debut of their 120 mm fan, Thermaltake released the Riing Silent 12 Pro. This cooler has been out for a few years but we’re getting the opportunity to test it here today to see how well it stacks up. Coolers based on a 120 mm design typically need faster fans to improve their cooling capacity which in turn creates more noise. We’ll put this cooler to the test here and see if there’s a trade-off between cooling performance and audible noise and if that “Silent” in Thermaltake Riing Silent 12 Pro is justified.

It wouldn’t be Vegas without some bright lights! Enermax and LEPA did not disappoint in that respect with tons of RGB fans, cases and coolers that made us feel like we were walking along the Las Vegas Strip rather than in a ballroom.

In July, 2013, Enermax announced that they had updated their fans with new three-position "APS" switches, which allow a user to select one of three peak speeds. This, in essence, allows you to buy three fans in one. Today we will be looking at three of these fans: the T.B. Vegas Quad, the Cluster Advance, and the Everest Advance. Are these truly advanced fans? Are we really looking at nine fans masquerading as three? Let?s see.