A look at a popular power supply. – Jay

First, I would like to say sorry about the PICs…
I only have a BAD web cam (donations for a digital camera are welcome)

Second, I would like to say I was rather impressed when I first opened the box – well packaged, looked nice – just hoped it would perform. 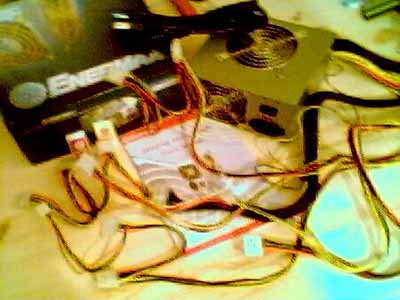 This is everything out of the box.

What this pic is trying to show is what comes with the power supply is:

So what we have here is a P4 ready, AMD approved PSU
(*note* to get AMD approved you need a DUAL fan system in your PSU).

Noise is not an issue with this PSU at all. A 5400 RPM harddrive will drown out the noise – you can not hear the PSU and its dual fans at all. The fan speed of the PSU is affected by the temps in the PSU; as temps increase, so do the fan’s RPMs. At 20C, the fan runs at only 38% of its max speed, rising with temps until the fan reaches maximum speed at 75C (do I see a mod to increase fan speed, thus better case cooling, or what?).

Then next point you may love or hate:

The length of the cables on this PSU put cheap PSU’s to shame.
You will not have any troubles reaching ANYTHING in your case, and I MEAN ANYTHING!

Personally I love this! 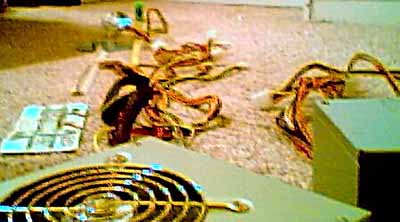 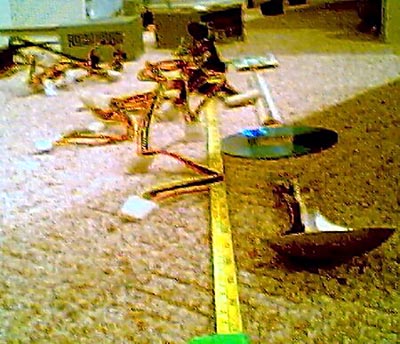 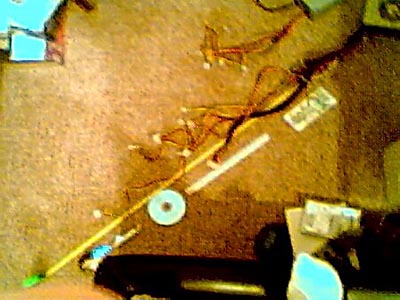 The end of the tape measure is 126cm, how far the furthest Molex Connector Stretched.
Also, a Canadian $20, ruler stick (30cm, 12inches), CD, and a BIG SPOON to give an idea how long this thing really is. (I still think I should have added more stuff)

Also is an AT PSU for comparison (sorry no ATX – gave my spare to a buddy and my dual ATX PSU is running the computer I am typing on).

OK, so you don’t really care about anything other than how it performs,
so next we are going to take a look at how many VOLTS (jay likes volts) this thing really puts out. To do this, I am going to turn on the PSU without a motherboard and compare the power readings on my Digital Multimeter (Radio Shack all the way, got to put it to some use) with what Enermax Claims this PSU puts out – We will see how well its REALLY does. 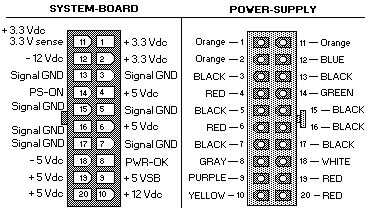 To turn on an ATX PSU (without a motherboard), you need to short Pin 14 on your PSU with a ground, I used pin 15 for the ground.
Notice how an on/off switch can be used – very useful for extra fans. 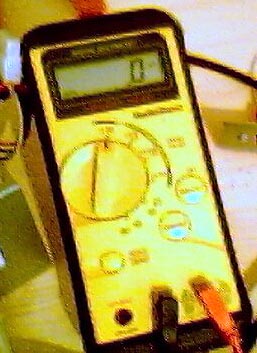 Zero the meter first and let the testing begin. Some readings: 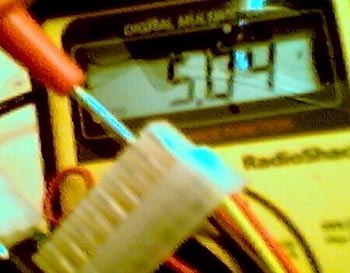 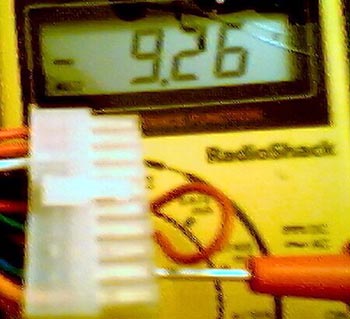 I must say I was not too happy with the -12V reading at all…
There’s still more to come on the -12V line later – like the +5VSB, no low voltage here as some have claimed.

I was disappointed to find that my multimeter couldn’t read more than 10 amps (not 100% sure anyway). So, not being the overly daring one (yet I have no problem soldering my motherboard, Vid pinning my CPU, etc.), I didn’t want to fry a $100 Multimeter. I only tested the 5VSB rail, as many people had claims of it putting out low power.

As I already know, MINE puts out 5V no problem, 5.04 to be exact.
Now Enermax says the PSU puts out:

My meter said the PSU was putting out 3.720 Amps.
More power available, that doesn’t sound all too bad, does it?

The manual that Enermax supplies with the PSU seems to be a generic one for all their PSU’s. So looking at other PSU specs, I noticed Enermax PSU’s that didn’t have a letter in brackets after the model number (eg: EG365P-VE(D) vs. EG451P-VE) ONLY put out 1.8 Amps on the 5 Volt rail, while the ones with the number in brackets put out 2.2Amps.

Could this be why some people seem to be getting low 5V reading through their motherboards???? Or are motherboards just giving us some bad readings (We all know you CAN NOT trust onboard temp readings, are voltage reading all that different?) I would really like some feedback on this.

So could the models without the number in brackets be older models, or just cheaper parts being used???? Once again, that is just something I thought I should mention.

Let’s move on now and do some real testing.
I am using an old faithful king of chipsets, BX board, my ABIT BF6.

Readings look to be very close – not that bad at all. Notice my -12V reading; I was only getting -9.26V before – I like this reading better.

Seems to doing OK – voltages all good. Let’s move on now to something a little more challenging:

Needless to say, I am happy with this. No low volts or anything, and that is with all 8 connectors being used. Something I know a cheap PSU will not do (my old backup). Time to see if this PSU can handle Windows, with the harddrives spinning, moving data, etc.

So how much can we trust the onboard Voltage Monitoring???

From what I have found, it is fairly accurate, but then again this is just my BX board – yours may not be the same. And I would trust the Multimeter over the motherboard any day, but I would say it is a lot better implemented that temperature monitoring.

Well, I have to say this PSU is sure holding its own. Other than my original -12V readings – very odd, as they went normal once the PSU was attached to a motherboard. I really can’t say why people don’t like Enermax. As long as this thing doesn’t DIE on me anytime soon I would have no problem recommending it as a great PSU.

No stability problems using this PSU at all. My Voltage stays at a constant level, no more UPS and DOWNS of a CHEAP PSU (had that problem with my Vcore before). I can run anything I feed this thing and stable, and that makes me very happy (and a happy jay is good thing; just ask the spoon and banana).

Can’t wait till I run this thing in a DUAL PSU setup.
Did I say DUAL PSU’s??? Well that’s another article for another time

Adrian Rojak Pot has an an article about all the people stealing his work and pretending it is their work. This is a pretty common occurrence for websites. It happens to us fairly often, and the response we get is

After I wrote the article criticizing some of the Northwood reviews, I got emails from quite a few people who basically said they had pretty much lost faith in the opinions of most hardware websites and just looked at their

Big thanks to Christian Schmelzer for alerting us to this. The article is here. It’s in German, so if you need a translation, go here and cut and paste: http://www.chip.de/news_stories/news_stories_163106.html The bug affects motherboards with a Via VT8363A Northbridge (i.e.