Here is my home made review of this (not so) portable computer.

I got this laptop for free when I was working in IT for a big airline company here in Canada.
They were about to change all the laptops after contracting with IBM and that laptop was one of those to be put in the garbage. 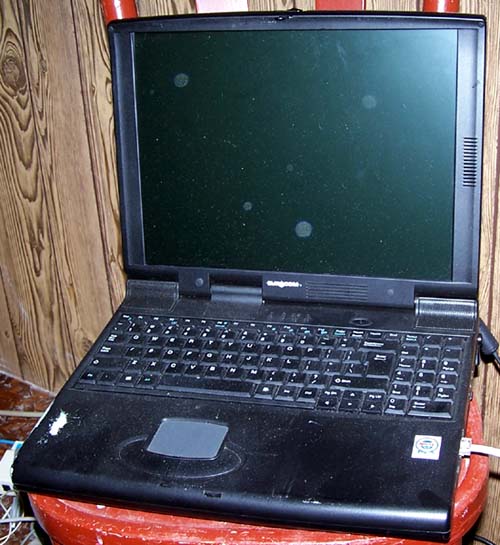 Here are the system specs, as purchased:

When I got it, it was running WinNT4 and the HD was dying, so I got a Toshiba 5200 RPM 30 GB HD, installed it, turned on the beast and it posted. I now have to install an OS on it. I was thinking of Win2K, but since I will be using that portable desktop for work at my customer’s site, I’d rather go with XP, as XP allows me to share folders without having to create users (simple file sharing) which is faster for me when I need something on my laptop. But, will I have some driver and compatibility issues? That’s my main concern.

WinXP installation took a while there – 128 MB of RAM and a P2 400 with the incredible speed of a 5200 RPM HD gives you the picture – much longer then my AthlonXP 2500M @ 2.2 GHZ desktop machine. When I logged in XP for the first time (after waiting for the 128 MB of RAM the be enough usable), I went straight in the device manager to check the missing drivers and to my surprise, All the devices were properly installed. NO DRIVERS MISSING!!!

Now, how does this thing handle XP? Well, let’s say that the beast is quite sslloowww… The max’d out 384 MB of RAM is a requirement for users that want it to be a bit more eh… lets say… eh… Fast??? I don’t mind the waiting time as this laptop is, for me, a portable file server. I use it to access stored software, drivers and stuff when working at my customer’s site. I don’t like to use a laptop on an everyday basis, so my major concern was to get a big HD, which I did in the first place. The 30 GB HD, by the way, was detected by the BIOS no problem.

Now, to the fast review:
{mospagebreak}

The laptop is VERY stable. Ive been using it for almost a year now and I never had to reboot it due to a bug or glitch. It never gets hot and it never freezes, even with only 128 MB of RAM.

The keyboard is quite huge: 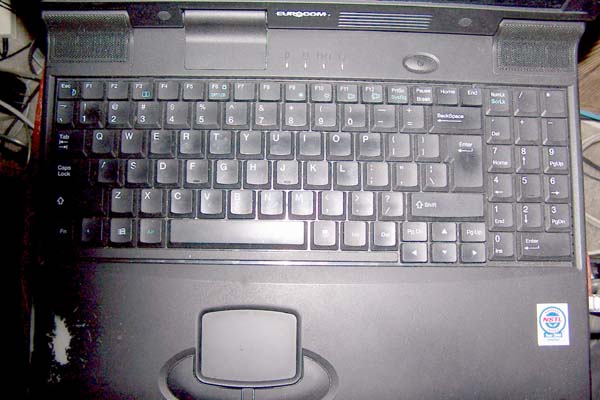 It comes with the numeric keypad and the Windows button – Feels like a desktop keyboard. The laptop is obviously BIG. It weights 4 kg (10 pounds) and has a 15″ x 10.1″ x 2.1″ footprint. Quite bulky – Quite heavy.

The layout under the beast is as follows: 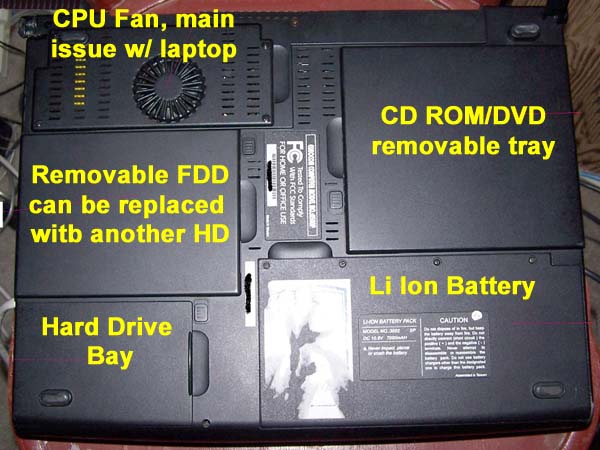 On the upper left side, we have the CPU fan, which is the major issue (we’ll see that later); just under the fan, we have the FDD bay that can by swapped for a second HDD! Lower left corner, we have the HD bay. Top right, the CD/DVD removable bay and finally, the Li-Ion battery pack.

To add memory, you have to get the keyboard out, which like almost all laptops, is held in place by 2 plastic tabs, which can be easily broken. But changing memory is an easy and fast task.

The battery life is near non-existent. The battery needs to be replaced but still can be use for 40 minutes, in “waiting” mode. It lasts for a big 10-20 minutes, when under load, but I don’t care.

Now, to the main stuff:

First, the CPU cooling fan is placed in the most “unusable” place. Hey designers, this is a laptop, it suppose to be use “on lap”. What was the idea to put the cooling fan where your lap goes??? When using the laptop on your lap, in a train or plane, the processor will overheat, as your lap is right where the fresh air comes in the laptop to cool it down. This is a very big problem for “normal users”, as they won’t realize that the fan is REQUIRED for your laptop to work properly and to last more than a week. This is the major issue with this laptop design.

Sound sucks big time. I don’t know if the problem is related to the sound chipset or the speakers, but the sound is VERY low quality. The Welcome sound of Windows sounds like a sick puppy. It’s scratchy and ah well, it sounds awful.

I think the keyboard is a major plus for this laptop. The numeric keypad is one thing that I really miss on a conventional laptop and I appreciate it on this guy. When typing IP addresses and troubleshooting network issues, it’s very helpful. The touch pad mouse works fine. It’s sensible enough for you to work with without being always cautious about the speed and pressure you use. Tapping it will also work fine to do a “double mouse click”.

But, the mouse PS/2 port won’t work properly. This is not a Windows XP issue, as the port was not working properly with Win NT. When using a mouse with the PS/2 port, the mouse will move but you won’t be able to control it. It moves and clicks everywhere – I think it’s a connector issue… The PS/2 keyboard connector works well.

The LCD active matrix screen is OK. Not too good but not too crappy neither. The brightness is just fine, but due to the low maximum resolution (1024 x 768), you won’t be able to enjoy a full size desktop…

The construction is well done (apart from the fan design) – dropping it on the ground (just like I did) did not break anything (plastic casing), but obviously it’s not recommendeded for your hardware. The laptop is well finished with good quality construction.

The Eurocom 8500P does the job I ask. It’s doing what I need from it.
Obviously, it’s not a competitive laptop nor a gaming machine, but it’s a damn good machine for my requirements.

Again, I insist that the CPU fan is a badly designed one and this is enough for me to NOT recommend this laptop for “normal” users, as they won’t enjoy a long life out of it.
I am mostly satisfied with it. It’s solid, stable, has a big keyboard and it DID NOT COST MUCH (only a 30 GB HD 130$ cdn).

That’s it – hope you enjoyed it.

It’s still very very early in the process but I think we can make a few statements about the TBreds 2200+ on sale now. The AIRGAs do a bit better than the original reviewers’ AIRCAs. Using high-end air, one can Read More

I’ve decided to cancel Christmas for myself. It’s not a matter of not having the money, but rather not wanting to spend it on what will be available before December 25. It’s not that the AMD systems you can put Read More