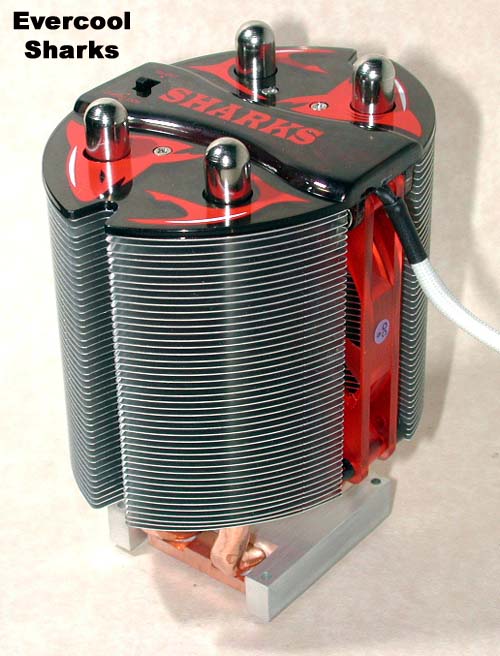 The good guys at Evercool were nice enough to send a sample of their Sharks CPU Cooler to try out.

The fan sits in the middle of the fan array: 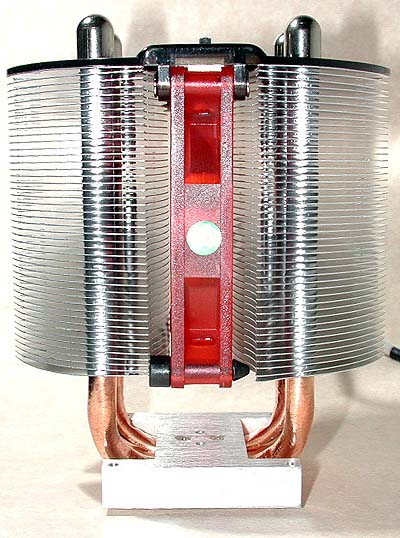 There is a switch on the top of the heatsink to switch the fan between low and high speed – not the most convenient setup.

The base shows no apparent polishing marks: 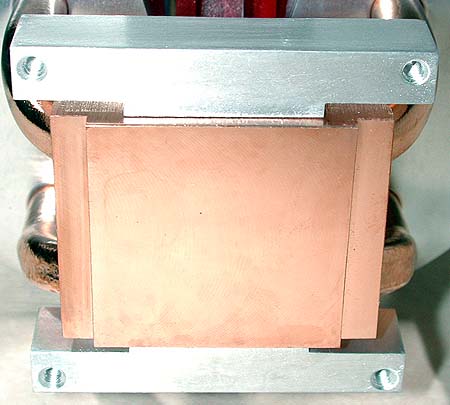 The heatpipes appear soldered to the base:

The Sharks was tested on an Asus P5WD2 motherboard P4 Motherboard Test Platform with a modified Pentium D 805 to read CPU case temps (both supplied by Directron).

Results place the Evercool Sharks in the lower rank of heatsinks tested to date (Heatsink Ranking) with the fan at its highest speed setting. Performance at the lowest fan speed is not recommended under stress; at this setting, the fan is almost silent but noticeable.

Evercool’s Sharks is an attractive heatpipe heatsink with moderate performance – two fan speed settings are possible with a top-mounted switch.

Thanks again to Evercool for sending this our way to test out.

SUMMARY: A very simple approach to dual CPU water Cooling. My son informed me that his BP6 was now “too noisy” and could I do something about it. The BP6 was cooled by dual Alpha 6035s on Celeron 366s running

SUMMARY: Finally! Someone develops a heatsink with a foolproof mounting system – and it performs with the best! The Swiftech MC370-0A gets my vote for the best all-around air cooled heatsink. Having mounted a fair share of heatsinks, I can’t