UPDATE: This product has been recalled by Evergreen. 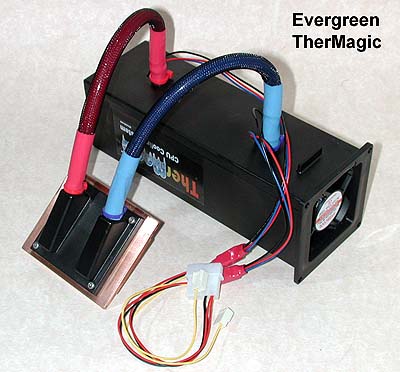 The kind folks at Evergreen were nice enough to send a sample of their first entry into watercooling, the Evergreen TherMagic. The version tested here is the P4 version.

In talking to Evergreen about this product, they stated that its target market is “normal” users who are looking for an easy to mount system to reduce case and CPU temps – NOT the performance user. Their testing is based on a closed case environment; it is their contention that, in a normal case, the combined reduction of case ambient and CPU temps results in superior cooling overall compared to selected air cooling solutions.

This philosophy – designing the heatsink as one element in a system – is another approach to CPU cooling. In this instance, the idea was to dump CPU heat outside the case, thereby lowering case temps resulting in lower CPU temps.

However, this is not how I test – I test a product on its merits alone. How, in a test environment, a tester would account for the complex interaction of different cases, heatsinks and ambient case temps and deliver a meaningful test eludes me.

I found the fans noisy – I measured noise at 65 dBA with a Radio Shack sound meter 8″ from the assembly’s side, almost as loud as a Delta 38 (about 69 dBA). The fans are spliced into a four pin plug, with separate plugs for tach monitoring of each fan. 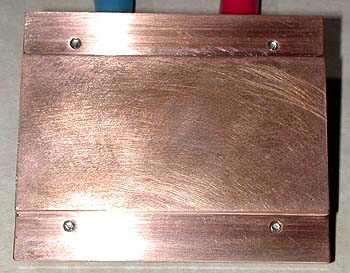 The polishing marks were not those you would see from a machine finish. I don’t know if this it typical of all units sold.

The TherMagic is designed to mount on the PC cases’s exhaust port. The unit ships with plastic push-pins for this purpose. I did not test this in a case, but users should take a close look at clearances before considering a purchase. Also, I would use metal bolts just to be on the safe side – hanging two pounds with plastic push pins seems like a stretch.

The TherMagic was first tested on the CPU Die Simulator which gives results that are unaffected by motherboard influences. I also tested the TherMagic on an Acorp 4S845A motherboard with a modified P4 1500 to read CPU case temps.

As watercooling goes “mainstream”, I think we will see more products targeted to the low end of the market. As always, no such thing as a free lunch. Performance costs money, and low end products typically give low end performance.

The Evergreen TherMagic is not competitive against quieter aircooled P4 solutions. It may result in lower CPU temps in poorly ventilated cases.

Thanks again to Evergreen for sending this our way.

Stot shows how to improve

be quiet! has officially announced one of their new tower coolers, the Shadow Rock 3 CPU Cooler for a March 8th release.