These days, who doesn’t like water cooled computer parts? It’s a good thing too, EVGA’s latest version of the flagship NVIDIA GTX 1080 has a built-in AIO cooler. Coming in with a hefty overclock and the FTW PCB, this should be a real contender on the performance side as well. What do you say we strap it to the bench and put the EVGA GTX 1080 FTW HYBRID GAMING through the paces?

These specifications are taken from the EVGA 1080 FTW HYBRID GAMING website:

Below is a look at several features from the EVGA website. As we know from the review title, EVGA has included the HYBRID cooler on this graphics card. This is a built-in AIO cooler to bring increased cooling performance over what is possible with a traditional heatsink, while keeping quieter as well. The FTW PCB is used here with its 10-phase VRM design, quite an improvement over the NVIDIA reference design, which really allows the silicon underneath the AIO to stretch its legs.

On top of this there’s a second BIOS onboard for those who wish to try their hand at pushing the overclock even further. There’s also an RGB LED that can be controlled in the new Precision XOC software. This ensures your new GPU can blend in, no matter your build colors. EVGA was also nice enough to provide a fan connector that is easily accessible for those of us who might wish to change the radiator fan.

See these features and more at the EVGA 1080 FTW HYBRID GAMING website:

Below is our gratuitous picture of what GPU-Z looks like when it’s reading from the card. We can see the process shrink to 19 nm with the die size coming in at 314 mm squared. This die has 7.2 billion transistors. The core has 64 ROPs and 160 TMUs on the back end of 2560 shaders. With the clock speeds, this yields a 110.1 GPixel/s and 275.4 GTexel/s throughput. As you will also note below, the card, by default comes in at 1721 MHz clocks, a nice OC from the NVIDIA reference speed of 1607 MHz. Boost clocks are, by default, 1860 MHz which is again a nice gain from the reference speed of 1733 MHz, but we all know the actual boost clock is what counts. Memory is clocked in at 10,000 MHz which is the NVIDIA reference.

The retail packaging for the EVGA GTX 1080 FTW HYBRID GAMING is predominantly black and green. The outside is almost barren. Actually, there’s very little to be found. On the front it states “EVGA” along with the GPU model and “HYBRID”. The only feature noted here is the “GEFORCE GTX VRREADY” logo. On the rear is EVGA’s contact information, nothing else worthy of mentioning. Inside is an inner black box with a huge, white EVGA logo. The card is also kept in an electrostatic discharge bag and nestled in a foam casing.

The included accessories are two 2×6-pin PCIe to 8-pin PCIe power cables, some hook and loop tie wraps along with a few zip ties for cable management, and the radiator screws. Not pictured are the manuals and poster. It’s really all you need to get going!

As mentioned earlier, the EVGA GTX 1080 FTW HYBRID GAMING has RGB LED’s to blend in with your build. Otherwise, everything is silver or black, very color scheme agnostic here. I like it.

On the front of the card we see what looks to be similar to a traditional blower style heatsink. This fan moves air across the VRM, VRAM, and AIO pump. There is of course a single 120 mm radiator here with one of EVGA’s fans strapped to it as well.

Turning the card over, we see the included backplate. This of course provides both a structural and aesthetic benefit. I’m not sure if there is a thermal benefit, more on that in a minute. On the backplate we see the EVGA logo cut out and the words “GEFORCE GTX 1080” printed on it.

Looking back to the rear IO area we find three DisplayPort 1.4, one HDMI 2.0b, and one DL-DVI-D connections. Standard connectivity for the GTX 1080! It probably won’t be too long until we stop seeing DVI connections and only have HDMI and DisplayPort back here.

There’s more of an angled view of the card (man, this radiator makes it unwieldy to get good pictures!!) where we can see the edge which would face a case window. The EVGA and HYBRID logos are seen, of course these light up with the RGB LED’s. There are also two mandatory 8-pin PCIe power connections on the right corner.

Here’s a close-up look at the fins of the radiator. By my measurement they’re packed in at approximately 22 fins per inch. Overall the radiator measures roughly 150mm x 120mm x 26mm without a fan. The fan itself is 120mm x 120mm x 25mm. The end of the radiator with the tubes connected protrudes 18mm past the edge of the fan. The tubes running to the radiator from the card are about 13 inches long.

Below are a few pictures of the EVGA GTX 1080 FTW HYBRID GAMING with the RGB LED’s in full force, these can be configured in the Precision XOC software.

NOTE: Currently, I cannot disassemble this GPU. There are a few screws stripped out hindering teardown. This is very unlike EVGA’s typical quality control. We reached out to our contact about the concern, but have yet to receive a reply.

EVGA has long used their Precision X software for overclocking GPU’s, but this generation dawns a new day with Precision XOC. This software was produced specifically for use with Pascal based NVIDIA GPU’s, it does this very well. With a familiar look and compatibility with the new generation of cards, it’s a winner in my book.

Other cards used for comparison are as follows (links are to their reviews):

All synthetic benchmarks were at their default settings, with game benchmarks at noted settings:

To start our results section we’ll go through synthetics first. 3DMark Fire Strike Extreme and 3DMark Time Spy are the first two benchmarks up. Here we see the HYBRID top the results, nudging out the MSI 1080 by as much as 3.4%, even without overclocking. Pushing the card we see anywhere from a 4.8-5.6% gain, not too shabby!

Moving on to the next two tests, HWBot Heaven Extreme and Unigine Valley, we see similar results to the 3DMark tests. The story is actually eerily identical. The HYBRID tops the other 1080 by 2.9% and 3.6% in these tests. Overclocking gained 4.5% or just a hair more!

NOTE: My results in Ashes of the Singularity should only be used to compare the HYBRID to itself, for some reason these results are skewed high. I spent over a week attempting to trace this issue down, even reinstalling the operating system, to no avail. This skew became more apparent as resolution climbed.

In the 1080p gaming results we find the HYBRID tops the range either by just a hair or by a fair margin over the MSI 1080 results. Overclocking had noticeable gains across the board, sometimes to the tune of more than 5%!

Looking next at the 1440p results we see the MSI 1080 squeeze ahead in Crysis 3 and Rise of the Tomb Raider, but the Crysis 3 result could simply be a minor inconsistency in testing as there is a human element involved. Rise of the Tomb Raider was only a 0.7 FPS (1.5%) differential. This was all without overclocking though, when cranked up the HYBRID pulls a decent margin in all testing. Here in the 1440p testing was the first time we saw any results under the magic 60 FPS number, but even so the lowest result was 43.8 FPS (46.3 FPS when overclocked) in Crysis 3. This was most definitely still playable at the highest settings possible for this brutal game.

Wrapping up with the 2160p results, there are only numbers here for the HYBRID. We’re working on our database of 2160p results currently. Even so, most of the games in our suite are playable (read: higher than 30 FPS) even at these max settings we use. The only ones which were in the sub-30 FPS range were Crysis 3 and Rise of the Tomb Raider, they’re simply brutal games and need to be turned down a tad at 2160p with a single GPU.

The HYBRID cooler does its magic, that’s for sure. Even overclocked I never broke 38 °C in testing for temperatures. I’m sure this could climb some when in a case rather than on an open-air bench, but you should never have issues with high temperatures on this GPU. As expected, the AIO used here is incredibly quiet and produces a tone pleasing to the ears.

Even when overclocked the max power draw at the wall for the entire system was 384 W. Taking out PSU inefficiency (about 90% at this load level) we end up with the system components pulling approximately 345 W. Looking back at the results, my mind is blown. An overclocked system with an i7, two AIO’s, and a flagship GPU absolutely sips power these days. Even as recently as a year ago this number would have been at least 100 W higher for a lower performance system, great times we are in here folks.

This card was rock stable at +160/+500 in Precision XOC, I might have been able to eek out another MHz or two, but this was just about all it had. Even so, with the CPU kicked up to 4.7 GHz and the cache at 4.1 GHz, Fire Strike Extreme ran again to get up to an overall score of 10768. This occurred at an actual boost of 2176 MHz. 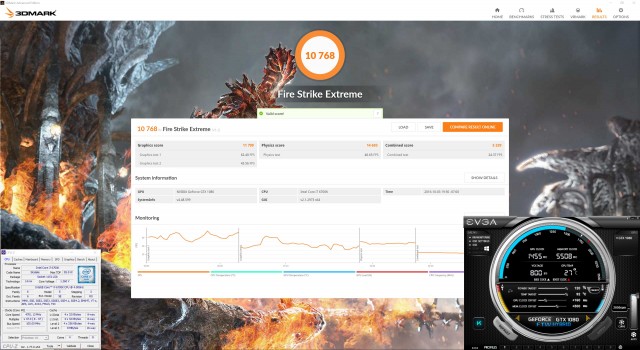 EVGA has outdone themselves again. It’s quiet, powerful, overclocks well, and will run basically any game… at any settings… at any halfway reasonable resolution. The packaging kept the GPU nice and safe during transit, no thanks to UPS tossing it around, and the colors used here are build agnostic. RGB LED’s make sure you can use it with any scheme, though. It’s worth noting that this cooler is available for your 1070 or 1080 from EVGA as a separate kit, for $119.99.

My only gripe here is, most certainly, an isolated incident. I really wish we could have pulled this card apart to see what was under the hood (we know it uses an FTW PCB and an Asetek AIO though).

The EVGA GTX 1080 FTW HYBRID GAMING is currently on the EVGA website in “auto-notify” status at $729.99. It is also listed on Newegg, albeit sold out, at the same price. Regarding the price, considering the EVGA GTX 1080 FTW GAMING itself brings in an MSRP of $679.99, I would say the MSRP of the HYBRID is quite justified. You’re really only looking at a $50 price difference to jump to a water cooled graphics card. To sweeten the deal, EVGA is also offering a free “PowerLink” with registration of any GTX 10 series graphics card to help clean up cable management. I’m giving this one an Overclockers Approved!

This week we get to check out the SilverStone Redline RL05. This case was a joy to build in and was one of the smoothest builds I’ve ever had. It’s stylishly simplistic, available in red or black trim options, and has a price tag small enough to keep any builder happy. Read More

If you know water cooling, then the name Primochill is familiar to you. We have one of their new items here today to review – the new Primochill Compression Tube Reservoir (CTR for short). Read More

EVGA jumped into the chassis market recently with an ITX case dubbed the Hadron. They will have two versions of the case, one for air cooling and one for water cooling. We’ll be taking a look at the Hadron Air to see what EVGA is bringing to table for the growing ITX market. Read More