I was pretty surprised when I received the info that EVGA is offering a DDR4 memory kit for review. Somehow I missed the fact that EVGA had entered the DRAM market some time ago and has already presented DDR3 and DDR4 memory kits designed for both gamers and power users.

There is a good reason I could have missed the premiere of EVGA’s memory kits. This memory is available almost only in the USA, and I live in Europe. It simply isn’t available in local stores, even the EVGA online store for Europe isn’t selling memory kits. That’s enough about availability, let’s focus on the product itself.

Below you can see the other memory kits offered by EVGA.

Our review sample arrived in the retail package, which is a plastic clamshell. This transparent package is good enough to protect memory while letting us see what’s inside. No surprises here, it’s simply memory sticks inside. In this case it’s four of them since this is a quad channel kit.

EVGA SuperSC is memory designed for the X99 platform which, as I already mentioned, utilizes quad channel mode. I’ve additionally performed a couple of tests on the Z170 platform and had no problems with compatibility or stability. This is actually really good as many memory kits designed for the Haswell-E platform have run into problems on Skylake when using XMP profiles.

After opening the package we can read:

Optimized and tested for compatibility with the latest CPUs and Motherboards. Support for Intel XMP.

This doesn’t say much about the memory itself, but it gives promises that we will also check.

These EVGA memory modules use a black PCB which is then protected by black heatsinks, which gives very good aesthetics. Overall the design is not much different from other high end memory brands, and those designs are already accepted by enthusiasts and overclockers. It simply looks good and compliments most available motherboards. Of course it compliments EVGA’s motherboards which are mainly black pair nicely with this RAM.

The memory modules are based on Hynix IC’s. This is probably the best option for the X99 platform due to characteristics of these memory chips such as tight timings and the chance to run it at a frequency higher than it is rated for. High performance and high overclocking potential is what everyone is looking for in a high-end memory series. So far expectations are high regarding the EVGA SuperSC memory.

EVGA SuperSC 16GB DDR4-2800 memory kit passed a few demanding tests including 5 hours of AIDA64 memory and cache stress test. Some readers can say it’s not enough but the testing took a couple of days and during this time there were no problems with stability.

Below is a screenshot of the mentioned 5 hour AIDA64 stability test. The test was performed on XMP settings. 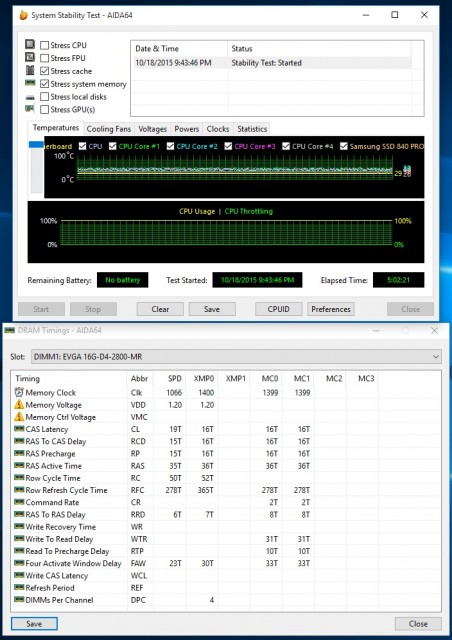 There is only one XMP profile, but that is enough for this type of memory. It’s working without issues on both the ASRock X99M Killer 3.1 and the ASUS Maximus VIII Hero which is based on the Intel Z170 chipset. As I already mentioned earlier, not all memory kits designed for the X99 chipset are working on the Intel Skylake platform, but in this case we shouldn’t have problems regardless of what platform we choose.

This platform isn’t anything unusual so readers shouldn’t have any problems comparing to results on their home computers. It is worth mentioning that the processor has been overclocked to 4.2GHz on the core and 3.5GHz on the cache to better show differences in memory performance. These settings are easy to achieve on any motherboard that is based on the X99 chipset.

The first test will be AIDA64. This program has many diagnostic tools and also includes one of the best on the market benchmarks to measure memory and cache performance, so it’s perfect for all kind of memory reviews. 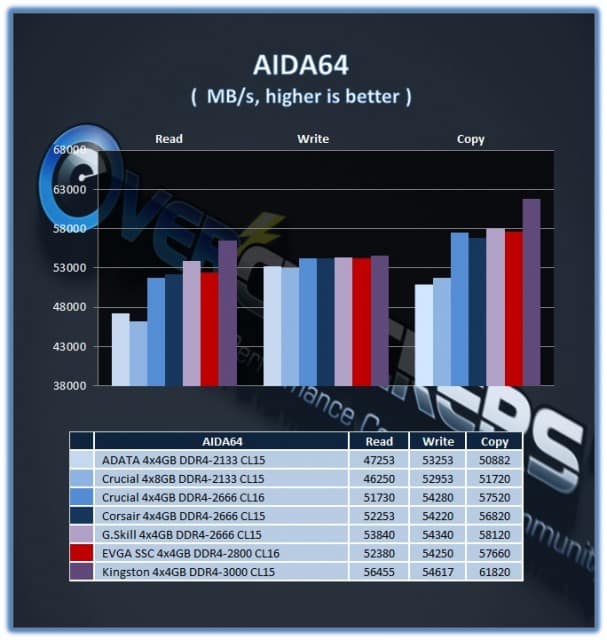 Looking at our comparison, the EVGA SSC memory is performing well in AIDA64 memory tests. As expected it’s somewhere between DDR4-2666 and DDR4-3000 memory kits, with one exception where the G.Skill DDR4-2666 CL15 memory kit is slightly faster due to much tighter timings. However that difference isn’t big.

AIDA64 is performing tests in a multi-threaded environment while the next benchmark on our list, MaxxMem Preview, is only using a single-threaded test. 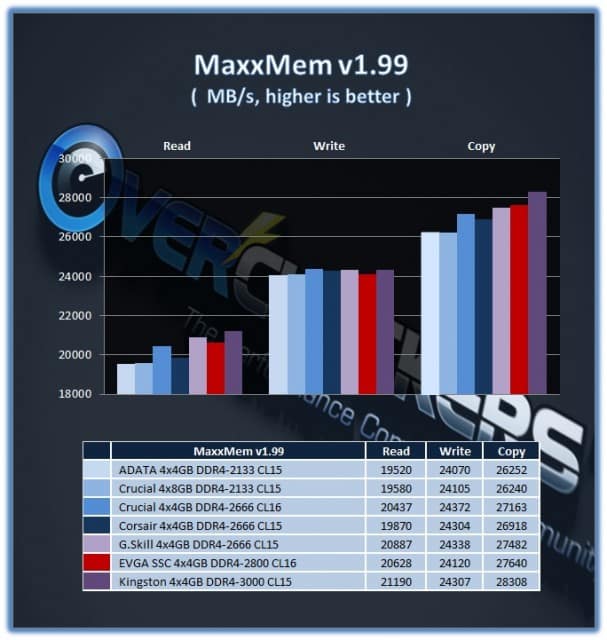 In MaxxMem we see a similar situation as in AIDA64, so EVGA SSC memory is about where is should be, right between lower and higher frequency memory kits. Also this time the difference in performance isn’t very significant. I would also like to add that most of the memory kits in this comparison are high end series with well designed XMP profiles. This only proves that EVGA did a good job designing its SuperSC memory series. 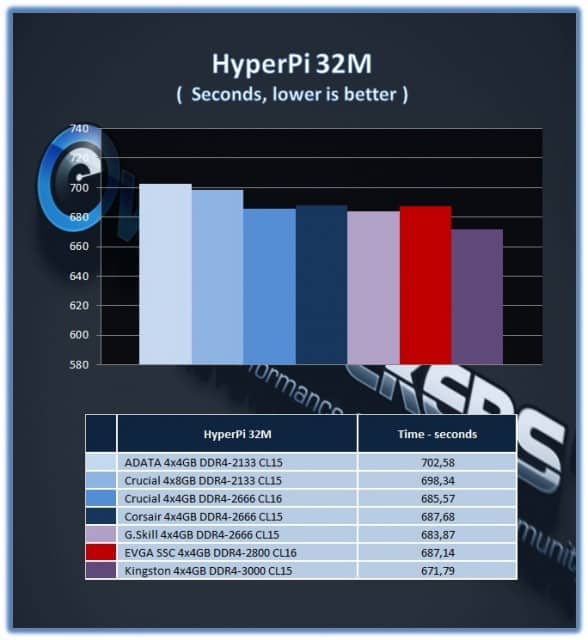 To end this part of the performance tests we have HyperPi 32M, which is one of the more popular overclockers benchmarks. Its based on multi-threaded SuperPi calculations, making it better for new platforms. It also loves fast memory so it’s good for memory comparisons.

EVGA SSC DDR4-2800 memory is, again, in roughly the same place. The results are good in all bandwidth and calculation tests, so we can be sure that the XMP profile is well prepared just as EVGA promised.

This part of the testing is probably more important for most users. I will start with Cinebench which is one of the most popular rendering benchmarks. 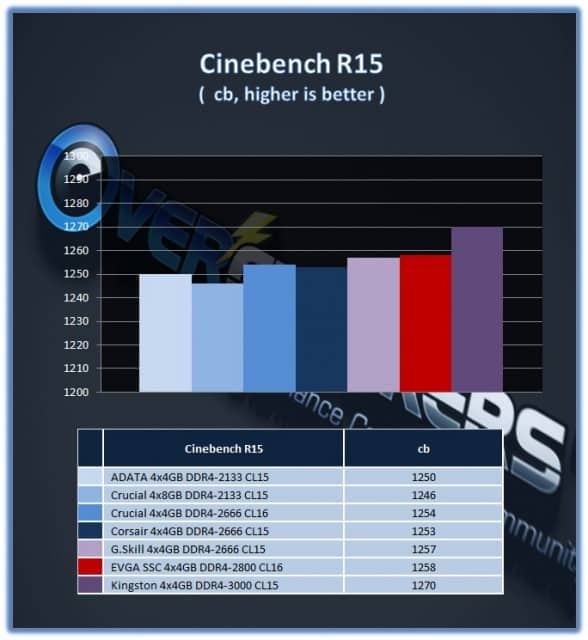 Cinebench reacts well to memory bandwidth, but the Intel Haswell-E platform with its quad channel memory has good results regardless of the memory being used. This is probably the main reason that all our results in this benchmark are similar.

We can still see that increasing memory frequency is raising the benchmark score though. EVGA’s memory is performing well in this test, taking second place in our comparison. 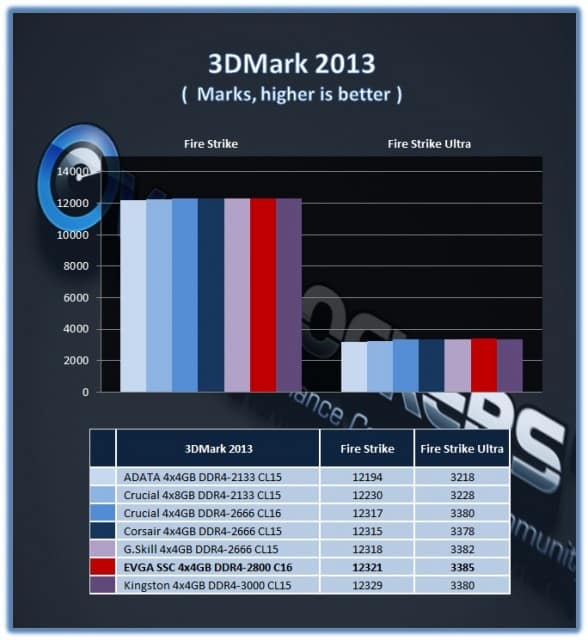 Now it’s time for the Futuremark benchmarks. Above we can see the latest 3DMark Fire Strike and Fire Strike Ultra tests. Both tests are very demanding but, as with all 3D benchmarks, they are based more on graphics card performance than anything else. We can still see that memory performance slightly affects the processor and physics tests, which gives us small differences in the final scores.

EVGA SSC DDR4-2800 memory is not much slower than the DDR4-3000 memory. We can see that in Fire Strike Ultra the result was even slightly better, so I assume that on both frequencies the performance will be equal and gamers won’t see any difference. 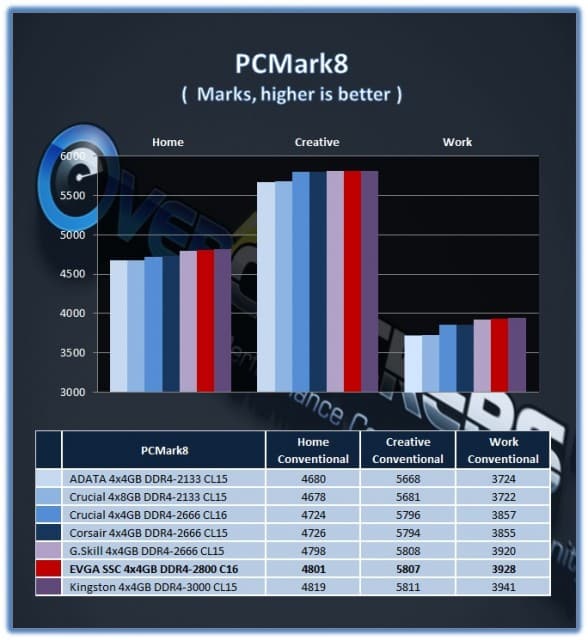 In PCMark 8 we can see bigger differences in scores, up to 200 points, which is significant considering that we are using the same processor, storage, and graphics card. In PCMark 8 both memory bandwidth and access time counts. We can see especially when comparing DDR4-2666 CL15-15-15 to DDR4-2800 16-16-16 memory kits. All the results of these kits are close to each other. We could also see similar situations in the calculation and bandwidth tests.

Overclocking is never guaranteed so the presented results may vary from results on other memory kits. I am not recommending overclocking if you do not know what are you doing. High voltages may damage hardware and it will not be covered by warranty.

Below we can see the expected performance without additional timing tuning, meaning even less advanced users can set this easily. These settings also passed all our benchmarks like PCMark 8 and 3DMark.

The maximum frequency achieved on our test platform was 1700MHz (DDR4-3400) at pretty tight CL16-17-17-36 main timings and command rate 1N. Voltage was in still in the reasonable range at 1.42V. This result wasn’t fully stable and only let us pass only less demanding tests. Below we can see the expected performance as tested in AIDA64.

Feel free to share your overclocking results on the Overclockers forums.

EVGA entered the memory market with very good products. As I mentioned at the beginning of this review, I was pretty surprised to see this memory simply because it has really limited availability. We can find it at the EVGA store, or exclusively at Micro Center where the price is much lower at about $130. It’s not cheap, but also not expensive. We’ll say it’s an average price for a 4x4GB DDR4-2800 memory kit nowadays.

EVGA SuperSC memory is well designed and passed all our tests without issues while showing high performance. The XMP profile even works on better Z170 motherboards, but typically with an updated BIOS.

Memory modules are all black, black heatsinks and PCB, which should match most motherboards on the market and all available EVGA motherboards if you wish to keep all components from one brand.

I hope that EVGA releases a wider line of DDR4 kits since we had the premiere of Intel Skylake. I also hope to see various colors of heatsinks and maybe a more unique design. Even though the modules look good, they are similar to what we can already see from other brands.

I also wish to see more aggressive memory settings like tighter timings or higher frequency. Right now the highest available version is presented in this review, the SuperSC DDR4-2800 16-16-16-36 1.20V memory kit. The specification is good and gives hope of high overclocking potential, but it’s a product designed for gamers and enthusiasts who may wish for something more above these already popular settings.

Since I mentioned overclocking, the EVGA SuperSC memory has a really high overclocking potential. We couldn’t stabilize it at the DDR4-3400 mark, but I guess it’s just a limit of the test platform as the timings used were pretty tight for such a high frequency and relaxing them was not helping at all. On the other hand, it gives me hope that maybe our readers will be able to achieve better results, as EVGA memory clearly has potential.

EVGA recently announced a new gaming mouse to be added to their ever growing product line – the TORQ X10. We got our first look at the TORQ X10 back in January at CES 2014, but now EVGA is ready to make it available to the masses. The TORQ X10 mouse comes in two versions, one with a real carbon fiber surface and another without. Both versions are identical in functionality and design, but the real carbon fiber model will be a bit more expensive. The TORQ X10 comes loaded with features and customization options that should appeal to a wide swath of gamers and enthusiasts alike. So, let’s find out how EVGA did with their first foray into the gaming mouse market! Read More

Next up in our tour of the new Turing GPUs, is an EVGA RTX 2080 XC Ultra Gaming. Their XC line of cards in the RTX 2080 series includes a dual fan cooler mounted to a robust heatsink and an overclock from the factory. Also in their lineup is the FTW3 Ultra. This card uses a three fan cooling solution and is the most overclocked fro EVGA. The XC Ultra Gaming this review is about is one of those dual fan solutions and the 2nd fastest in their 2080 lineup. We’ll test the EVGA RTX 2080 against the Founders Edition and the MSI RTX 2080 Gaming X Trio card we recently reviewed to see how it performs and how it places itself in the market. Read More