This design is my 5th or 6th revision and represents the highest performing system I have come up with yet. Some of the previous designs had all of the water-cooling components inside my case – I found designs like that were very awkward and limiting. Although they worked, I knew it could be done better. And after 2-3 years of water-cooling, this is the result I came up with.

Basic picture of the overall case: 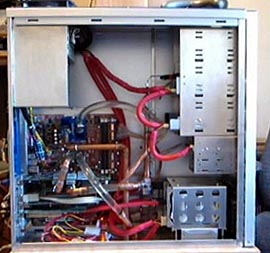 This is the back of the wooden box: 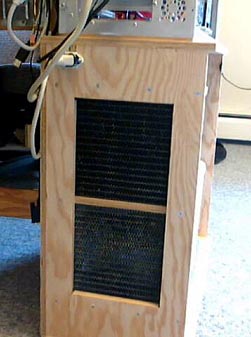 Twin Fans for a Retail Celeron

What you need: Needle nose pliers Retail celeron heat sink Cable ties (also known a zip ties) small enough to fit through the holes of a 5 cm heat sink fan (the ones I have are 3.5 mm wide, called

To The Victor Goes The Spoiler

When I decided to build an overclocked rig, it was a completely new adventure for me. I had built conventional PCs in the past – 5 to be exact – but had never attempted anything that required modding a case,

ED Note: I have not tried this yet, so if you do, tell me how it goes – Joe I have an Alpha PAL 6035 heatsink with a 60mm Delta 38 cfm fan. This combo was mounted on a slotket