Our comments on Cuil.

That’s the most positive comment I can muster about Cuil.

Here’s a few others:

Occasionally, it comes up with what you want.

It looks a little prettier than Google.

Enough with the putrid positivity. You’ll take my Google when you pry it from my cold, dead fingers. That’s what I think about Cuil.

I tossed in some keywords related to some very and fairly recent news events.

First, I tried “Robert Novak brain tumor”. It brought up absolutely nothing relevant about Mr. Novak’s diagnosis, though it often added a picture of Mr. Novak along with whatever it came up with, even when the picture wasn’t part of the webpage.

OK, that was yesterday’s news, might be unfair to expect a very recent websweep from Cuil.

We could continue in this vein for quite some time, but let me show one it did find. I typed in “Stroligo do or die”. The do or die part was the name of an article I had written at the beginning of 2007.

It did find the article, though hardly on top, but let me show you what else it found: 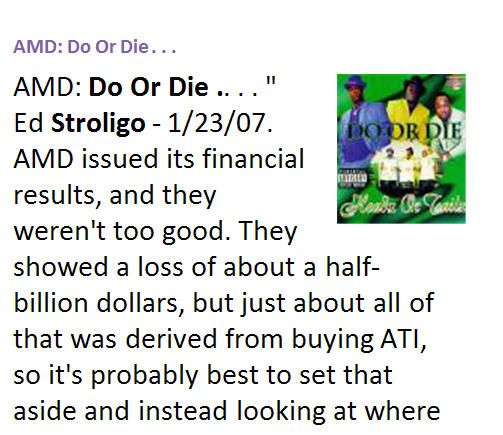 Needless to say, Google had no problems with any of my queries.

I’m afraid Cuil reinvented the wheel and made it square.

About Ed Stroligo 95 Articles
Ed Stroligo was one of the founders of Overclockers.com in 1998. He wrote hundreds of editorials analyzing the tech industry and computer hardware. After 10+ years of contributing, Ed retired from writing in 2009.

You have to read this article about Steve Jobs using LSD – I must live under a rock not to have known this. One way to think outside the box?

Sing for your Supper?

Microsoft is going all warm and fuzzy – here’s a contest to Sing About Bing For A Chance To Win $500. You Know You Want To. Good thing they did not do this for Vista.