SUMMARY: Runs at 200 MHz, although whether your PC can handle it is another question. Discount Coupon at end of review valid through Saturday, September 14th.

Seen one, seen them all.

According to the manufacturer:

You can see more details on XtremeDDR DDR400 True with this link.

This module ships with a heat spreader. As I looked at it, I found this:

Hmmm…not much help from the heat spreader here.

Being curious about what’s inside (and responding to email requests), I VERY CAREFULLY removed the two clips holding the heat spreader onto the chips:

The heat spreader is held in place by some sticky (thermal?) tape, so I VERY CAREFULLY pried off the side that did not fully contact the chips and found these chips: 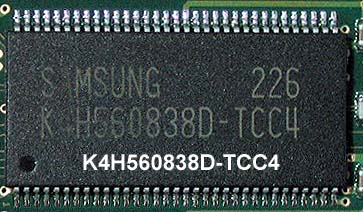 I added the white text for clarity.

From Samsung’s site (thanks Jason!), you can use this link to decode Samsung chips – C4 designates a 5ns, CAS3 part. The “C4” designation is also posted on Xtreme’s wesbite in a Samsung document HERE (p3) indicating “DDR400 (200 MHz @ CL3)”.

In a conversation with XtremeDDR, they strongly suggest that this module ONLY BE USED in
DDR 400 Motherboards – click on the link for recommended motherboards.

To test the RAM, I used Ultra X’s RAM Stress Test Professional (R.S.T. Pro). This is a stand-alone PCI card – it does not need hard drives or an OS to run. The motherboard boots up and then the R.S.T. Pro takes over. The testing is quite rigorous and, after running at least 5 loops, will identify problems down to the chip and sectors within the chip.

I ran two tests – one at spec settings and one at CAS 2, with the following results:

It ran as advertised. More aggressive CAS settings knocked the speed down, as expected. I would not suggest running at 200 MHz unless you have a /6 divisor to keep PCI speeds reasonable.

I doubt if many hard drives and a lot of PCI cards would stand up to this level of overclocking at all, or too long.

If you have a system capable of running OK at 200 MHz, the Xtreme DDR 400 is up to the task, although not at aggressive memory settings. Xtreme strongly recommends that this part only be used in DDR400 motherboards.

Thanks again to E Powerhouse PC for sending this our way – they are giving a coupon to get $5.00 off a memory purchase.

Today, we are evaluating Team Group’s T-Force XTREEM 4133 MHz DDR4 memory modules. The XTREEM line of memory from Team Group doesn’t have any flashy RGB or wild color schemes. What it has instead is rock solid performance and legacy of legendary overclocking results. Exceptional build quality, high XMP speeds, and performance are its major hallmarks. Join us as we take a look at these features and investigate the XTREEM memory’s overclocking potential. Read More

RAM, RAM and more RAM! I love RAM reviews. Pity I haven’t had time to write two of the kits that arrived here. You saw those reviews from Lvcoyote and EarthDog, respectively (thanks for the assist guys!). There was time to review this ADATA DDR3-2400G kit and the results do not disappoint. Let’s get straight to it and dig into this nice looking set of RAM. Read More