My desk fan at work was getting dusty, old, and tired. And it lacked distinction. And it was starting to squeak.

So, one day while fiddling with a pile of spare parts, it occurred to me that I could build a better fan. One that was pointlessly powerful, time consuming and hopelessly over crafted. One that would make people stop, look at it, and say “What the hell?” In short, I decided to build FANZILLA.

The purpose of Fanzilla will be to enhance cooling of myself over that available from stock desk fans, and to have fun while building it and explaining it to people. 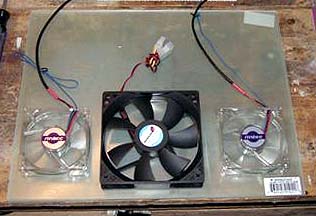 Start with a pile of spare parts – three fans, two blue Antec 80 mm and a 120 mm for the center. The plan is for the 120 mm to be variable speed with a rheostat.

Next, I cut the plexiglass pieces to size with a jigsaw. I cut slowly, at a relatively low speed, with the plastic protective sheets on the glass, and had no problems, except with a little chipout at the very end of the cut. Slowing down at the end put a stop to that. 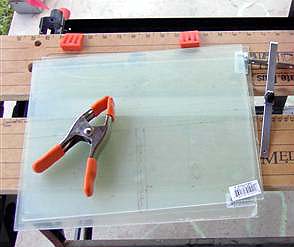 Next, I cut hole for the fans using a Dremel tool with a spiral cutter. I used the fan grills as a template for drawing the holes and locating the screw holes. 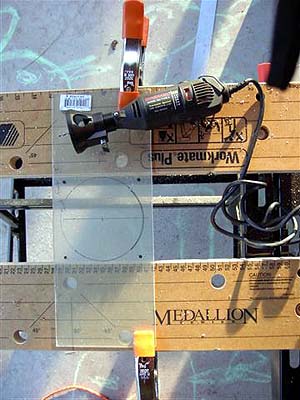 Then I took a power supply from an old small form factor AST PC – it’s 180 watts. I started with the idea of cutting a hole in the power supply, but ended up tearing the top off and exposing its glorious innards to enhance the pleasure of the plexiglass viewing experience.

I thought that with the power supply fan blowing in and three holes cut the same size as the output holes, there would be ample air flow for the fans. Didn’t quite turn out that way, as I will talk about in the conclusion. I think the real reason I did this was because I knew the reciprocating saw wasn’t going to be used, but this seemed like a way to work a Dremel cut-off wheel into the project. 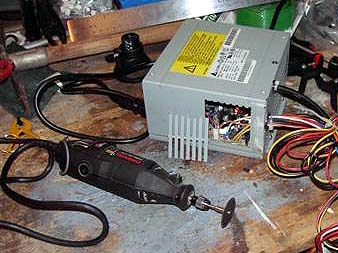 A hacksaw and mitre box served to cut the angle aluminum for the edges of the box: 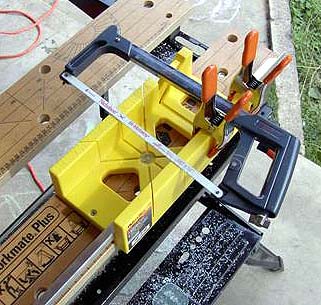 Measuring and cutting all those pieces of angle aluminum was easier than I thought it would be. I cut them about 1/8 inch too long, then used a file to make them flush in the corners.

After all the cutting and drilling came the gluing. I used epoxy to hold it the box together. I thought it would stick to the plexiglass and not to the aluminum – the opposite turned out to be the case, but it stuck together well enough. 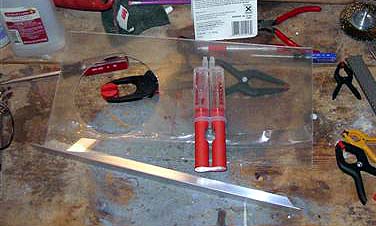 Note to self: Next time you try to epoxy a box out of plexiglass, make sure you have all the right clamps.
{mospagebreak} 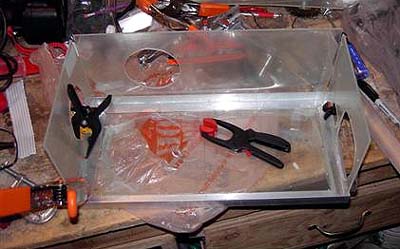 The box starting to take shape. 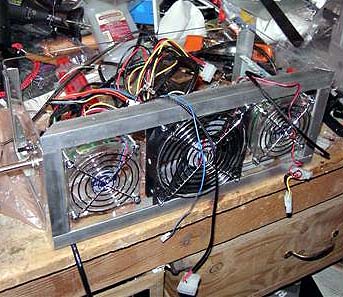 Note the rheostat and power supply switch on the lefthand side. I glued up the bottom and then sized the top so that it would slide on and off. Also, I hooked two super-bright green LEDs up to the power line to the 120 mm fan, so that they would dim and brighten along with the speed of the fan. I used the recommended series resistor to be safe. 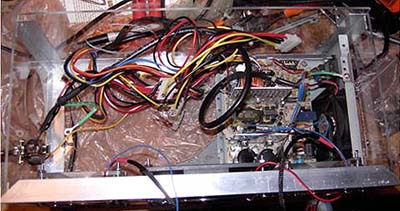 In this view, you can see the power supply with the cover totally removed. Note to self: Pick up some wire organizing supplies. 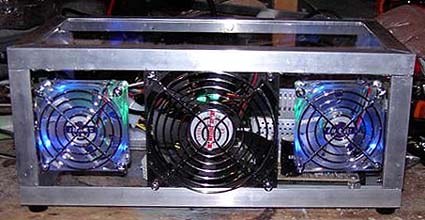 The blue LEDs from the Antec 80 mm fans are brighter than they appear in this flash photo. You can also see the green glow from the twin super-bright LEDs behind the 120 mm fan. I tidied up the wires a bit with some wire ties.

Conclusion: In its effects on passersby, the beta version of Fanzilla was a great success. The reactions were mixed, but universally in the intended domain from “What the hell is that, and did it take as much time to make as it looks, and what’s the point?”, all the way to, “Dude, is that thing for sale?” Exactly. “It’s a fan. Just a fan.”

As an air mover, though, Fanzilla v.1-beta-1 was a slight disappointment.

If a very quiet, pretty fan is all you want, then this approach is for you. But I was looking for something more. Something with more top end and with more pizazz.

For some reason, probably all those wires inside, airflow wasn’t all it could be. So, I am currently on Fanzilla v.1-beta-2, which features a Thermaltake Smart Fan 2 outboard, top center, stuck on with double-sided tape, along with a spare blue cold cathode that a buddy gave me. The Smart Fan really takes away from the visual harmony of the design, but now the thing really moves some air when you crank up both rheostats. I also added a clapper for semi-remote control purposes. 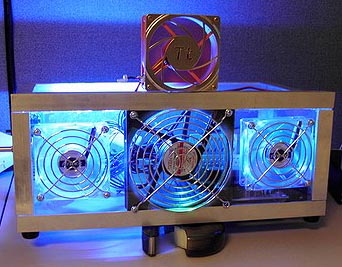 Also, those front feet need to be the kind that screw out so that Fanzilla can tilt upwards. For the version 2, in addition to the modifications already mentioned, I think USB port control is mandatory, with a camera, and some kind of wind speed indicator so that you can remotely control Fanzilla and watch the effects of its hurricane-like output.

Yes, Fanzilla v.2 will be all that, and perhaps will include watercooling, or peltier devices…and in case, will be made from a material that requires a reciprocating saw to cut. I saw a room air conditioning unit on sale at the home center today, and I keep thinking that might be a place to start…

Too Terrible To Contemplate? . . .

There’s been a lot of bad news about AMD this year, but a lot of people don’t want to hear it. I’m not talking about fanboys, but those who essentially say, “My God, AMD’s got to pull through, because if

News Items: AMD Accidentally Sends Out PR Schedule Talk about non-news! With one possible exception (see below), could anybody give me a single good reason why any of this is such a big secret? The China announcements are the only