SUMMARY: This CPU does about what other PIII 800s do on the high side – with aggressive cooling, I don’t doubt that 1100+ is achievable. 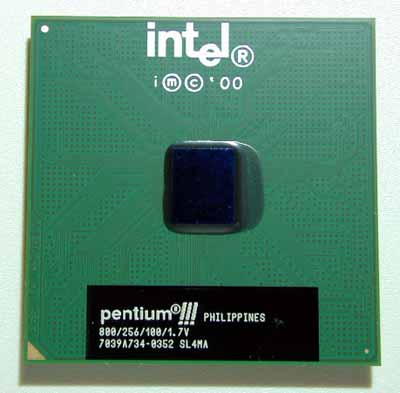 The good folks at Nata Computers sent us a retail PIII 800E to test out. This is a Cc0 stepping, Philippines CPU SL4MA, serial # 7039A734, version # A30423-001. CPU ID identifies it as Family 6, Model ID 8, Stepping 6. Philippine CPUs do not have a good reputation compared to Malaysian CPUs.

As a side note, I warn all water cooling users not to neglect cooling components around the CPU’s socket. I set the Iwill up without a case and as I tested, I noticed that the capacitors and power transistors around the socket were hot. I dropped the CPU temp 10C by mounting an 80 mm fan next to the socket to cool these hot chips! Turns out they were heating up the copper water jacket! This should not be an issue in a well ventilated case.

This is our first pass with this CPU – We’ll do some more testing with it and see if it does better. A 50% overclock to 1200 would be superb.

I’ve waited a long time to write this 🙂 If you’ve been waiting to buy a Coppermine, your wait is just about over. We have enough information from those of you who bought and tested cB0 stepping Coppermines to conclude

I’d like to thank all of you who sent me emails telling me what you bought and how you did! Conclusions 1. The supply of cB0 chips out there has improved quite a bit. There’s still reason for some caution,