SUMMARY: Surprising what a little horsepower will do – the Alpha PAL6035 and Global Win FOP32E with a 33cfm fans look like OK AMD coolers. Interestingly, a modified Global Win FDP32 does just as well – what progress! 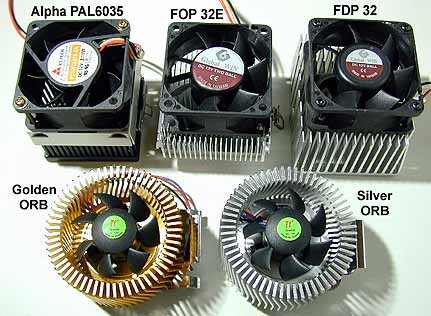 The kind folks at Nata Computers sent us the new Thermaltake Silver ORB to check out. This is the same as the Golden ORB except it has an 11,000 rpm fan – almost 3 times faster than the Golden Orb’s. Another difference between the two is the clip – either one still takes a fair amount of effort and I didn’t perceive any real difference between the two.

In addition to the ORBs, NATA earlier sent the Global Win FOP 32E, so I decided to include it as well. While I’m including things, I figured let’s throw in the Alpha PAL 6035 and, for giggles, the Global Win FDP32 – an older model not certified for either Coppermines or AMD socket A CPUs. I modified it by grinding down one side of the bottom so it would clear the socket’s bump (pic below). And why not throw in a Papst 33 cfm fan (courtesy of Swiftech) into the mix and see what happens?

While testing, I found the old FDP32 was doing a credible job. So the “Strong Clip” version in the Results Table included replacing the old heatsink clip with one from the FOP 32E, pictured below; this new clip is the result, I am sure, of thousands of hours of intensive R&D. 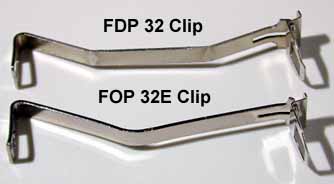 My old favorite, the Alpha, comes through again, although the Global Win FOP32E is not far behind; the 33 cfm fan clearly boosts performance nicely. In a stunning endorsement of Global Win’s progress in bringing up-to-date cooling solutions to consumers, the modified FDP32 trails the FOP 32E by one degree at idle – what progress!

Of particular interest is the importance of pressure – note the difference in the FDP32’s performance: Adding just the stronger clip decreased temps by four degrees.

Following closely behind is the Silver ORB; compared to the Golden ORB, the Silver is a clear choice, if ORBing is your thing.

However, if “off-the-shelf” is your thing, either the Alpha, Silver ORB or Global Win FOP 32E will give you about the same performance. Not that I personally am comfortable with these temps – these are temps with no case. Ambient temp here was 21C/70F; unless your case runs at ambient temps, higher case temps will skew these up to levels I would be very uncomfortable with.

I still feel that good air-cooled solutions for AMD’s socket A CPUs is lacking. When I can mod an old socket 370 heatsink to perform about the same as current generation products, it tells me there’s a lot of old wine in new bottles out there.

Overall, the Silver ORB looks like a good choice – Alpha performance at ORB prices. Noisier due to its faster fan, but not excessively so. The Papst fan is noticeably louder.

SUMMARY: A terrific radiator for space constrained cases with lots of “cooling overhead” for double peltier setups. I have outlined in black marker how a 120mm fan fits; note that drilling holes to mount the fan will be tricky. I