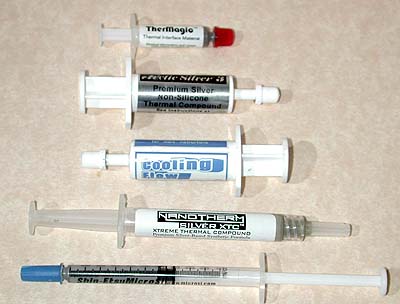 By coincidence, some new thermal greases showed up in the mail – a grease test was in order, so I included the following:

I found each grease easy to apply with the exception of Shin-Etsu MicroSi. The other greases have a consistency similar to mayonnaise, while the Shin-Etsu MicroSi was more like spreading cold butter on bread; it was denser than the other four and more difficult to apply in a thin, uniform coat.

Removing each grease revealed very little on the die and heatsink, with the exception of the Shin-Etsu product.

I tested the five thermal greases using the Die Simulator (69.1 watts) with a Thermalright SLK800, cooled with an ADDA 60mm fan spinning at 5550 rpm. The SLK800 has a very stiff clip. Before each test, the die and heatsink was cleaned with a solvent to remove any traces of grease. A thin grease layer was applied to the die, then the heatsink was mounted using the heatsink’s clip.

Each grease was tested four times – two runs in two mountings. The heatsink was unmounted, the die and heatsink cleaned with solvent, a different grease applied and tested twice. Each mounting sequence was in random order. Temps were measured with an Omega digital thermometer. Testing was done in one 8 hour period; results showed little variation for each grease (0.2 C max).

I have ranked the top four greases as equals – with a temp difference of less than 1 C between them, results are close enough so that users will find little difference between these products.

Any of the top four thermal greases tested will do fine (although TherMagic is NOT for use on aluminum); with results so close, there is no “winner” here. Users may find one grease will do slightly better than another in their particular setup, but overall the differences appear minor.

I purchased a syringe each of Arctic Silver thermal grease at Cooling Store last week and have now had some time to evaluate it. It claims to be more efficient than other similar thermal compounds, while being cheaper and NOT