SUMMARY: A newcomer to the scene, the Fortis A102 proves to be a very competitive heatsink for Socket A/370 CPUs. 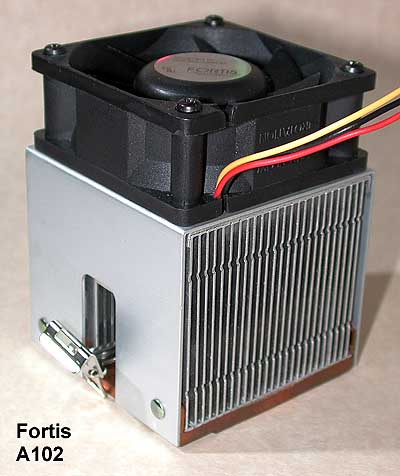 The good folks at Fortis Technology kindly send over three heatsinks for us to test out – the A102 is the most aggressive heatsink of the three (I’ll report on the other two shortly). This is a relatively tall unit compared to the more compact copper units we have been testing, although much lighter due to its aluminum body.

This is another copper/aluminum hybrid, featuring a copper base and aluminum fins. The fins have an interesting feature: 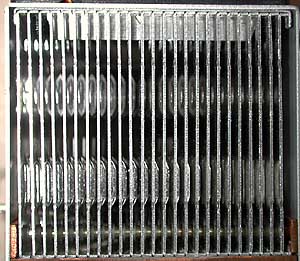 You will notice that there are two “bumps” on each fin – these appear to be punchouts designed to increase turbulence, thereby increasing efficiency. I have not seen this technique used too often, although I have seen similar “bumps” on some radiator fins. 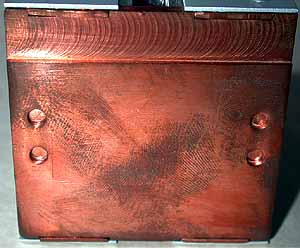 The base is a copper plate that is free from machining marks. One edge is roughly finished, but this did not affect performance. It is 5mm thick (about 3/16″) at the thickest point.

The fan is another Delta 38 clone – this one by Young Lin Tech, model # DFC602512D, 7000 rpm at 7.8 watts; don’t hook this one up to your motherboard’s fan connectors! It is louder than the Delta 38 – I measured it at 72 dBA compared to 70 dBA for the Delta 38 (8″ from the fan’s intake). In addition, I found this fan to have a very annoying high-pitch whine to it – reminded me of a vacuum cleaner you might hear in an adjacent room.

The clip is user-friendly – you don’t need a screwdriver to put this one on. It has good tension and I found it easy to mount and dismount. It is not indexed, so make sure the base does not ride over the bump on the socket.

I prepared the Fortis A102 by boring a hole completely through the base so I could epoxy a thermocouple above the CPU. The thermocouple is attached to an Omega HH23 Digital Thermometer. Ambient temps were measured with a thermocouple placed about 1 inch from the fan’s intake. I used Prime 95 to stress a T-Bird, Duron, Palomino and PIII on an Iwill KK266+, ABIT KT7 and Iwill BD133 (MBM temps are on-die). Arctic Silver grease was used in all tests. CPU Case Temp is the temp at that point where the CPU contacts the heatsink, CPU Back Temps are measured by a thermocouple on the center back of the CPU.

Very competitive C/Ws – results place the A102 in the lower range of heatsinks testing at C/Ws of 0.30 or less. When I see results in the lower ranges, I extend the testing to various CPUs and platforms over different days. In evaluating the range of results, I would recommend that users expect C/Ws of about 0.22 at best.

The Fortis A102 is competitive with a number of all-copper models and is worth serious consideration for Socket A cooling. However, fan noise is a real consideration – some users have abandoned Delta 38s due to excessive noise and the fan on the A102 is noisier.

Fortis includes a tube of silver grease and an “Owner’s Manual” (shows how to mount heatsinks) – both a nice touch. A power adapter to allow the use of a four pin plug should be included as well.

The packaging is nicely done. Fortis includes the phrase “Designed by OVERCLOCKERS” – this is a generic term – we have not participated in any way with Fortis on these products.

SUMMARY: A terrific radiator for space constrained cases with lots of “cooling overhead” for double peltier setups. I have outlined in black marker how a 120mm fan fits; note that drilling holes to mount the fan will be tricky. I


Yet Another Means Of Preventing Condensation